The retreat chronology of the Laurentide Ice Sheet during the last 10,000 years and implications for deglacial sea-level rise 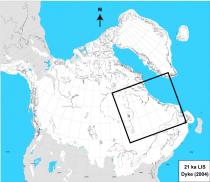 Hide
Figure 3. Age vs. Distance plots for each data transect: Western (top), Central (middle), and Eastern Quebec (bottom). Black points are from radiocarbon dates (Dyke, 2004). Red points in the top plot are from surface exposure dates (Carlson et al., 2007). Retreat rates are calculated using the slope of linear fit in the data and are listed in the white box in each plot. Details

Much of the world's population is located along the coasts. In a world of changing climate, the rate of sea level rise will determine the ability of these communities to adapt to sea level rise. Perhaps the greatest uncertainty in sea level rise prediction has to do with amount of water melting off of Earth's major ice sheets. Recent decades have seen an accelerated loss of ice from Greenland and Antarctica. These bodies of ice may be prone to change more rapid than expected. Greenland and Antarctica contain enough frozen water, which, if melted could raise sea level by 70 m, but predictions on the rate at which this sea level rise could occur depend on scientists' understanding of the complex physics of ice flow (and on future climate scenarios).

Paleoclimate researchers study past climates in hopes of developing a better understanding of our current and future climates. Similarly, understanding past ice sheets will aid in future prediction of ice sheet change. At the end of the Last Glacial Maximum, roughly 20,000 years ago, much of Earth in the northern hemisphere was covered in vast ice sheets. The largest of these ice sheets was the Laurentide Ice Sheet (Figure 1), covering much of Canada and the northern United States with a mass of ice that was nearly 4 km thick in some places. After 20,000 years ago, Earth started to warm, and the Laurentide Ice Sheet began to disappear.

By 8,000 years ago, the Laurentide Ice Sheet was a fraction of its original size, confined mostly to modern day Quebec and Labrador, a size and latitude broadly similar to that of the modern Greenland Ice Sheet. Due to differences in Earth's orbit 8,000 years ago, the amount of solar energy reaching the northern hemisphere was significantly greater than today, while the level of greenhouse gases were nearly equivalent to preindustrial conditions. The sum of these climate forcings combined to produce a surface warming 8,000 years ago that is broadly similar to that expected by 2100 A.D. Therefore, the behavior of the Laurentide Ice Sheet 8,000 years ago may be broadly analogous to the Greenland Ice Sheet in the future. In other words, by looking at how fast the Laurentide disappeared in the past, this might tell us something about the speed at which large ice sheets, such as Greenland, may decline in the future.

Scientists use a number of tools to date the retreat of ice sheets in the past. Radiocarbon and surface exposure dating have been used over much of Canada and the United States to determine when ice left the region. Dyke (2004) compiled a large database of radiocarbon dates in North America. More recent surface exposure dates provide further information on ice retreat in the region. Both types of dates provide constraints on the retreat of ice across the landscape. Sample locations from Quebec and Labrador give information about the disappearance of ice between 6,000-9,000 years ago (Figure 2). Certain regions have more samples than others, but data was selected along three transects (within 100 km of the transect) to assess retreat rates along the Western, Central, and Eastern sides of the former Laurentide Ice Sheet between 6,000-9,000 years ago. By plotting the data as age vs. distance, we can estimate the retreat rate from the slope of the line drawn through these points (Figure 3). Retreat rates are calculated simply as distance divided by time.

The upper bound for Laurentide Ice Sheet retreat around 8000 years ago occurred over Western Quebec (700-900 meters/year). Under elevated warming, this seems to be the fastest that the past Laurentide Ice Sheet melted. Assuming a constant ice sheet shape (constant ratio of area to volume), such ice loss was equivalent to a sea level rise of about 0.3 cm/year (neglecting effects from thermal expansion of the oceans). This rate of sea level rise is similar to that being seen along coastlines today according to the Intergovernmental Panel on Climate Change, suggesting that further analysis of past ice sheets and their regional climate may be helpful in understanding future ice retreat.