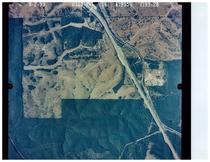 Hide
Figure 3: This stream below the Sheeks Ranch was so choked with gravel that is was impossible to drive across the ford. The gravel was pushed to the side with heavy equipment. Details

In 1983 California businessman Raymond L. Sheeks purchased 40 square kilometers of wooded upland in the Ozark Mountains of south-central Missouri. Starting with steep forested slopes, a relief of 100 meters, thin soils of residual chert and red clay, he proceeded to remove all vegetation from most of his ranch in an effort to create pasture (Figure 1). I will refer to this as the massive deforestation event.

For many years his workers cleared the land. They pushed trees over with teams of bulldozers. This disturbed the soil by bringing the roots of large hardwoods to the surface, an especially damaging process (Phillips and Marion, 2006). The tree trunks were sold for firewood, while the branches and roots were pushed into huge piles and burned. One section was left as a hunting preserve, while small patches of trees were left as shade for the cows. Most of the ranch was, at one time or another, completely barren. Plots were cleared in blocks of several square kilometers at a time. After clearing, the land was fertilized and seeded with a combination of water, straw, fertilizer, and grass seed. At times, it took up to two years for vegetation to establish itself. During that time the soil was bare and erosion was severe. Approximately three years after the land was purchased, much of it was covered by grass (Figure 2).

When workers started to remove trees, many of the farmers on the surrounding land were alarmed. The concern was not only the effect the deforestation had on property below the ranch, but also the effect the deforestation had on wildlife. In the Ozarks, concern for what the neighbor is doing is balanced by a strong sense of property rights. Although many long-time residents were horrified by the deforestation and subsequent erosion, one of the most common responses was "That's his property, and he can do what he wants to with it." Since the ranch also created a few jobs, there was some sympathy for the owner and his experiment, in spite of the fact that it completely changed the character of a large swath of the countryside.

The land was first disturbed by Native Americans when they introduced fire. Natural fires are rare in this region. European settlers in the seventeen hundreds introduced more fires. (Batek et al., 1999) The settlers later raised hogs, whose numbers peaked in Texas County at around 40,000 animals between 1880 and 1920. Their destructive feeding habits may be responsible for a surge of gravel now moving through Ozark streams. (Jacobson and Gran, 1999) Beaver, that had dams every hundred meters along each stream in the Ozarks, were trapped to local extinction (Crausaz, 2004). Since 1940 fires have been suppressed, allowing trees that are not fire-resistant to dominate (Batek et al., 1999). Most of this land was logged twice before the recovered forests were cleared for grazing. Previous logging resulted in low-level disturbance. It involved the selective removal of trees and the use of animals or less destructive machinery. Also, trees were removed over a longer period of time, and were not uprooted, but cut. The other forms of disturbance were also low-level when compared to what followed. Thus the massive deforestation event on the Sheeks Ranch, which constitutes an instant in geologic time, represents a unique experiment in the region.

Wolman has provided a theoretical model for two of the three stages associated with deforestation events leading to urbanization. First is a period of relative stability, as water is drained from woods and farmland. Second is a spike in erosion as land is deforested and soil disturbed. In Wolman's model, the third stage is an urban environment where the cover becomes a paved hydrologic system associated with sewer systems, roof tops, and roads (Wolman, 1967). The massive deforestation event on the Sheeks Ranch followed the first two stages. The final stage involved a cover that was mostly grass and pasture. In a few low spots along floodplains land was utilized for crops.

Distinct waves of gravel are now moving through the fluvial system. While some of these are relatively minor and in remote areas, others have inundated pastures and fords (Figure 3). Many local residents are convinced that these waves of gravel are coming from the ranch as a result of the massive deforestation event. There is some evidence that this is not the case. Sowa (2002) has suggested that the many unpaved roads in the Ozarks are an important source of gravel. Jacobson et al. (2001) suggest that gravel may have been released by an early deforestation event, later logging, or headward extension of gullies. Since any land disturbance will probably result in some erosion and deposition, it is important to be able to answer some of the following questions. (1) What was the result of the very early disturbances? (2) What was the result of the two cycles of logging? (3) What was the immediate result of the massive deforestation event? (4) What came off of the ranch after a vegetative cover of grass was established? (5) Where, exactly, is the gravel that was washed off of the ranch? (6) If it is now stored somewhere in the system, will it be remobilized in the future?

Although there are no quantitative studies that address the massive deforestation event on the Sheeks Ranch, the region represents a unique laboratory. Local farms are typical of those found throughout the Ozarks, and consist of a mixture of crop land, grazing land, and woodland. The adjacent Mark Twain National Forest represents an extensive area that is relatively undisturbed. The Sheeks Ranch, for comparison, involves a significant region devoted largely to grazing that was rapidly, recently, and severely disturbed. It will make a great laboratory for researchers in the future.