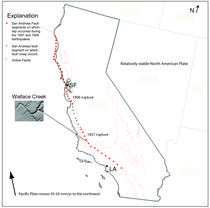 Hide
Figure 1: Wallace Creek is a famous channel which has been offset by the San Andreas fault. The last rupture along this section of the fault was in 1857. The B4 LiDAR data were used in the making of this figure. Details 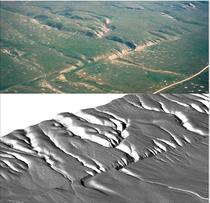 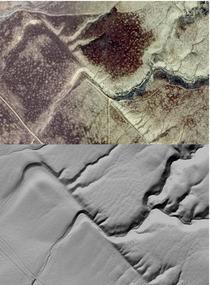 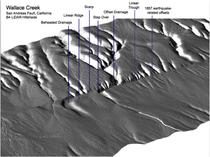 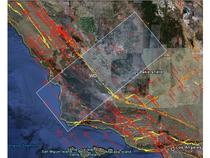 Hide
Figure 5: Interseismic motion along the San Andreas Fault System measured over decadal timescales using the Global Positioning System. The red arrows show the annual velocity of benchmarks relative to stable North America (maximum arrow length is about 50 mm/yr). Focusing on the swath spanning the San Andreas Fault at Wallace Creek (transparent rectangle, one can see that about 35 mm/yr of motion is accumulating across the San Andreas Fault and will be released in a future earthquake. GPS velocities from EarthScope (www.earthscope.org). Orange and yellow lines are active faults from the US Geological Survey Quaternary Active Faults database. Details 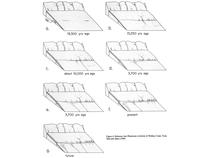 The Carrizo Plain along the San Andreas fault in California is world-famous for its dramatic offset features. Sag ponds, linear ridges, beheaded channels and scarps define the landscape along the fault (Vedder and Wallace, 1970; Wallace, 1975; Sieh and Wallace, 1989; Arrowsmith and Zielke, 2009; Figures 1-4). These geomorphologic features allow for the identification of a right-lateral strike-slip fault. The most famous offset feature is the offset channel at Wallace Creek (Sieh and Jahns, 1984; Figure 1). Using offsets such as the one at Wallace Creek and others nearby, tectonic slip that has accumulated over different timescales can be determined. Knowledge about the release of tectonic slip in earthquakes informs our understanding of the earthquake process and how it relates to the long term relative motion of the plates (Figure 1), and it is a basic ingredient of earthquake hazard assessment. In order to understand how tectonic slip can be determined from offset features, several geologic and geomorphologic concepts must be considered. First, ground-rupturing earthquakes have formed the offsets like the one created at Wallace Creek. Second, these channels form as a result of runoff driven by strong precipitation events, which may or may not occur more often than earthquakes (e.g., Grant-Ludwig, et al., 2010). Channels are subsequently offset by ground-rupturing earthquake events. Thus, the geomorphologist can analyze channels which are offset to determine the timing of ground-rupturing earthquakes, as well as the amount of slip associated with these events. Subsequent geomorphic modifications by erosion and deposition can complicate the interpretation.

Assuming that incision events occur frequently enough to record the tectonic (i.e., earthquake) history, the offsets can be measured to determine tectonic slip. If the channels can be dated accurately, slip rate may be calculated. If the earthquakes can be dated, we can attribute the amount of slip to individual earthquakes (usually the last) or to sequences of earthquakes. Slip released in an earthquake is an indicator of that earthquake's magnitude, and if we divide the slip per event by the slip rate, we calculate an average earthquake return time. The San Andreas has a long slip history. Many older channels have been offset more than once. The main channel at Wallace Creek has been offset 130 meters. However, just south of Wallace Creek, smaller offsets can be measured, some between 5 and 8 meters. Such high gradients in slip (100 m) are not expected. Therefore, Wallace Creek is the result of repeated earthquakes, offsetting the channel multiple times while remaining active.

Researchers have determined via carbon dating of sediments deposited just before Wallace Creek cut down that the currently offset channel is 3700 years old (Sieh and Jahns, 1984). Knowing the total offset of Wallace Creek (130 m) and the age of the channel, an average rate of motion can be easily determined, giving a rate of 35 mm/yr. This is consistent with GPS and other geodetic data measuring the relative motions of monuments spanning this portion of the San Andreas Fault over the last few decades (Figure 5). The monuments are separated by tens of kilometers and measure the broad warping that loads up the fault and which is released abruptly during an earthquake. Thus, the strain accumulation (measured by geodesy) and the strain release (measured by the offset channel) along San Andreas Fault are similar at about 35 mm/yr at Wallace Creek. We do not see any motion immediately at the ground surface at Wallace Creek because the San Andreas fault is locked. As Figure 1 shows, the San Andreas Fault only accommodates about two-thirds of the total relative plate motion between the Pacific and North American Plates. The last ground-rupturing earthquake at Wallace Creek occurred in 1857 (Sieh, 1978). Thus, over 150 years later, the portion of the San Andreas Fault below Wallace Creek has accumulated over 5.25 meters of slip not yet released. Early investigations of the topography and stratigraphy along the San Andreas Fault near Wallace Creek determined that the offset in 1857 (and prior earthquakes) was 8-9 m (Wallace, 1975; Sieh, 1978; Sieh and Jahns, 1984; Liu-Zheng, et al., 2006), which combined with the 35 mm/yr slip rate gave an earthquake recurrence interval of about 250 years (Figure 6). However, looking more closely at high resolution topography and aerial photography around Wallace Creek (Figures 2, 3, and 4), Zielke, et al., 2010 found evidence that slip in the last earthquakes was 5-6 m or less and thus the return period for earthquakes is closer to 140 years or less and similar to what has been determined for the dates of recent earthquakes (Akciz, et al., 2009) and to the elapsed time since the 1857 earthquake.