Factors influencing the distribution of rock glaciers in Idaho 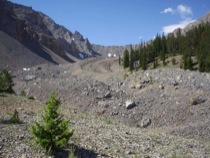 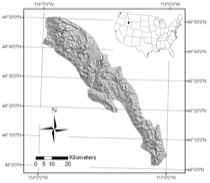 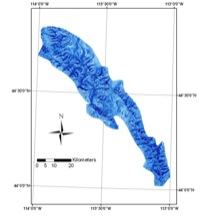 Hide
Figure 3. Map of solar the total number of sun hours per year throughout the entire Lemhi Range. The map was created in Solar Analyst which calculates sun hours based on topography from digital elevation models (DEMs) and the angle of the sun throughout the year. Details 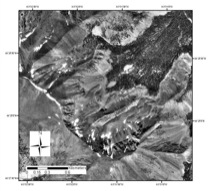 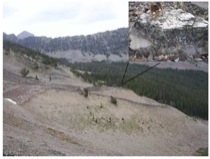 Figure 5. The Mills Lake rock glaciers with an inset showing the large size of clasts on the toe of the feature. Details

Rock glaciers are beautiful flowing lobes of rocky debris that look like glaciers (Figure 1). These amazing landforms form in many locations within alpine valleys including along valley floors, at the base of talus slopes, and in cirque floors of most major mountain ranges around the world. However, rock glaciers occur in alpine areas which are difficult to access and therefore, are rarely studied. The lack of research on rock glaciers has lead to many unanswered questions about how they form, why they form, and what environmental conditions cause them to form. Understanding how rock glaciers form and transport material is important in understanding how alpine landscapes evolve.

The locations of rock glaciers were determined using airplane- and satellite-based imagery of the entire Lemhi Range. Each alpine valley was examined for rock glaciers and a database was created that included the location of the valley, whether or not a rock glacier was present, and information about the geography of the valley. This information included the elevation, aspect (direction the valley faced), rock type, and slope for each of the valleys. Additionally, a map was created using Solar Analyst to determine the amount of sunlight that each valley would receive in a year based on topography (Figure 3). Rock glaciers were also examined in the field for signs of activity and for a general assessment of their morphology. This included measuring the angle of the rock glacier toe (which lessens in inactive glaciers) and searching for sink holes on the rock glacier's surface (which form as ice melts from within the rock glacier). The data was combined with information from the aerial photographs to determine whether each rock glacier was active, static, or dead.

Mapping showed that distribution was not equal throughout the Lemhi Range, but rather they seem to be clustered in some areas while no rock glaciers are present in others. The database created during mapping was used in an attempt to determine why the rock glacier distribution was uneven. A statistical program known as multiple analysis of variants (sometimes abbreviated as MANOVA) was used to analyze the data. MANOVA was used to examine each parameter in the database statistically, both individually and together, to determine which factors influenced the distribution of rock glaciers the most. It was found that annual sunlight hours and rock type were the strongest factors influencing the distribution of rock glaciers. In fact, while both factors were strong individually, their combination was even stronger.

It seems logical that the number of sun hours affects the distribution of rock glaciers. After all, rock glaciers need cold temperatures and direct sunlight is the primary source of heat in high elevation areas. Thus, rock glaciers tend to form in topographically shaded areas including under steep cliffs and on the north and northeast side of large peaks (Figure 4). Very few rock glaciers in the Lemhi Range form on south facing slopes because the sun in the northern hemisphere moves across the southern sky increasing the amount of sunlight falling on south facing aspects.

The fact that rock type affects the distribution of rock glaciers initially seemed strange. As the idea was further examined, it became apparent that rock glaciers were much more likely to form in rock types that produce large diameter debris (Figure 5). The hypothesis is that large clasts are important because they create air filled gaps within the debris that act as insulators, similar to the vacuum space between the walls in an insulated mug. This hypothesis is difficult to test because the inside of a rock glacier is very inaccessible and the excavation of large boulders in alpine areas is nearly impossible. However, it is the most reasonable explanation based on the data that has been collected.

It might have been expected that regional climate would have played a stronger influence on the distribution of rock glaciers. For instance, it was initially hypothesized that elevation would have played a stronger role in their distribution. The fact that elevation does not play a larger role implies that the general climate is relatively uniform throughout the range and that smaller factors, along with microclimates, are significantly more important in understanding rock glacier distribution.