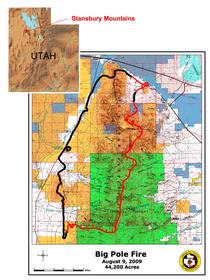 Hide
Figure 1. Map of the general location and extent of the 9 August, 2009 Big Pole Fire (red star) in the northern Stansbury Mountains, Utah. Black line shows original "line of fire" (where the fire broke out) and the red line delineates the upslope extent of the burn. Details 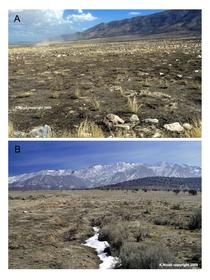 Hide
Figure 2 A) The Big Pole Fire exposes the cobbles and gravels that make up the alluvial fan developed off the west-facing flank of the Stansbury Mountains. This north-facing view near the Muskrat Canyon Fire Station at ~ 5600-6000 ft was photographed on 14 September, 2009 and looks onto patches of burned vegetation, which appear scorched and blackened. Some regrowth of grasses has occurred after rainfall. Note the dust devil in the distance that is moving across the burned surface. B) Gully initiation is apparent looking up the alluvial fan; this view is looking eastwards toward the Stansbury Mountains (highest elevation point ~8300 ft); the location of this photo is south of Broon’s Canyon. Snow fills the deepest gully. Details

Figure 3 Flowchart of process-response variables after a fire disturbance event, after Swanson (1981). Details 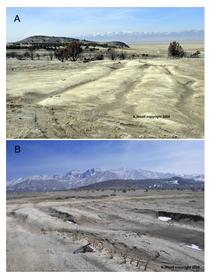 Hide
Figure 4 A) Photo looking east off the Stansbury Mountains pediment. Rills have formed in the alluvium; rock hammer for scale near the rill on the left. Past the burnt snags, Skull Valley is in the mid-ground, and the Cedar Mountains are in the distant background. B) Photo looking east to the Stansbury Mountains. Sheetflow-carved relief in the burned area is up to 3 feet (1 m). Rock hammer for scale. Details

Hide
Figure 5 Photo of a significant dust storm on 14 September 2009, about a month after containment of the Big Pole Fire. Details

Introduction On August 6, 2009, a lightning strike caused the Big Pole Fire to break out in Skull Valley on private and Federal lands managed by the Bureau of Land Management, the US Forest Service, and the State of Utah. The ~43,923 acre fire affected the western Stansbury Mountains, located about 40 miles west of Salt Lake City, in Utah (Figure 1). This fire event provides a valuable opportunity to observe changes in the local semi-arid ecosystem and landscape. This vignette offers a virtual tour of the burn site and documents some geomorphic effects of the fire, including dust storms and erosion caused by sheetflow from two major thunderstorms in Late August and September 2009.

Regional Geological Setting The Stansbury Mountains are located within the Basin and Range physiographic province, which is an extended terrain located west of the Rocky Mountains (Stokes, 1987). The Great Basin is characterized by a series of long, parallel, north and south trending ranges separated by broad valleys. Skull Valley is filled with unconsolidated alluvium, colluvium, and lakebed deposits derived from Lake Bonneville, the Pleistocene precursor of the modern Great Salt Lake.

Geomorphology The Stansbury Mountains consist of Cambrian through Pennsylvanian quartzites, carbonates, and shales that were deformed during Mesozoic compression and Cenozoic extension. In general, the western side of the Stansbury Mountains is bound by a north-trending normal fault zone, and is a province with a moderately well-developed piedmont extending to the valley floors. Broad alluvial fans of cobbles and gravels coalesce off the mountain-front (Figure 2A). Elevations range from 4500 feet at the valley floor to over 10,000 feet on the highest peaks.

The Big Pole Fire Burn Area In assessing a fire, analysts consider many variables, including the fuel available to burn, fire ignition, and other behavior such as the style of spread and the severity. Most of the area burned in the Big Pole Fire is located along a dry, west-facing 8-30% slope with poorly-developed soils comprised of very gravelly loam. Shadscale (Atriplex sp.) and sagebrush (Artemisia sp.) are major components of the steppe (Figure 2B), with antelope bitterbrush (Purshia tridentata), bluebunch wheatgrass (Pseudoroegneria spicata spicata), and bluegrass species (e.g., Sandberg Poa secunda) dominating the lower Skull Valley bottoms and piedmont; this region is currently not grazed. Upslope, the steppe includes Utah juniper (Juniperus osteosperma), mountain mahogany (Cercocarpus ledifolius), and serviceberry (Amelanchier utahensis or alnifolia) at mid-elevations, and becomes a mixed-conifer Douglas Fir (Pseudotsuga menziesii) and White Fir (Abies concolor) forest at the higher elevations and north-facing slopes.

Ignition A lightning strike ignited the grasses in the timber understory, which is the prevailing fuel type in the region. In places where there was heavy timber pockets, single-tree torching occurred, and the fire took short uphill runs. Extreme fire behavior was experienced with rapid rates of spread and wind gusts > 50 mph. In many parts of the Skull Valley portion of the burn area, heavy fuel loads of sagebrush and dry grasses facilitated the complete consumption of available fuels; in patches where all vegetation was killed off, the landscape was left with no residual cover. The fire was deemed 100% contained by the USFS on August 16, 2009 @ 1700 hrs (red line, Figure 1).

Fire frequency Typical fire return intervals in sagebrush-steppe ecosystems like the Stansbury Mountains are approximately 30-100 yrs, although this return interval has been shortened in many areas invaded by non-native grasses such as Bromus tectorum (cheatgrass); this species has invaded nearly 25 million acres of the Great Basin sagebrush steppe ecosystem (Bradford and Lauenroth, 2006). Cheatgrass quickly outcompetes native grasses -- it provides a fuel that is highly susceptible to fires, and it germinates and establishes early in the growing season before native perennial grasses can take hold (Mutch 1967; Bradford and Lauenroth 2006). Some studies demonstrate that cheatgrass dominance has reduced the mean fire return to less than 10 years. Enhanced fire frequency perpetuates cheatgrass expansion, quickly depletes the sagebrush seed bank, and converts native vegetation to an annual grassland dominated by highly combustible grasses (Whisenant 1990).

Effects of a fire event Fire may be viewed as a disturbance event with cascading effects. Figure 3 shows a process-response diagram of the main effects after a fire disturbance. The main biotic effects of fire include replacement of invasive species and the forest stand. The geomorphic effects of fire include debris flows, landslides, and enhanced erosion by wind and water. Local water quality may also be adversely impacted.

After a fire, surface runoff is often increased (Swanson, 1981). The combustion of vegetation and protective ï¬‚oor material (litter) results in the exposure of bare soil to overland ï¬‚ow and raindrop impact (e.g., White and Wells, 1979; Wells, 1981), causing an increase in erosion. Fire-induced water repellent soil conditions and changes in hydraulics and infiltration further affect the local soil-water balance in burned areas. Following a fire, surface runoff and sediment yield may increase by a factor of 9-100 times the normal conditions (Giovannini and Lucchesi, 1991). Effects may be noticed within the watershed at the channel-to-hillslope scale.

Observed Effects of the Big Pole Fire In the region affected by the Big Pole Fire, enhanced erosion was noted in the fire-affected region. Rills and gullies formed on the alluvial fan surface shortly after the fire (Figure 4). Enhanced sheetflow and erosional removal of the alluvium has created relief up to 3 feet (1 m) on an alluvial fan.

Across the area burned by the Big Pole Fire, wind erosion was enhanced in places with exposures of bare soil via dust storms, saltation and deflation. A fire disturbance increases the erosivity of the land surface by impacting and killing-off the vegetation, decreasing surface roughness, and thereby increasing winds. Figure 5 depicts the degree of regional aeolian mobilization. A recent study of wind erosion following lightning-ignited wildfire in sagebrush steppe environments in Idaho documented that soil erosion increased following a fire, then diminished through the period of spring green-up to levels only slightly greater than in an unburned site (Sankey et al., 2009). In the sagebrush-steppe vegetation community, restoration efforts in the burned areas might include post-fire seeding in order to grow grasses to mitigate erosion. However, desert shrub steppe plants do not quickly re-establish, and it may take decades or centuries for a vegetative community to recover.

Implications Since sagebrush steppe is one of the most threatened vegetation types in North America (Noss et al. 1995), it is critical to understand the abotic and biotic thresholds that influence its ecosystematics and sustainability in the face of disturbance such as fire. Future long-term studies might quantify the water runoff and sediment yield from burnt slopes. More fieldwork and vegetation mapping, in addition to several years of continual monitoring of the local meteorological conditions, runoff and erosional processes, will enhance our understanding of the interplay between fire disturbance and landscape processes.

« Geomorphic Evolution of the Upper Basin of the Tigris River, Turkey       Factors influencing the distribution of rock glaciers in Idaho »