Geomorphic Evolution of the Upper Basin of the Tigris River, Turkey 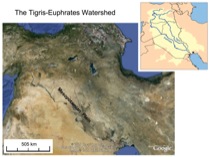 Hide
Figure 1 Rising in the mountains of southeastern Turkey, the Tigris River flows along a 1,899 km (1,180 miles) course and southeast through Iraq, where it forms the perimeter of the fertile Mesopotamian Plain. Eventually the Tigris merges with the Euphrates to become the Shatt al Arab, which then flows south to the Persian Gulf, depicted in the lower right of the regional (inset) map. Details 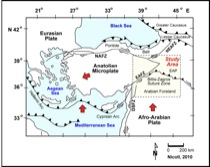 Hide
Figure 2 The modern or neotectonic setting of eastern Turkey (Nicoll, 2010). The collision of the African and Arabian plates with the Eurasian Plate along the Hellenic Arc to the west and the Bitlis – Zagros Suture zone to the east. Continuing convergence is accommodated by left-lateral movement on the Dead Sea transform fault and subduction at the Hellenic Arc. Arrows show resultant plate motions. Dashed line box outlines the general area of the Upper Tigris Basin located within the Arabian foreland and the high-elevation Eastern Anatolian Plateau (EAP). The main strike-slip faults in the area include the EAFZ (Eastern Anatolian Fault Zone), the NAFZ (Northern Anatolian Fault Zone), and the NEAFZ (Northeastern Anatolian Fault Zone), which are related to the DSFZ (Dead Sea Fault Zone). The primary mountain ranges are labelled. Details 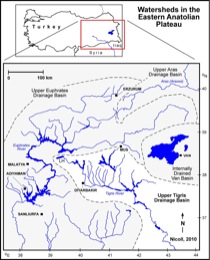 Hide
Figure 3 The geographic location of watersheds with headwaters in the highlands of the Eastern Anatolian Plateau (EAP) of southeastern Turkey. Dashed lines delineate the major drainage areas. Details 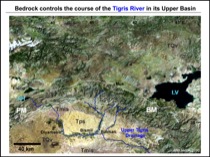 Hide
Figure 4 Enhanced Google Earth™ image showing bedrock-control of the Eastern Taurus Mountains along the Upper Tigris course. Labels – LH for Lake Hazar; LV for Lake Van; PM and BM are metamorphic massifs that are part of the Bitlis-Zagros Suture Zone. Tps labels outcrops of a evaporite-bearing conglomerate called the Selmo Formation. Tmls are carbonate rock units of interbedded marl, dolomites, and salts associated with the evaporation of the ancient seaway between the continent-continent collision zone. TQv are Tertiary-Quaternary volcanics. The white dashed line is the perimeter of the Upper Tigris Basin watershed. For further details, see Nicoll, 2010. Details 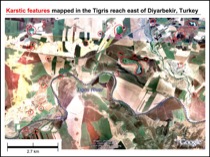 Introduction The Tigris is one of Antiquity's famous rivers, as it flanks the fertile strip of land known as the Mesopotamian Plain, the heartland of the mighty biblical empires of Sumeria and Assyria (Figure 1). The Tigris River headwaters are at Lake Hazar in the Taurus Mountains of southeastern Turkey, in a highland region called the Eastern Anatolian Plateau (EAP). The EAP is part of the active Alpine – Zagros – Himalayan orogeny, a mountain belt that developed its topographic relief upon the closing of the Southern Neo-Tethyan Ocean, when the African and Arabian plates began colliding with Eurasia (Figure 2). Perhaps the most famous (or infamous) locale in this uplifted highland plateau is the ~5165 m (16946 ft) stratovolcano Mt Ararat, which is celebrated as the traditional resting place of Noah's Ark after the diluvian floodwaters departed.

Why study Big Rivers in a collision zone? Study of large river systems like the Tigris provides insights about the interplay of lithospheric deformation and surface processes, as plates collide and mountains are built and eroded. The Tigris River has been geomorphically active over the past 13 million years, since the uplift of the EAP. Landscape features at aerial and ﬁeld scales show that the Tigris River valley morphology varies by reach, attesting to a complex evolution of the drainage system. First and foremost, the drainage morphology in the Upper Basin is linked to the uplift of the eastern Taurus Mountains, and deformation of the Arabian foreland system during continent–continent collision. The evolution of the Upper Tigris can be reconstructed as a function of vertical movement (e.g. base-level changes, tectonic uplift, doming, downwarp, and sagging), horizontal deformation (e.g. folding, faulting, compression, and extension), and volcanism. Weathering of the landscape has involved dissolution processes and karstic erosion of local carbonate and evaporite bedrock.

Regional Setting and Surface Hydrology The modern climate in this part of the Tigris watershed is semi-arid with hot summers and cold winters; the average precipitation is about 580 mm, which mostly falls as snow. As such, the region is a cold-steppe desert with natural vegetation elements that include woody shrubs and occasional Mediterranean elements. Ice and snow melting from the EAP highlands are important water sources for the local drainages, and as the main source of drinking water for the large local population. The Aras (also known as Araxes) River drains eastwards to the Caspian Sea. The internally-drained or endorheic Lake Van Basin is rimmed by active volcanoes, including Mt. Ararat. The Upper Euphrates Basin is larger in size, with several long fluvial branches. The neighboring Upper Tigris Basin is smaller than the Euphrates Basin in area, and the development of its tributaries is strongly asymmetric. The Tigris River is separated from the Upper Euphrates Basin by a narrow topographic divide that is controlled by displacement along the East Anatolian Fault Zone, which is a strike-slip fault system comparable to the San Andreas Fault system in California (USA) (Figure 3).

Headwater Reaches of the Tigris Emanating from its spring source at Lake Hazar, the Upper Tigris becomes a transverse river systemthat ﬂows across the strongly deformed metamorphic rocks that are part of the Bitlis – Zagros Suture Zone. Transverse drainages are discordant river patterns whose flow directions cut across geological structures such as faults, folds and the regional tectonic fabric in an area. Figure 4 shows how the course of the Tigris River in its headwater reaches cuts across the rugged structural grain evident in the metamorphic massifs making up the Eastern Taurus Mountains.

A Transverse Stream Course After the Tigris cuts through the Taurus Mountains, the Tigris easily traverses a carbonate platform sequence (unit Tmls on Figure 4), upstream of Diyarbakir before it cuts across basaltic volcanic units (unit TQv on Figure 4). These Tertiary and Quaternary basalt flows are unconformable on the Tmls limestones and appear as the dark units north of Diyarbakir City. The basalts are strong units that buttress the river flow along its right (or south and westerly) bank.

...and an Antecedant Stream Course At the junction of the Arabian Plate south of the Suture Zone, the Tigris River may be viewed as an antecedent stream system that developed since the Miocene, after the close of the ancient seaway between the Afro-Arabian and Eurasian plates. An antecedent river has a drainage network pattern that was established in the geological past, and has remained preserved during regional uplift, because the rates of fluvial incision were higher than the rates of uplift. The antecedent river followed a course that parallels the developing orogen (dashed white lines on Figure 4).

...and then, a Karstic Stream Course East of Diyarbakir city, the river course shifts and trends east-west, as it erodes through fractured Miocene and Pliocene limestones, shales, and conglomerates that are thinly interbedded with salts. In this region, erosion of the bedrock (unit Tps) and valley widening is controlled by karst processes in bedrock made of evaporites and carbonate (Schumm et al., 1995) (Figure 5). Mapping in the area east of Bismil, sapping, piping, subsurface collapse features are apparent. The karstic processes are concentrated in folds paralleling the suture zone and the mountain orogen to the north (near the dashed white line in Figure 4). Sinkholes and groundwater sapping features have developed in the landscape during the past decade.

Conclusions Continent-continent collision and resulting orogeny in this region of southeastern Turkey has exerted a strong control on the local geomorphology and drainage development. Tectonic uplift and defomation, in addition to rock lithology, are the prevailing controls on the Tigris River as it drains the highland area known as the EAP (Eastern Anatolian Plateau). Climate factors contribute to the erosion in the Upper Tigris Drainage Basin; karstic erosion is one of the processes that contributes to valley widening, particularly in areas where sedimentary rocks comprise the local bedrock.