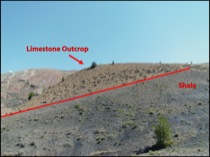 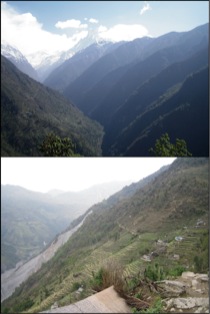 Rock resistivity to erosion plays a vital role in the evolution of the Earth's topography. Since different rock types exhibit different levels of resistivity to erosion, the more resistant rock types tend to develop more prominent topographic formations in the landscape overtime. Comparing topographic parameters, specifically slope and curvature, of the Earth's surface for different rock types using Geographic Information Systems (GIS) can help us advance the frontier of landslide prediction and our understanding of mountain belt formation and destruction.

How can you extract a topographic signature of a rock type from the landscape?

Slope and curvature of the landscape for each rock type

Slope can be extracted directly from the topography in ArcGIS using the slope function within the spatial analyst toolbox. In a GIS system, the slope is defined as the rate of change of elevation in the direction of the steepest descent at each grid cell in the DEM. Curvature describes how much a surface is curved at a particular point in the landscape. Mathematically, curvature is defined as the reciprocal of the radius of a circle that is tangent to a point on a curve [Roberts, 2001]. Tightly folded terrain has large curvature values, while flat terrain has zero curvature. Roberts (2001) uses the surface skin of an apple and the mathematical plane carved from a knife to help visualize the concept of curvature. If you cut the top of an apple off, it creates a much smaller circle than if you slice an apple through the middle. The curvature of the smaller circle will be much larger because of the tighter bend of the line required to complete the circle. An infinite number of cuts can be made through the apple, allowing an infinite number of curvature values to be extracted. According to Roberts (2001), the most useful subset of curvatures is defined by planes which are orthogonal to the surface: maximum and minimum curvature. Averaging maximum and minimum curvature yields the mean curvature. The slope and mean curvature grids created from a 25 m DEM of the Modi Khola valley are shown in Figure 3.

Once slope and curvature grids are generated, slope and curvature values can be extracted for each lithologic unit in the study region using the zonal statistics tool in ArcGIS. Using the zonal statistics tool you can create a series of maps coloring each lithologic unit by the mean, minimum, maximum, range, and standard deviation of the slope and curvature values distributed across the topography in each rock unit. The zonal slope statistics maps illustrate significantly high slope values in the Greater Himalayan rocks that vary from 1 to 79 degrees slope. The Lesser Himalayan rocks tend to have lower slope values than Greater Himalayan rocks and vary only between 1 and 65 degrees slope. Slope values do not increase from south to north consistently, but rather fluctuate as they cross different lithologic units. Formation II, Lower foreland basin strata, undivided Gondwanas, Dhading, and the Ulleri granite all exhibit significantly higher mean slope values than other lithologies (Figure 4). Consequently, dips and peaks that occur in slope data from the north to the south are well reflected by the average curvature data. Peaks in slope data correspond to positive curvature values or convex topography, while dips in slope data relate to negative curvature values or concave topography. The zonal mean curvature maps visually delineate this fluctuation of positive to negative curvature across the range (Figure 5). Overall, the topographic fingerprints of lithologies in the Modi Khola valley exhibit only subtle differences in slope and curvature.

Studies of lithology and topography in New Zealand show that regions with varying rates of precipitation and tectonic uplift express the same average slope of 39 degrees for regions comprised of the sedimentary rock greywacke [Korup et al., 2008]. However, Korup et al. (2008) emphasize that the topographic signature of the underlying bedrock may not be reflected unless hillslopes are at the limit of their mechanical strength, which would produce landsliding. The Modi Khola valley receives extreme amounts of precipitation (up to 8 m/yr in some parts) [Bookhagen and Burbank, 2006], which produces frequent landslide events. While rock type likely plays a pivotal role in landscape evolution, perhaps extreme climatic conditions of the Himalaya altered the topography and erased or concealed the topographic signature from lithologies in the Modi Khola valley. Landslide events cover the terrain with debris, resculpting the landscape, regardless of the location of different lithologic units. The frequent mass-wasting occurring in the Modi Khola valley may have covered the expected expression of different rock types in the landscape. The subtle differences in the topographic signature of lithologies in the Modi Khola valley further illuminates the importance of other mechanisms responsible for landscape evolution processes. Perhaps extreme climatic and tectonic conditions prohibit the topographic signature of rock types to express themselves in the landscape. For each environment of study, the balance between tectonics, erosion, and composition of the Earth's material drive the landscape evolution process. The weight and role of each factor in sculpting of the landscape may vary across different environments on the Earth's surface.

« Digital Topography: Should you choose a TIN or raster interpolation of the landscape?       Geomorphic Evolution of the Upper Basin of the Tigris River, Turkey »