Comparative planetology: the geomorphology of volatile cycling and catastrophic flooding

Department of Earth and Planetary Sciences, University of Tennessee

Hide
Figure 1: Oblique aerial photo of jökulhlaup at Skeiðarársandur, south Iceland, 6 November 1996. Photo was taken about 10 hours before the peak discharge at this location. The Vatnajökull glacier is off the image to the right. The two-lane bridge in photo centre suggests scale. The remainder of the bridge was swept away about one hour after this photo was taken. (Photo credit: Helgi Bjornsson, University of Iceland) Details 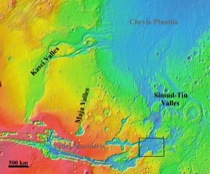 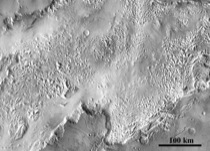 Hide
Figure 4: Image mosaic from the Descent Imager/Spectral Radiometer on the Huygens probe, showing inferred fluvial channels and a dry lake bed shoreline. The image is ~12 km wide. The arc in the lower right is an artificial marking. (Image Credit: ESA/NASA/JPL/University of Arizona). From Burr et al. 2009a. Details

INTRODUCTION: Three planetary bodies in our Solar System show landforms that provide evidence of liquid flowing over the surface, either at present or in the past. The surface flow of liquid is evidence for a volatile cycle -- the cyclic movement on a planetary surface of materials that transition easily among vapor, liquid, and solid states. Fluvial landforms result from the ordinary or average flow of liquid, whereas flood-formed landforms result from extra-ordinary liquid discharge. Earth's fluvial and flood-formed landforms and processes provide the template for understanding similar landforms on other planetary bodies. However, the flood formation mechanisms on other bodies may not all have terrestrial analogs.

EARTH: Earth, of course, has an active hydrological (water-based) volatile cycle. This cycle encompasses a suite of features that includes rivers, lakes, oceans, groundwater, and glaciers. As one element of this suite, catastrophic flood channels convey extremely large flows -- on the order of a million cubic meters per second -- , which are similar in magnitude to massive ocean currents like the Gulf Stream. These catastrophic flood channels formed through a variety of mechanisms. The largest paleofloods on Earth are associated with glaciation, resulting from outbreaks of voluminous meltwater ponded beneath glaciers or behind glacial lobes. The Altai Mountains in Siberia (Carling et al. 2009), the Channeled Scabland in Washington state, USA (Baker 2009), and subglacial Laurentide Ice Sheet floods (Kehew et al. 2009) provide examples of this association. This glacial flooding may be triggered by volcanism or enhanced geothermal heat flow, such as may result from subsurface magma emplacement. The relationship between glacial flooding and volcanism is illustrated by contemporary jökulhlaups (glacial outburst floods) in Iceland (Figure 1) (Bjornsson 2009), in which volcanic heating produces enough glacial meltwater eventually to float or break through the glacier ice barrier as a flood. Volcanic calderas in particular can generate extreme break-out floods (Manville et al. 2007), in part because of the space available to collect large volumes of meltwater before release. Volcanism and glaciation are also indirect causes for debris-dam floods O'Connor and Beebee 2010), which are produced by failure of dams of volcanic deposits and glacial moraines, respectively. The smallest floods on Earth originate from extreme precipitation events, e.g., monsoons.

MARS: On Mars, valley networks, glacial features, and polar ice caps all provide evidence for a more energetic hydrological cycle in the ancient past, although today much or all near-surface water on Mars is in the form of ice. Relict catastrophic flood channels are one of the most striking landforms on the surface of Mars. Based on age-dating of the surfaces of these flood channels, catastrophic flooding on Mars may be divided into three categories which roughly correspond with Mars' three time periods or epochs. Mars' smallest flood channels date to the Noachian epoch (3.8-3.5 Ga) and originate at large impact craters or intercrater basins (Irwin and Grant 2009). Because of their origination at impact craters and in view of other evidence for precipitation on early Mars, these flood channels are inferred to have resulted from overflow of impact crater paleolakes originally fed by precipitation. Mars' largest flood channels (Figure 2a) date to the Hesperian epoch (3.5-1.8 Ga) and generally originate at 'chaos terrain' (Figure 2b) (Coleman and Baker 2009). These scarp-bounded, collapse areas may have released pressurized groundwater due to magmatic and/or cyrospheric processes. Flood channels dated to the Amazonian epoch (1.8 Ga to present) originate at volcanotectonic fissures (Figure 3) (Burr et al. 2009a). These fissures may be the surface expression of dikes and/or extensional tectonics, either of which could have tapped groundwater aquifers.

TITAN: Titan, the largest moon of Saturn, has an average surface temperature of 94K (-180C or -290F). Thus, all the water on the satellite is frozen into an icy crust. Nonetheless, Titan has a volatile cycle, apparently active, based on hydrocarbons combined with liquid nitrogen. Some results of this volatile cycle include branching networks interpreted from near-surface images as alluvial valleys with inset fluvial channels (Figure 4) (Tomasko et al. 2005, Perron et al. 2006). Radar images acquired from orbit also show fluvial networks (Lorenz et al. 2008) with a variety of network morphologies (Burr et al. 2009b). These features observed from orbit are commonly termed channels, a term which connotes periodic bankfull flow, although the large size and the morphology of these features suggests that they may instead of alluvial valleys (Burr et al. 2009b). Flooding on Titan occurs with very different materials and conditions than on Earth and Mars. Flooding on these inner planets entails water flow and the sediment is silicate material derived from the crust. In contrast, flooding on Titan likely entails liquid hydrocarbon (mostly methane) flow and the sediment is either water ice derived from the crust or organic material deposited out of Titan's atmosphere. Despite the differences in materials and in gravity, however, theoretical modeling indicates that the liquid viscosity, sediment density, and gravity on Titan combine to produce similar sediment transport parameters as for Earth and Mars. This similarity may explain in part why images from the Cassini-Huygens mission show 'surprisingly Earth-like' morphologies. In addition to fluvial networks, these morphologies include anastomosing channels similar to terrestrial desert flood channels. On Earth, these desert flood channels are produced by monsoonal rains. Titan is hypothesized to have a 'methane monsoon,' on the basis of theory and cloud observations. Unlike on Earth and Mars, glaciation likely does not occur on Titan, given the low triple point of hydrocarbons. Cryovolcanism and impact cratering may have generated debris dam floods analogous to those on Earth and Mars, although data supporting such processes is not yet evident. Thus, whereas monsoonal precipitation produces the smallest floods on the terrestrial planets, it likely produces the largest floods on Titan (Burr 2010).

In summary, catastrophic flood channels are one striking landform that gives evidence of volatile cycling. A variety of mechanisms can produce flooding, and the dominant mechanism(s) change(s) according to context. Despite these differences, however, increased understanding of flood- and fluvial landforms on Earth contributes to our understanding the history and current occurrence of volatile cycling on Mars and on Titan.