Landscape inversion on Earth and Mars 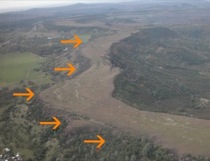 Hide
Figure 2: Oblique aerial photograph of the Stanislaus Table Mountain, near Columbia, CA, USA (orange arrows in fore- and middle-ground point to its left side). The Table Mountain is a lava-capped paleochannel dating to the Miocene. Details 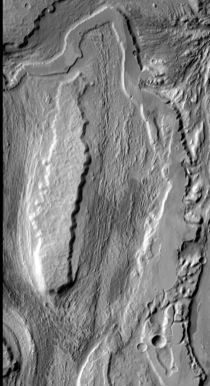 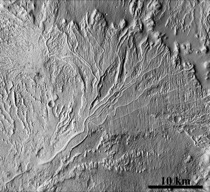 Hide
Figure 4: CTX image of a network of sinuous ridges, inferred to be cemented paleochannels. These inverted fluvial features are located between the Aeolis and Zephyria Plana on Mars, within the Medusae Fossae formation. The north-south lineations are inferred yardangs. Details

PROCESS: Landscape inversion is the process whereby relative topographic elevations become inverted such that previously low-standing features become high-standing. This relief inversion occurs through induration (increased hardness or resistance to erosion) of a specific feature or features within the landscape, and the subsequent erosion of the less-indurated surrounding material. Thus, an inverted landscape immediately implies a multi-stage history of development.

The induration may occur through a variety of mechanisms, including geochemical cementation, armoring by a coarse-grained deposit, or capping or infill by lava. On Earth the regional erosion that follows is usually a result of relative sea level drop, due either to glaciation or to tectonic uplift.

EXAMPLES ON EARTH: Relief inversion may occur in a variety of landscapes. For example, mesas and buttes exist on the central Colorado Piedmont. These landforms are capped by Eocene age conglomerates and tuffs, which were originally deposited into topographic lows. These resistant lithologies have preserved the more erodible underlying formation, so that these previous topographic lows now form the high-standing mesas or buttes dotting the region [Figure 1]. In some cases, erosion of the capping lithologies produces mantling of the lower slopes of the buttes, resulting in erosion in the butte centers. The products of this secondary inversion are annular features with a topographic low in the middle, termed 'talus flatiron rings' (Morgan et al. 2008) [Figure 1].

Landscape inversion has also been documented on hillslopes as a result of armoring, a process also termed 'gully gravure. In western Virginia, USA., former valleys or 'dells' now form higher-elevation 'noses' (Mills 1981). In eastern Tennessee, armoring of rilles in roadcuts has been shown to produce surfaces elevated by differential erosion above the surroundings (Osterkamp and Toy 1994).

EXAMPLES ON MARS: On Mars, a variety of inverted landforms have been suggested (Pain et al. 2007). For example, small, flat-topped buttes are hypothesized to be inverted impact craters. Although some common indurating mechanisms such as lava infill may be ruled out by the context, the precise indurating mechanism(s) for these features are not yet established.

Former channels are perhaps the most distinctive inverted feature on Mars. In some cases, the largest and oldest of these proposed inverted channels have been attributed to lava capping [Figure 3] (Rhodes 1981). More recent and higher resolution data of Mars has revealed a plethora of sinuous ridges, inferred to be inverted paleochannels. Some of these features are found on high-standing terrain, such as near the rim of Valles Marineris, the 5000-km-long, 10-km-deep rift system on Mars. The location and morphology of these features indicate former rainfall at this elevated location. Other inverted fluvial features are being exhumed from within surrounding units. Indeed, the most populous cluster of inverted fluvial features on Mars is located at low elevation between the Aeolis and Zephyria Plana, where the features are being exhumed by aeolian abrasion from within the friable Medusae Fossae Formation [Figure 4] (Burr et al. 2009). The exhumation process has revealed a range of feature morphologies, interpreted as inverted channels and floodplain meander belts, showing scroll bars. These features are often closely spaced and may even be stacked stratigraphically [Figure 5], indicating a substantial history of repeated fluvial flow.

In orbital imagery, inverted stream channels can be hard to distinguish from eskers, linear sedimentary deposits associated with glacial meltwater stream. The longitudinal profile of the feature can provide diagnostic information -- rivers only flow downhill, whereas esker may trend uphill due to the pressure of the overlying ice. However, uneven inversion or post-formation tectonism can also produce uphill-trending longitudinal profiles. Thus, additional evidence of glaciation, in the form of other glacially produced landforms, is useful to substantiate a glaciogenic hypothesis.

SUMMARY: Inverted morphologies comprise an unusual suite of landforms, including inverted basins, hillslopes, impact craters, river channels, and floodplains. Their correct interpretation, though challenging, provides evidence of a multi-stage sequence of events, including the original creation of the landform, then its induration, and finally its inversion. On Mars, inverted landforms are providing us with important clues to the geologic history of that planet.