Fluvial geomorphology in a tank - The scientific value of physical experiments 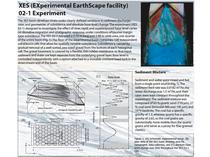 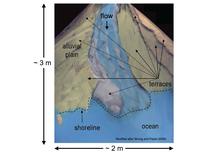 Hide
Figure 2. Example of the complex topography of multiple unpaired terraces that formed during accelerating rates of relative sea level fall in the experimental basin during XES02. Details

Hide
Figure 3. Illustration of how the braided multi-channel experimental system narrowed and widened in response to falling and rising sea level. Details 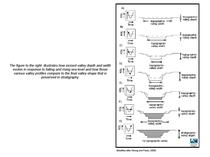 Hide
Figure 4. Conceptual illustration of how incised valley depth and width evolved during one complete sea level cycle in the experiment. Details 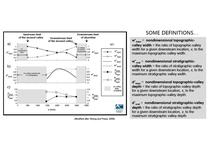 Hide
Figure 5. Downdip change in topographic and stratigraphic valley width and depth in the XES02 experiment. (Modified after Strong and Paola, 2008) Details

The beauty and utility of experiments is to illuminate the fundamental processes that drive the evolution of natural systems. Experiments help us build intuition for processes that otherwise might be hard to 'visualize' Experiments are also useful hypothesis testers. But most of all experiments have the potential to completely change how we think about our science and to challenge our assumptions as to how natural systems evolve.

Here we use data from a physical experiment to generate insight into the relationship between the geomorphic processes that drive valley incision and filling and the stratigraphic record left behind from these processes. The following observations come from an experiment (XES-02) (Figure 1) conducted in the Experimental Earthscape Facility at St. Anthony Laboratory at the University of Minnesota. For more information about the experimental set-up and a more detailed discussion of the experimental results please refer to the URLs and references listed below.

Definitions:
Topographic Valley: A valley observable on the Earth's surface today. A valley defined by topography. A topographic surface that represents an instant in time. A synoptic surface.

Stratigraphic Valley: An erosional surface preserved in the stratigraphic record who's shape and dimensions are similar to those of observed topographic valleys.

One reason that this distinction is important is that Incised valley geometries and fill are often used to infer the record and effects of sea level change on coastal environments, both as a tool in petroleum exploration and to better understand the environmental consequences of sea level change. Another reason that this distinction is important is that a common interpretation of incised valley terraces and cyclic variation in valley fill sediments is that they reflect discrete external (allogenic) forcing mechanisms, including high frequency climate change, (low amplitude) high frequency tectonic movement, eustatic sea level and lake level fluctuations, and local faulting. The question of whether there are other mechanisms that could potentially produce the same geomorphic and stratigraphic signatures as these external factors is difficult to address from field data alone. Because of the temporal and spatial scales that geological processes evolve in and because of the complexity of field-scale systems, experimental work is one way, and in some cases the only way to resolve question like these.


Patterns of erosion and deposition: Some observations from a high temporal and spatial resolution movie of the experimental transport surface in plan view and associated (laser) topographic measurements (Figures 2 and 3)

1) While the fluvial system is on average incisional throughout most of the sea level fall and is on average depositional throughout most of the sea level rise, there is a continuous interplay of erosion and deposition during the entire cycle. Incisional events are also aggradational and aggradational evens are also incisional.

1) The shape of an incised valley is continuously redefined during sea level fall and rise.

3) Due to this dynamic reshaping, what is preserved in stratigraphy may resemble a valley in shape, but its geomorphic form likely never existed in the fluvial landscape. The preserved stratigraphic valley is wider and has gentler side slopes than any of the topographic valleys that existed before it.

3) Why did the topographic incised valley generally shallow downstream, while in the stratigraphic record it generally deepens downstream? Post-depositional erosion due to subsequent sea-level cycles preferentially eroded/ reworked the upstream sections of the stratigraphic valley deposit.

« The degradation of glacial deposits in the McMurdo Dry Valleys, Antarctica       Using technology as an aid to the geomorphologist »