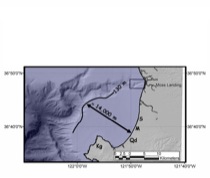 Hide
Figure 1: Southern Monterey Bay is the shoreline south of Moss Landing and north of the granodiorite (Kg) of the Monterey Peninsula. The 130 m isobath is the approximate location of the shoreline 18,000 years ago. The long term coastal retreat rate is 14,000 m / 18,000 years, or 0.8 m/yr. Qd is Quaternary dune deposits. M is Marina, CA. S is a sand mine. Details 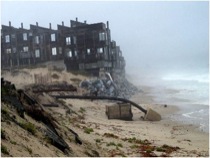 Hide
Figure 2: The Harbor House Condominiums in Monterey, California was permitted to install an emergency seawall on a public beach to protect private property. Historic aerial photographs show that the shoreline fronting the Harbor House Condominiums has retreated over 20 m in the past 28 years (0.7 m/yr), in keeping with the overall long-term average coastal retreat rate for the region (Fig. 1). Rapid coastal retreat is evinced by the “hanging” stormwater outfalls in the foreground. During high surf conditions the once wide beach is now impassable in front of the sea wall. Details

Hide
Figure 3: Ten-meter tall storm swells combined with a high tide to attack the weak sea cliff along Marina, California (Fig. 1) on January 5, 2007. The bedrock at the base of the cliff is being directly attacked by the wave run-up. This occurred because the loose debris apron of sand usually armoring the base of the cliff was previously removed by strong currents. The seaward-directed water wave was generated by the landslide toe crossing the beach. The landslide was triggered by erosion at the base of the slope. Most of the long-term average coastal retreat along this coastline occurs during a few large storms that occur each decade. After this storm, the beach was much higher and wider than before the storm. Details 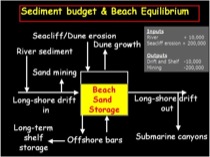 Hide
Figure 5: Conceptual systems diagram depicts the inputs and outputs of sand stored on the beach for a typical 100 m long stretch of beach in southern Monterey Bay. The most important transfer rates (yd^3/yr) were estimated by Thornton et al. (2006). The coastline is rip-dominated, so much of the beach sand is permanently lost to the continental shelf. Details

Introduction
Global sea level stood between 100 m and 130 m lower than today's sea level 18,000 years ago at the peak of the latest ice age. Since that time, melting ice and thermally expanding oceans have gradually drowned the continental margins of the world. Vertical sea level rise translates to horizontal inland migration of the shoreline, or "coastal retreat." Locally complicating coastal retreat rates are the local rock types and attendant rates of coastal erosion, the movement of coastal sediment, and the pre-existing coastal topography that either invites or resists inundation. "Coastal geomorphology" analyzes this dynamic system, and can inform coastal management policies and plans. This paper describes the coastal erosion processes of southern Monterey Bay, California in the context of coastal management (Fig. 1).

Do We Need Coastal Management Policies and Plans?
Why not let coastlines retreat under the natural process of sea level rise and coastal erosion? While unmanaged retreat is one end-member of a whole suite of options available to regional planners and cities, it is rarely the chosen option in California where countless poor land-use decisions have placed homes, hotels, highways, sewer lines, and businesses directly in harm's way (Griggs et al., 2005). Rather, the default response has been local coastal armoring with a seawall. Armoring is typically the result of "emergency" conditions that exist when individual structures or roads are under imminent threat of destruction, and when little time remains for rational evaluation of other options (Fig. 2). The installation of a great number of local, emergency seawalls has the cumulative effect that seawalls gradually become the de-facto regional "solution." While armoring has its place, it has been historically misused as a local band-aid on a regionally hemorrhaging wound. The typical result of seawall installation is the slowing of coastal retreat, but with an attendant loss of beach width in front of the structure (Hall and Pilkey, 1991; Kraus and McDougal, 1996). Cities need preemptive planning efforts that lead to longer-term regional coastal management plans that include a spectrum of tools.

Coastal Retreat--How Is It Measured and How Bad Is It?
Coastal retreat rates vary greatly through space and time. A quick analysis of southern Monterey Bay shows that the average long-term retreat rate is about 0.8 m/yr where the seacliffs are poorly-lithified Quaternary sand dunes (Fig. 1). The retreat rate is far less where the coastline comprises granodiorite (Fig. 1). Short term rates for the past few decades can be deduced by tracing the seacliff in a sequence of georeferenced historic aerial photos spanning 30 years. These modern average rates vary monotonically from close to 0 m/yr near the southern end of the bay to a stunning maximum of 1.5 m/yr near Marina (Fig. 1). More precise measurements using recent airborne LiDAR support the rates derived from aerial photos, and a pair of LiDAR flights provide the data required to estimate the volume of sand produced from the eroding coastline (Thornton, et al., 2006). In addition to erosion rates and sand volumes, the data and direct observation show that decadal-scale winter storm waves combined with high tides account for most of the long-term average rates of coastal retreat (Fig. 3; Cambers, 1976; Griggs et al., 2005; Thornton, 2006).

Systems Approach to Coastal Processes and the Sand Budget
Coastal processes and sand budgets can be developed at a variety of scales. We will take a systems approach to analyze a typical 100 m long section of sea cliff near CSU Monterey Bay (Fig. 4). For this work, a "system" is a conceptual model of reality where transfer rates and storage of sand are identified and quantified. The goal is to develop a sand budget, just like a bank account with inputs and outputs. We have identified the major storage areas and significant inputs and outputs of sand to this section of beach (Fig. 5). The "sand bank" in our example is the beach width (e.g., Hall and Pilkey, 1991), which is a reasonable proxy for volume, and is easier to measure on aerial photographs. Historical aerial photos indicate that the beach width is in approximate steady-state equilibrium (constant average width) over a decadal time-frame.

Thornton et al. (2006) was able to quantify parts of the sediment budget. Surprisingly, seacliff erosion is by far the dominant source of beach sand. If we assume that littoral inputs and outputs are reasonably balanced along our short section of coast, then the steady-state condition leaves us with a startling conclusion. The great volume of beach sand sourced from seacliff erosion resides in the beach for a while, providing the constant average width, but is ultimately carried away by rip currents to very long-term storage on the continental shelf. In other words, Monterey's beautiful wide beaches exist because of coastal erosion; this anti-intuitive result is critical for regional management decisions.

Applications--Do You Want Wide Beaches or Stable Coastlines?
Each environmental management decision is a value judgment, hopefully made in the context of science. Our analysis indicates that coastal armoring along southern Monterey bay will result in narrower or missing beaches by shutting off the chief sand supply. Now the science-based question can be asked of city planners or concerned citizens, "Do you want seawalls or wide beaches?" If "wide beaches" is the preferred long-term goal, a spectrum of other coastal management options can be considered, including synthetic surfing reefs, emergent breakwaters, beach nourishment, and a variety of "softer" actions that honor the eventual loss of ground to the sea.

The sand mine listed in the systems diagram (Fig. 5) removes 200,000 yds3yr-1 of sand from the littoral zone up-current from the seacliffs of southern Monterey bay. Compare this volume with the volume derived from seacliff erosion (Fig. 5)! So, one clear goal for regional coastal management is to work with the miners to rethink their mining strategy. Perhaps mining cessation would increase the littoral drift input to the system, providing a steady-state beach condition that demands less seacliff erosion (Thornton, 2006).

Summary
Sea level is rising, and coastlines are retreating. Imminent economic losses in California and around the world are driving a need for local geomorphologic studies that can help plan thoughtful regional responses to coastal retreat.