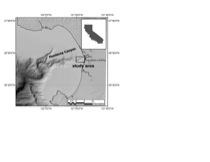 Hide
Figure 1: Monterey Canyon has a cross section comparable in scale to the Grand Canyon. The box shows the location of Figures 2 and 5. Details 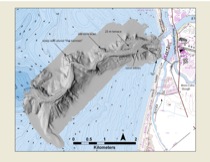 Hide
Figure 2: Digital shaded relief map of Monterey Canyon shows details of canyon morphology including sand waves, Quaternary landslide scars, and fill terraces. The deepest part of the canyon in this scene is 270 m. The top width of the canyon is approximately 1000 m here. The 25 m tall terrace is visible in Fig. 3. Details 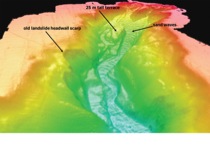 Hide
Figure 3: Oblique digital view shows giant sand waves covering the floor of the canyon, landslide scars, and a 25 m tall fill terrace that indicating that the canyon is in an erosional phase. The down-canyon end of the terrace is at a depth of approximately 130 m, the 18,000 year shoreline. The warmer colors are shallow and the cool colors are deeper. The shallowest depth in the image is approximately 10 m, and the deepest point in this image is 160 m below sea level. Details 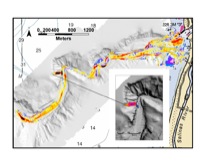 Hide
Figure 4: Digital bathymetric data sets from two surveys were subtracted from one another and colored to show the elevation change. Warm colors show erosion and cool colors show deposition. Note the landslide highlighted in the inset. Scours at the outsides of meander bends show greater than 10 m of elevation loss. Details

Hide
Figure 5: Monterey Canyon is a peri-coastal canyon. It dwarfs the digitized large buildings along the coast in this northeasterly perspective. The twin towers are the steam vents for California's largest gas-fired electrical power plant. The canyon mouth captures over 200,000 cubic meters of sand from the coastline. The lip of the canyon advances landard and retreats seaward 10's of meters subannually. It occassionally devours the end of the North Jetty of Moss Landing Harbor, but has no appetite for the power plant at this time. Details

Introduction
While traditional geomorphic studies focus on the geologic processes and products that shape our terrestrial topography, there are equally exciting opportunities to explore the other 71% of the planet lying below sea level. The study of seafloor topography (bathymetry) was originally used to aid navigation by mapping shifting sand shoals and treacherous reefs. In the 1950's, sonar (sound wave) technology revealed Earth's mid-oceanic ridges and deep-sea trenches--the global-scale geomorphic features that eventually led to plate tectonic theory and its many refinements (Heezen et al., 1959; Severinghaus and McDonald, 1988). Recent advances in both sonar resolution and GPS positioning now allow us to study seafloor morphology in ever-sharper detail (e.g., McAdoo et al., 2000). Bathymetric data are commonly displayed as digital shaded relief views depicting seafloor morphology as clearly as if the oceans had been drained away. This paper describes modern studies of Monterey Canyon, which cleaves the central California Coast (Figs. 1 and 2).

Giant Sand Waves in Monterey Canyon
The head of Monterey Canyon almost reaches the beach at Moss Landing Harbor, so it captures all the beach sand moving either north or south toward Moss Landing Harbor. According to rough estimates over 200,000 m3 of sand enters the canyon each year (e.g., Paull et al., 2005), so there is plenty of sediment available to generate interesting geomorphic features. Our first high-resolution bathymetric survey of the canyon (2002) revealed that this huge volume of sand generates giant sand waves as it moves down the first 4 km of the canyon (Smith et al., 2005). The waves range from 1 m to 3 m tall and have a wave-length of about 50 m (Fig. 3). In each of the semi-annual surveys since 2002, the sand wave crests were in new positions, so we postulated that the sand wave field somehow records the processes of down-canyon sand transport.

Sand Wave Interpretations: From Bad to Worse
The sand wave shapes are asymmetrical, with a steep face on the down-canyon side and a gentler slope on the up-canyon side. Sand waves in modern rivers and desert dunes have similar asymmetry, suggesting that these submarine sand waves probably migrate down canyon maintained by unidirectional, down-canyon water currents (Smith et al., 2005; Xu et al., 2007). If all we had was one survey, we might not look beyond that explanation, but there are paradoxes when we look closer. There are three problems with the simplistic "uniformitarian" interpretation. First, migrating sand waves leave deposits bearing a fingerprint "cross-bedding" pattern, but shallow cores taken from the sand waves in Monterey Canyon do not show the pattern! Second, Smith et al. (2007) compared sand wave crests from two surveys taken 32 days apart. If the crest correlations are correct, at least some of the sand wave crests migrate up-canyon as antidunes! Third, when we compare surveys taken months apart, there is evidence of strong currents, but current meters deployed in the canyon in this area have not detected the "required" currents! The evidence for strong currents include 8 m to 10 m deep scour holes forced at the outsides of tight turns in the canyon bottom (Fig. 4), erosion of about 100,000 m3 of sand from the channel walls and floor, and net transport of at least 300,000 m3 of sand each year through a 10 m wide slot canyon ("narrows" in Fig. 2) without net aggradation! Other workers believe that the sand waves have a structural rather than sedimentological origin. So far no satisfactory hypotheses about the sand waves have been published.

Landslides and Tsunamis?
One common application of geomorphic theory is the reduction of landslide risk through mapping and monitoring potentially unstable hill slopes (e.g., Cannon et al., 2009). While submarine landslides will never bury a poorly planned housing subdivision, they can generate deadly tsunamis by pulling a deep trough into the sea surface as they fail. Precise surveys of canyon slopes can reveal the locations and dimensions of past submarine slope failures, and prehistoric tsunamis can be modeled from the slide geomorphology of ancient slides and a few assumptions (e.g., McAdoo and Watts, 2004). We caught a modern canyon wall landslide "in action" by comparing the seafloor elevations from March 2003 and September 2003 surveys (Fig. 4). Sometime in that narrow time window 70,000 m3 of canyon wall slid to the canyon floor. While this slide was too small to generate a dangerous tsunami, the fact that a significant slope failure occurred during the brief time since our monitoring began indicates that canyon wall failures may be more common than previously thought. Slide probabilities might eventually be developed if enough small slides are captured and analyzed.

The Canyon that Swallowed Moss Landing?
Given the dynamic nature of Monterey Canyon, it is reasonable to wonder if the position of the canyon head is stable through time (Fig. 5). If the head is filling in, the canyon lip would gradually migrate seaward. If the head were eroding headward like a giant gully, Moss Landing Harbor, a great number of buildings, and California's largest gas-fired electrical power plant might be at risk of falling into the canyon! The canyon lip is defined as the break in slope between relatively horizontal continental shelf and the steep canyon walls. Tracing the lip position through time reveals that the lip moves as much as 50 m inland and back to sea on a sub-annual basis, but it is apparently in steady-state equilibrium between sediment buildup at the lip, and slope failure sending the sediment down canyon, so Moss Landing is safe for now. As these analyses are based on only a few years of data, it is unclear if the apparent equilibrium is just an illusion based upon too few years of record.

« The Occurrence of Small-Scale Debris Fans in Sandstone Landscapes of the Central Appalachians       Coastal Geomorphology and Policy Applications along Southern Monterey Bay, California »