Floodouts, drainage breakdown and wetland formation in a losing river in Eastern Australia 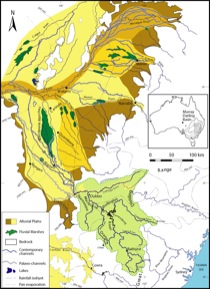 Hide
Figure 1 The Macquarie River catchment and the location of the Macquarie Marshes on the Upper Darling Riverine Plain of southeastern Australia. Similar floodout style marshes on other river systems on the plain are indicated. Details 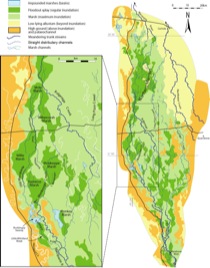 Hide
Figure 2 Geomorphic map of the Macquarie Marshes and the Southern Macquarie Marshes (inset). Mapping is based on aerial photograph interpretation and shading shows the limit of mapping. Figure 7 transect indicated by C-C’. Details 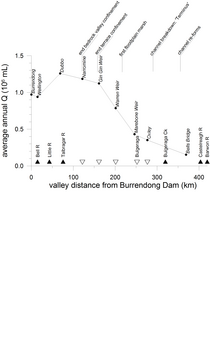 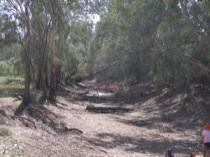 Hide
Figure 5: Buckiinguy Break (distributary channel). A small marsh channel through the upper bank is evident on the far (right) bank. Flow is from right to left. Details 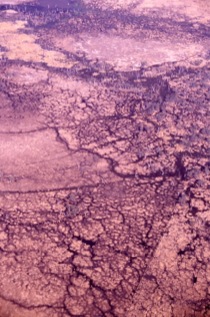 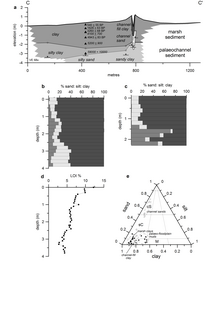 The Macquarie River of eastern Australia is an inland draining perennial system whose lower reaches flow across a large, low gradient alluvial fan-plain without tributary input (Figure 1). Failure of the Macquarie to sustain its channel form leads to channel breakdown and floodout and the formation of extensive near-perennial wetlands – the Macquarie Marshes.

The Macquarie Marshes are an important Ramsar-listed waterbird habitat. The increasing abstraction of water for agriculture, as well as periodic drought and future climate change predictions all threaten the successful breeding of the birds. In addition, the inherently dynamic nature of the fluvial system (with channel avulsion and marsh abandonment) poses management challenges where conservation reserves are restricted within a broader alluvial landscape largely utilised for agriculture.

Channel breakdown (the loss of ability to maintain a channelized course) and the resulting floodout (distribution of water and sediment across the unchannelised floodplain) is a common phenomenon of losing streams (which decrease in discharge in a downstream direction) in arid and semi-arid environments.

The Macquarie is a losing stream in its lower reaches: the upper catchment of 26 000 km2 enters a broad alluvial fan-plain near Narromine where it has a maximum annual average discharge of 1.2 106 ML yr-1 (Figure 3). On the plain there are no tributary inputs but substantial losses to the floodplain and distributary channels during floods, evaporation, groundwater recharge (<2% of total discharge at Narromine) and increasingly to abstraction for irrigated agriculture. At the point of first floodplain marsh formation the average annual discharge is only 0.4 106 ML yr-1.

The location of the channel breakdown region is determined by the channel hydrology: the threshold of stream power below which the channels cannot be easily eroded and in-channel sedimentation occurs. Sediment load is also critical, determining bank strength, tendency for sediment to deposit in the channel and to build up the banks. However, at the local scale, the complete breakdown into marshes is influenced by the degree of topographic confinement produced by surrounding alluvial ridges of palaeochannels (Figure 2): whether overbank flows can spread widely on the floodplain and whether those flows return to the channel or are dispersed within the marshes to infiltrate and evaporate.

Stages of channel change and breakdown

There are two stages in the channel breakdown: development from a single meandering channel to a distributary pattern of straight channels and then further reduction in channel size and continuity, increasing overbank flow even under low flow conditions and the formation of permanent and semi-permanent wetlands on the extensive floodplains (Figure 2).

Several distinctive channel types are identified on the lower Macquarie, each playing a different role in the process of channel and floodplain evolution. At the upstream limit of floodplain marsh formation the trunk stream (Figure 4) reaches maximum sinuosity and minimum width/depth ratio and changes character from a dominantly laterally-adjusting channel to one with both vertical and lateral accretion features and avulsion. Some of the past avulsions have lead to relocation of the channel (abandonment of a reach of old channel). Some avulsions have created an anastomosing river (simultaneous operation of old and new channels and rejoining) while some have created a distributary pattern (old and new operate simultaneously but do not rejoin).

Some avulsions are partial or incomplete, creating 'breakaways' (local term) - long-lived small distributary channels formed in the mid or upper bank of the trunk stream. All of these new 'distributary' channels are relatively straight and become shallower and smaller downstream. They are inherently unstable: their low stream power and more-or-less perennial flows encourage aquatic and riparian vegetation which further slows flow, enhances in-channel deposition, channel contraction and overbank flow leading to the formation of top-of-bank marsh channels to distribute water onto the floodplain (Figure 5).

Marsh channels have very small capacity, usually have indistinct bed and banks and are fully vegetated. They may terminate or merge with gilgai depressions to form a reticulate network of marsh channels covering the floodplain (Figure 6). Overall, this sequence is one of channel breakdown and 'floodout' (loss of channelized flow).

New distributary channels are initiated by avulsion and incision into the floodplain surface and then gradually aggrade until a new avulsion results in abandonment, typically over a timescale of approximately 100 years. Avulsion and channel breakdown at the local scale are driven by the characteristic nature of the dense in-channel reed vegetation which chokes the streams and leads to in-channel aggradation, reduced fluvial efficiency and frequent overbank flows that ultimately lead to the development of new channels.

Floodplain development occurs as a series of spatially discrete sediment lobes, each of which are deposited in marshes immediately downstream of the channel breakdown. The wetlands trap almost all of the sediment delivered to them. Simultaneously, upstream of the breakdown sediment from overbank flows is trapped by dense vegetation on the banks and leads to the build-up of low levees (10-50 cm). Lobe accretion is terminated by channel avulsion through the low levees which line the channels.

The lower Macquarie is an almost entirely suspended load transporting river with up to 80-90% clay content and minor silt and fine sand. Despite this, low suspended sediment concentrations result in slow rates of floodplain accretion (Figure 7). Because of the semi-arid climate and low sedimentation rates the marsh sediment is nearly all clastic with only around 5% organic matter (LOI).