The continental dunefield of Australia 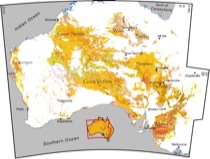 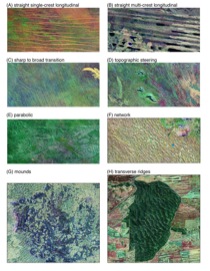 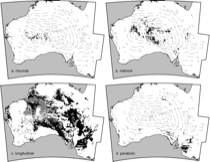 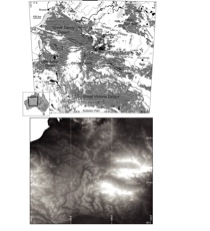 Dunefields cover a large portion of the Australian continent in areas with favourable topography, climate and sand supply. The main areas of dunes lie in a diagonal band across the continent from the Mallee dunefield in the southeast to the Great Sandy Desert in the northwest (Fig. 1). These two dunefields with the Strzelecki Desert, Simpson Desert and Great Victoria Desert dunefields constitute the largest distinct sand seas. In addition there are many smaller dunefields surrounding these sand seas and isolated dunes over an even broader area.

The major dunefields lie within the arid and semi-arid climate zones, although some smaller dunefields occur in areas which are presently sub-humid or humid and densely vegetated. The broadly concentric pattern of rainfall distribution over the Australian continent is the product of summer monsoonal rainfall over the tropical north decreasing towards the south and winter westerly frontal rainfall in the south decreasing to the north. Australia as a whole has low rainfall and extensive arid areas but does not presently experience hyper-aridity. The driest part of the continent, at the northern end of Lake Eyre, still averages over 100 mm of rain each year and is largely vegetated to a degree which is sufficient to stabilise dune crests (Hesse & Simpson 2006).

The anticlockwise whorl formed by the longitudinal dune orientations has long been recognised and its general similarity with the anticlockwise winds of the sub-tropical high pressure system noted. Nevertheless, dune orientation is expected to reflect the long-term resultant sand drift direction (RDD) at any point and the subtropical ridge has a pronounced seasonal cycle of movement north and south over the southern half of the continent such that the dunefield does not represent the synoptic wind flow of any single period or season. At the centre of the whorl at approximately 26° S there is a distinct double centre to the pattern of dunes; one centred over Lake Carnegie (123° E 26° S) and the other NE of Mt Connor (132.5° E 25.5° S).

Comparison of the dune map with the modern annual resultant drift direction determined by Kalma et al. (1988) shows that there are regions in which there is close agreement and areas of divergence and even opposed wind and dune directions. There is reasonably close agreement (within 15°) between RDD and dune orientation in large parts of the eastern and northeastern dunefields. However, dunes over most of the Great Victoria, Eyre, southwestern Mallee, Great Sandy and Gascoyne are oblique (up to 75° divergent) and there are areas of the Gascoyne, northern Great Sandy and along the axis of the dune whorl in central Australia where dunes are opposed or even reversed with respect to the modern RDD.

Within the dunefield there are distinct distributions of the main types of dunes. Fig. 2a-2h shows Landsat images of major dune morphological types. Transverse dunes (Fig 2h) (excluding playa shoreline features) are rare in the Australian dunefield. This is likely because the combination of unimodal wind climate and high sand supply which favour transverse dunes is rare in the Australian deserts. Single-crested longitudinal dunes (Fig 2a) are the most common type in Australia and dominate in all dunefields except the Great Sandy where multi-crested longitudinal dunes dominate (Fig 3c, 2b). Longitudinal dunes are favoured by seasonally bi-directional winds and low sand supply, characteristic of Australia. Around and between the dual centres of the whorl, network dunes (Fig 2f) are common where dunes change orientation over relatively short distances (Fig 3b). The network dunes are short, linked linear segments varying from no detectable preferred orientation to dunes with a dominant set of longitudinal dunes but with connecting segments of different orientations. At the centre of the whorl, particularly in the west, there are areas of isolated mounds (Fig 3a, 2g): mostly small dunes separated by sandless plains but often with a regular arrangement. These are in some ways similar to star dunes, reflecting a highly variable wind regime, but are formed in areas of very low sand availability. Within the longitudinal dunefields there are areas of parabolic dunes (Fig 3d, 2e), especially towards the margins of the dunefield in areas where longitudinal streamlines are parallel and show little curvature, in the Mallee, Eyre and Wiso dunefields and in patches of the extreme southwest Great Victoria dunefield and through the southwest. In general, the distribution of dunes at this broad scale conforms with expectations of dune morphological response to wind direction (Wasson & Hyde 1983; Werner 1995).

Topography has a strong influence on the location of dunefields and dunes at all scales: it limits the supply of sand and erodible sediment in low-lying areas, the erosivity of runoff and the topographically-induced acceleration or deceleration of wind. At the broadest continental scale topography has an immediately obvious relationship with the supply of erodible sand. There are rare instances of small dunefields in upland areas associated with localised sand sources but most dunefields occur in valleys, piedmonts, coastal plains or lowland basins from sedimentary accumulations.

In the eastern half of the continent there is a clear topographic distinction between erosional uplands and sedimentary basins (Fig. 4). With a few exceptions dunefields occur in the lowland basins and are absent from the Great Dividing Range of the east coast and the extensive low hills of the inland. The Mallee Dunefield occupies the western portion of the Cenozoic Murray Basin. The Cenozoic Lake Eyre Basin underlies both the Simpson and Strzelecki dunefields which are separated by the low structural ridge of the Gason Dome on which Sturt's Stony Desert is found (Fig 4).

In the western half of the continent, the older cratonic crust has less dramatic relief and lacks Neogene basins. The extensive Great Victoria and Great Sandy dunefields occur on landscapes of subtle but distinct ridge and valley topography (Fig. 5). While the topography is often low enough that sand dunes can climb over and cover the ridges between valleys, it is clear from the topographic dependency that the valleys are the source of the sediment and that aeolian processes have not only re-shaped the valley floors but also blown sand out to cover much of the ridges between (Fig 5). In this respect they are very different from the eastern dunefields or even most dunefields of Africa or Asia of comparable extent which occupy geological and topographic basins (Breed & Grow 1979).

Large low-relief areas of the arid zone are dune-free and these are related to low sand supply because of substrate or catchment lithology or sediment starvation. Examples are found in the Nullarbor Plain (limestone), Georgina Basin (shale/mudstone), Carpentaria basin (clay soils and hardpans) and parts of the Darling Riverine Plain and Murray-Murrumbidgee Riverine Plain (clay soils). The Yilgarn Block of southwestern Australia appears to have been a poor source of sand for dune formation in its subdued landscape or surrounding areas during the Cenozoic, possibly due to prolonged, deep weathering and duricrust formation. The generally low sand supply has contributed to the characteristic dune morphologies: longitudinal, network and mound.

Climate change and the evolution of the dunefields

The topography and extensive palaeodrainage network of the western half of the continent date to the late Mesozoic to Early Cenozoic. It is thought that this relict landscape was the product of advancing aridity through the Neogene leading to loss of effective fluvial transport. Subsequent evolution towards an arid landscape saw the development of saline groundwater windows, playas and aeolian landforms by at least 1 million years ago (Fujioka et al. 2009). Because of this trend to aridity and reduction of sediment supply, most of the dunefields today receive little or no new supplies of sand from fluvial sources but rework old coastal, fluvial and lacustrine sediments from relict shorelines, terrestrial basin deposits, piedmonts and valley floors.

The repeated expansion of arid conditions in glacial stages of the Quaternary glacial cycles has left dunefields extending from the most arid parts of the continent into the semi-arid zone and isolated patches in presently humid areas. Growing geochronological evidence points to dune formation beginning in the mid-Pleistocene and accelerating as the climate has become increasingly arid in subsequent glacial cycles. However, the dunes appear to have suffered little modification of orientation after their initial formation, possibly due to stabilisation by pedogenesis and vegetation, and their orientation preserves the alignment due to sand drift direction at that time. There are substantial areas of large divergence between sand dune orientations and modern resultant sand drift direction which point to past altered circulation patterns: areas of onshore wind flow in the Great Sandy, Gascoyne and Eyre dunefields, and areas along the central axis of the dune whorl at 26° S. Some combination of latitudinal shift in response to hemispheric temperature gradients, altered land-sea temperature contrast and regional variations in proximity to the coastline as sea-level fell may explain this regional pattern of variation. There is no simple, continent-wide displacement of dune orientations and therefore simple latitudinal shift of circulation patterns, as has been frequently postulated, is not an adequate explanation of the observed patterns.

The trend towards aridity experienced since the Miocene and modulated by the Milankovich cycles in the Quaternary has seen progressive landscape change, spread of aeolian landforms, development of playa lakes and loss of fluvial drainage networks. The dunefield exhibits many features reflective of the evolution of the climate as well as related changes in sediment supply.