Why is there a sandwave and why is it not there all the time? 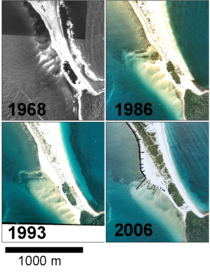 Hide
Figure 2: Georectified aerial photos showing the evolution of the sandwave between 1968 and 2006. The dots on the 2006 photo represent measurements taken with RTK-GNSS in April 2008 (modified from Vila-Concejo et al., 2009). Details 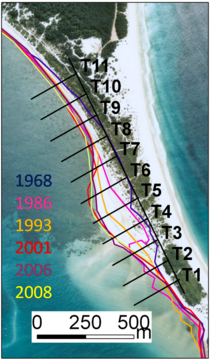 Hide
Figure 3: Decadal evolution of the sandwave between 1968 and 2008 showing an aerial photo from 2006 with the other shorelines superimposed; it also shows the location of the across-shore profiles used to assess the sandwave evolution. Details 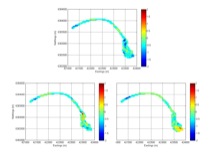 Hide
Figure 4: Overall accretion/erosion occurring in the northern shoreline of Port Stephens estuary during low-energy high-frequency storms (upper panel, March to May 2007) and during high-energy low-frequency storms (lower panel, May to June 2007 and June to July 2007). Details

It is widely known that beaches erode because of the effect of storms. However, this is not always the case; this vignette presents an area that seems to grow the most when affected by severe storms. For this vignette, we are using the term sandwave to refer to a shoreline-attached sandwave which is a sandy protrusion of the shoreline as shown in Figure 1. We are showing the decadal and monthly evolution of a shoreline-attached sandwave that appears in the study area, migrates and disappears again, and that also undergoes accumulation under severe storms.

Port Stephens (NSW, Australia) is a ria-like drowned river valley estuary that is located 230 km north of Sydney (NSW, Australia). Its northern shoreline (Figure 1) is a highly dynamic environment that includes Jimmy's beach and Winda Woppa peninsula, both of them form a sand spit that deflects the mouth of the Myall River and forms its southern boundary [for more information see the other vignette by the same author]. Further eastwards there is a shoreline-attached sandwave, a dynamic morphologic feature that modifies the morphodynamics of the surrounding beach. Features of this scale have been described in several coastal settings and have been given different names, the presence of sandwaves in estuarine environments has been described in the literature but the mechanisms related to their formation and evolution remain mostly unknown.

The evolution of the sandwave during past decades can be assessed using georectified aerial photos in a Geographic Information Systems (GIS). Figure 2 shows aerial photos of the area where the sandwave (if present) is located in 1968, 1986, 1993 and 2006; measurements of the sandwave taken in April 2008 using a Real Time Kinematic Global Navigation Satellite System (RTK-GNSS) are also represented on the 2006 photo. It can be seen how the sandwave was absent in 1968 and how sediment seem to be transported to the NW in 1986; a sandwave is present in 1993, 2006 and 2008.

Before going any further we should introduce some of the forcing mechanisms that control the geomorphologic evolution of the area:
- Port Stephens is a tide-dominated estuary which is located in a wave dominated coast. It has an entrance that is 1.24 km wide and a deep well defined channel (tide-dominated). Due to its location on a wave-dominated coast, and the fact that the entrance is quite wide, it is possible for waves to propagate inside the estuary.
- The wave climate is moderate with mean significant wave heights (Hs) of 1.5 m and 8 s wave period (T). Waves from the NE dominate during summer and E-SE waves are prevalent for the rest of the year; although SE storms may occur at any time of the year, they are more frequent between April and September.
- Tides in the area are semidiurnal (two high-low tidal cycles per day) and microtidal (tidal range is less than 2 m) with mean tidal ranges of 1.6 m and 1.3 m for spring and neap tides respectively.

To better understand the morphodynamics of the sandwave, we have been measuring it since March 2007 using standard surveying techniques such as total station and RTK-GNSS. The period was characterised by a cluster of storms occurring during June and July, in the Austral winter of 2007 (significant wave heights, Hs, were from 3.5 m to greater than 6 m). During the rest of the study period there were several low-energy high frequency storms (Hs between 3 and 3.5 m). The largest erosion of the sandwave occurred during these low-energy high frequency storms. On the other hand, during the severe storms of June-July 2007, the sandwave underwent an overall sediment accumulation (Figure 4).

The analyses of the decadal evolution agree with previous studies by Cholinski (2004) and suggest that the sandwave was first recorded in the 1980s and that there was a period up until the mid 1990s where westward sediment transport caused sandwave formation and migration towards the inner parts of the estuary. Since then, the sandwave migration slowed down, remaining relatively stable with some further migration between 2006 and 2008. Short term studies suggest that sandwave accretion episodes occur under severe SE storms.

There are still too many unknowns with respect to the evolution and behaviour of the sandwave. Several sandwaves were identified since 1980s but none between 1968 and 1981. On the other hand, cartography of Port Stephens, drawn during the visit of the Beagle in 1835-36, clearly shows a protrusion in the location where the sandwave exists at present; this only adds more questions to the puzzle: why is there a sandwave and why is it not there all the time?

« Reconstructing Late Quaternary paleoenvironments in the eastern Bolivian lowlands – approaches and results.       Where did the river mouth go? »