Jan-Hendrik May
School of Earth and Environmental Sciences, University of Wollongong

Hide
Fig. 1: Overview over the geographic setting of the eastern Bolivian lowlands (left) and their mesoscale landforms (right; modified from May 2006) Details

Fig. 2: Landsat caption of the piedmont and its relict landforms in eastern Bolivia (modified from May 2006) Details

Hide
Fig. 3: Example of an exposure of Late Quaternary piedmont stratigraphy at Charagua exhibiting a major and several minor paleosols formed in mainly fluvial sediments (modified from May et al. 2008a) Details 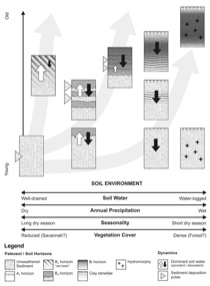 The reconstruction of present and past environmental dynamics is a key issue in the ongoing discussion of global change. In South America for a long time most paleoenvironmental and paleoclimate studies came from the Andean highlands, whereas little research was conducted in the extensive lowlands. Eastern Bolivia is situated at the transition between the humid climate of Amazonia to the north, and the semi-arid Gran Chaco to the southeast. Therefore, past climatic changes and their corresponding environmental impacts should be sensitively recorded in the landscape and its sedimentary, pedological and geomorphological archives.

To reconstruct and interpret landscape and climate history, the choice of paleoenvironmental archive is crucial. Therefore, thorough documentation of landforms and understanding of their genetic processes preceded more detailed field based investigations. A multitude of remote sensing data was used in order to distinguish between the different mesoscale landforms in the lowlands (Fig. 1; May 2006). Most of the Andean foreland is characterized by fluvial megafans, which are the result of Neogene uplift and propagation of the Subandean fold-and-thrust belt (Horton and DeCelles 2001). Much smaller, younger alluvial fans build up the Andean piedmont and constitute the topographic transition between the Andes and megafans. Given their small catchment size, these fans should record the regional hydrological and sedimentary history, and are thus considered appropriate archives for paleoenvironmental reconstruction.

Today, the piedmont in eastern Bolivia is mainly covered by forest, but interpretation of remote sensing imagery reveals the presence of relic landforms such as paleochannels and source-bordering parabolic paleodunes as visual evidence for past variability in fluvial discharge and sediment supplies in relation to paleoenvironmental changes (Fig. 2). Lateral migration of the base-level has frequently eroded the distal part of the piedmont (Fig. 2) or caused incision of piedmont streams. This leads to exposure of the Late Quaternary piedmont stratigraphy and extensive paleosol-sediment-sequences (e.g. Fig. 3), which were investigated at three study areas (Fig. 1) and reflect local changes between active sedimentation, erosion and pedogenesis. Interpretation of these sequences was based on the concept of landscape activity and stability (Rohdenburg 1970). Well-developed paleosols of regional significance (marker horizons) are assumed to have formed in generally stable landscapes under dense vegetation and wet conditions, whereas extensive deposition, transport and/or erosion of sediment indicate dry conditions.

At Charagua (~20°S, Fig. 1) streams have incised into their sediments, exposing two different units of fluvial sediments, which are divided by an intercalated and well-developed paleosol (Fig. 3; May et al. 2008a). Here, fluvial sands are attributed to an overall aggrading and laterally variable fluvial system under relatively dry conditions during the Mid-Holocene (~9-4 cal ka BP, Unit I). At ~4 cal ka BP, wetter climate conditions caused densification of the vegetation cover, extensive pedogenesis and overall landscape stability (Unit II). Renewed sedimentation reflects a change within the fluvial system towards higher sediment supplies and landscape activity sometime before ~1 cal ka BP, with coarsest sediments and rapid incision during the last centuries (Unit III).

The most extensive paleosol-sediment-sequences are exposed at Cabezas dating back to >22 cal ka BP (19°S, Fig. 1). They exhibit a large sedimentary variability which forms the base for reconstruction of paleoenvironments (Fig. 4; May et al. 2008b). Deposition of coarse gravel and extensive sands in braided and avulsive fluvial systems is regarded as evidence for generally drier environmental conditions during the last glacial cycle and the Mid-Holocene, respectively. On the contrary, paleosol formation and organic-rich wetland deposits characterize substantially wetter climates during the Late Glacial and the Pleistocene-Holocene transition. Since ~4 cal ka BP, short intervals of minor deposition of sands have interrupted pedogenesis and may be interpreted to reflect more recent hydrological changes during the last centuries.

At Santa Cruz (~18°S, Fig. 1) a model for regional pedogenesis (Fig. 5) shows that soil formation covered a wide range of processes during the Late Quaternary such as reddening and oxidation under dominantly dry conditions during the LGM, shallow clay neoformation under very seasonal conditions during the Mid-Holocene, and intense clay illuviation under Late Glacial and modern wet conditions. Here, the high geomorphological and paleopedological complexity complicates the establishment of a stratigraphical framework based on marker horizons (May and Veit 2009). Detailed paleopedological analysis, however, has shown a strong link between paleoenvironmental conditions (climate, vegetation etc.), soil environment (soil water flow, micro-environment) and the type of paleosol horizon.

In conclusion, the investigation of piedmont stratigraphy in eastern Bolivia has shown a variety of information stored in sedimentary and paleopedological archives. A marked north-south decrease in paleopedological complexity seems to reflect the climatic gradient characteristic for the outer tropics eastern Bolivia. In this setting, the concept of landscape activity and stability has proved particularly useful in semi-arid to subhumid settings where the correlation of well-developed paleosols has allowed the detection of climate-driven environmental changes in vegetation cover, sediment supply and flow regime. Towards wetter tropical environments, however, sufficient moisture seems to be provided to maintain pedogenic processes even through times of significantly increased aridity and overall landscape activity.

« Regional trends in desert dune morphology and orientation: Examples from the Australian deserts       Why is there a sandwave and why is it not there all the time? »