Constraining the timing of soil formation in linear dunes: A case study from the Strzelecki and Tirari Deserts, central Australia 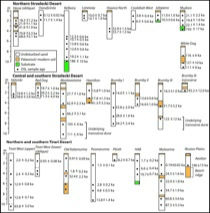 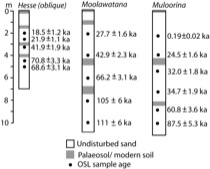 Hide
Figure 2 Stratigraphy and OSL ages of dunes in the Strzelecki and Tirari Deserts which contain multiple palaeosols, used to constrain the timing of pedogenesis. Details

Hide
Linear dune age plot for the Strzelecki and Tirari Deserts, showing the likely timing of pedogenesis (indicated by vertical dashed lines). Samples from the same interpreted stratigraphic horizons within individual dune sites are linked by horizontal dashed lines. The horizontal axis corresponds to age in thousands of years. Details 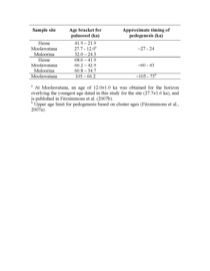 Desert dune formation can be episodic. The intensity of aeolian activity varies in response to environmental conditions, including concentrated reworking events and periods of prolonged partial activity. Buried soils (paleosols) provide the most unambiguous indicators of past environmental conditions within dune sediments, acting as markers of relative environmental stability, since soil formation (pedogenesis) takes place during breaks in dune building. Paleosols can also act as stratigraphic markers. Arid zone soils are characterised by precipitation of carbonates and gypsum, and clay coatings surrounding sand grains (cutans) (Fitzsimmons et al., 2009). Cutans are formed by the downward transportation of clays by infiltration of rain water. In some areas such as desert margins, soil horizons may be sufficiently distinctive as to isolate events of different age, thus establishing a relative history (chronology) of dune building events (Bowler, 1976). However in relatively more arid or sediment-poor regions, paleosols may be more difficult to distinguish or identify, or may be incompletely preserved due to "reworking" of dune sediments by wind. The potential for incomplete stratigraphic preservation within dunes is a critical consideration for reconstructing past environments.

Here we investigate dune stratigraphy and the timing of soil formation in desert dunes from the Strzelecki and Tirari Deserts of central Australia. The palaeosols in central Australian dunes exhibit similar characteristics to one another, meaning that no one period of pedogenesis can be distinguished from another in this region. Several cycles of dune building are preserved within the internal stratigraphy of many of the dunes in the Strzelecki and Tirari Deserts, however not every site contains the same stratigraphy (Figure 1). Successions of multiple sand units and palaeosols indicate that dune reactivation took place over several episodes of heightened aeolian activity. Some sites do not preserve paleosols, and at these sites it is possible that parts of the stratigraphic record were removed by reworking (Munyikwa, 2005). In comparable landscapes which are relatively more sediment-poor, such as the Kalahari Desert of southern Africa, desert dunes do not preserve any evidence of soil formation at all (Stone and Thomas, 2008).

Sedimentological analysis can provide information about the degree of reworking of desert dune sediments. This has implications for the preservation of dune stratigraphy. For example, fragmented coatings on grains, indicative of abrasion by aeolian reworking of underlying soil material, are common across the Strzelecki and Tirari Desert dunefields (Fitzsimmons et al., 2009). Reworking may completely remove horizons deposited during earlier arid periods. The removal of horizons from sections of individual dunes also occurs, possibly through limited lateral migration of dune crests. The propensity for sediment reworking also suggests that, in areas where sediment supply is limited, dune records may be biased towards the end of a period of aridity, although there may be dunes which preserve prolonged phases of partial activity and associated slow sediment accretion.

Linear dunes have previously been considered inefficient recorders of the history of aridity of a region due to reworking (Munyikwa, 2005), particularly when assessing the palaeoenvironmental record of individual or small numbers of dunes. However, integrated studies from multiple dunes across a region overcome the limitations of sampling bias in individual dune studies, allowing identification of multiple periods of dune activity and soil formation (Fitzsimmons et al., 2007a). The exact timing of soil formation in desert dunes cannot be directly determined by dating techniques. However, the timing of dune activity can be dated using optically stimulated luminescence (OSL) dating techniques. OSL measures when sediments were last exposed to sunlight, and therefore when the sediments were deposited/buried. Periods of dune stabilisation and soil development can therefore be identified where palaeosols occur within time periods devoid of age estimates. In the Strzelecki and Tirari Deserts (Fitzsimmons et al., 2007a), the OSL chronologies of individual dunes which contained multiple palaeosols were used to constrain the timing of pedogenesis (Figure 2). Soil formation must have occurred at some time between the deposition of the stratigraphic unit in which a paleosol formed, and the onset of the overlying unit. Three periods of pedogenesis were identified. Pedogenesis must have occurred some time between 106-73 ka, 60-43 ka and 27-24 ka (Table 1). Regional soil formation, and associated dune stability, was inferred from the overlap of these age ranges (Figure 3). The timing of pedogenesis also corresponds to an absence of ages for dune activity at the other sites.

It is also possible to compare the timing of soil formation with that of regional dune activity. Figure 4 shows the estimated timing of pedogenesis relative to the overall dune chronology for the region. It suggests that the periods identified for soil development correspond approximately to breaks in the dune accumulation record across the entire region. Because we cannot directly date paleosols, we cannot constrain the timing of pedogenesis more precisely. This is a feature of any area where reworking plays a significant role in dune formation. Nonetheless, OSL dating can be used as an effective tool to provide at least approximate timing for geomorphic processes such as pedogenesis, in the absence of direct dating techniques.