Figure 1. Map of major rivers in Kansas. The Kings Creek site is marked by a red star. Details 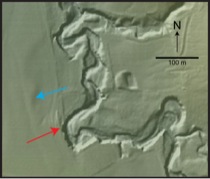 Hide
Figure 2. A digital-elevation-model (DEM) image that shows the site on Kings Creek, which flows generally to the north. The red arrow marks the position of the cutbank shown in Figure 3, and the blue arrow marks the terrace scarp (between terraces 1 and 2), which curves to the west from the cutbank, then turns north and decreases in height – its greatest height (about two meters) is at the cutbank. Details

Hide
Figure 3. The upper photo (actually, a composite of five photos) shows the cutbank exposure. The difference in height between terrace 1 and terrace 2 is not obvious in the photo because of the perspective of the camera (below the terrace surfaces). The lower photo shows the terrace scarp with a car for scale. Details

Hide
Figure 4. Schematic cross section of terraces and terrace-fills along lower Kings Creek at the Konza Prairie Biological Station. Only terraces numbered 1 and 2 are visible in Figure 3 (the photograph of the cutbank). Terrace number 3 is a cut terrace, cut into sediments of the alluvial fill beneath terrace 2, terrace number 4 is a small fill terrace, and point-bar gravel is the modern sediment being deposited along Kings Creek. Aggradations A and B are marked with large arrows. Details

Natural cutbank exposures along streams can provide information about the geomorphic history of the stream valley. In a fluvial system, extrinsic factors, such as climate, tectonics, or land use, can lead to changes in stream behavior. For instance, a change in climate, such as an increase in the intensity of rain storms, might lead to an increase in frequency and magnitude of floods, which could result in stream-channel erosion. Other changes in extrinsic factors could cause different stream responses. A careful investigation of the landforms and deposits of a stream would allow a reconstruction of the history of changes in extrinsic factors. This vignette describes an example of such a reconstruction.

Kings Creek, a tributary of the Kansas River in northeastern Kansas (Fig. 1), has experienced periods of aggradation (deposition) and degradation (erosion) on its valley floor. A cutbank exposure along Kings Creek (Fig. 2) on the Konza Prairie Biological Station permits a reconstruction of the Holocene history (the last 11,500 years) of the stream valley. The cutbank exposes the alluvium (stream deposits) underlying two stream terraces (flat surfaces marking former floodplains), which are separated by a terrace scarp (the steep slope between adjacent terraces) that is as much as two meters high in some places.

The older of the two fills is composed of silty, tan-colored sediment that is poorly layered and contains little gravel. It underlies a terrace in the lower parts of Kings Creek valley whose surface slopes gently toward the valley axis from the surrounding bedrock hills. A thin lens of charcoal buried in the silty sediments yielded a radiocarbon age of 8920 years before present (Fig. 3); the estimated calendar age of this charcoal is 10,000 years before present. A moderately developed soil profile in the silty alluvial fill at the terrace surface suggests a period of non-deposition that lasted thousands of years.


The lower of the two terraces is underlain by darker and coarser-grained (sandy) alluvium that contains some gravel in its lower part. The boundary between the two alluvial fills is abrupt, and can be clearly seen in the cutbank where the younger sandy alluvium rests on the older silty alluvium and abuts it beneath the terrace scarp (Fig. 3). This boundary is an unconformity -- a surface between two bodies of sediment that marks a period of erosion or non-deposition. Charcoal collected from the gravelly part of the fill yielded a radiocarbon age of 1770 years; its calendar age is about 1700 years before present.


From this and other information, the geomorphic history of this part of the Kings Creek valley can be reconstructed. During the last global glaciation, which culminated roughly 20,000 years ago, the Laurentide ice sheet did not extend far enough south to reach Kansas, but the Kansas climate at this time was cold and dry. At this time the valley of Kings Creek must have been scoured of any pre-existing alluvial fill because no sediments of this age have been found here. By about 10,000 years B.P. Kings Creek had begun depositing fine-grained sediment on its valley floor (aggradation A; Fig. 4). Much of this sediment may be reworked loess (wind-blown silt) from the surrounding hillsides, as suggested by its grain size (silty), its color (tan--the color of typical loess), and the surface of the sedimentary fill (which slopes toward the valley center from the hillsides, suggesting the source of the sediments was the valley walls). The valley floor continued to aggrade until sometime in the middle Holocene, when the stream changed its behavior and began downcutting to leave its former floodplain stranded as a terrace surface (terrace 1).


Kings Creek downcut into the older silty alluvial fill to within a meter of the modern stream level. Although we don't have ages directly on the period of downcutting, it had to have occurred after the formation of terrace 1 and prior to the initial aggradation of the sandy alluvium (i.e., before 1700 yr B.P.). The first sediments laid down by the stream at this time were gravelly, and these sediments were gradually overlain by sandy alluvium, which filled the previous entrenched chute to within a couple of meters of terrace 1. Kings Creek abandoned its floodplain by downcutting at the end of the second period of aggradation, and formed terrace 2 (aggradation B, Fig. 4). The last period of stream downcutting was punctuated by brief episodes when a cut terrace (terrace 3 eroded into older deposits) and a small fill terrace (terrace 4) were formed (neither of which is visible in the photos shown here). The modern stream is entrenched as much as six meters below the surface of terrace 1 (Fig. 4).


Why did Kings Creek change its behavior and shift back and forth between periods of aggradation and downcutting? Climate change is the most likely extrinsic factor in eastern Kansas over this time period that might cause the stream to aggrade or downcut its channel. Aggradation might have been coincident with times of relatively gentle rainfalls that didn't cause big floods of surface runoff, and downcutting may have occurred during periods when intense rain storms and large destructive floods were common. The fluvial geomorphic history of Kings Creek is similar to that of other small streams in the Great Plains, which reinforces the hypothesis that regional climate changes caused the changes in stream behavior, but the exact mechanisms have not yet been deciphered.

« The Snowplow, Lake Bonneville, Utah       Constraining the timing of soil formation in linear dunes: A case study from the Strzelecki and Tirari Deserts, central Australia »