Arroyo Cutting in the Southwestern U.S. 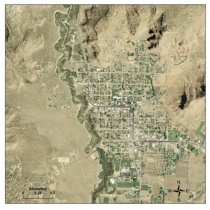 In the semiarid southwestern United States, water is extremely important. However, most streams in the region are ephemeral, meaning that they are dry for much of the year and flow only during flash floods and/or spring snowmelt. Many of these streams are confined to deep, steep-walled channels entrenched into alluvial valley bottoms. These channels are called arroyos, and can be found in drylands throughout the world (Figure 1).

Most arroyos in the Southwest were cut between 1880 and 1910 AD. Prior to this historic episode of arroyo-cutting, settlers characterized valley bottoms as marshy wetlands or grasslands with shallow channels. During arroyo-cutting, observers described the upstream migration of steep headcuts during successive floods. This incision and subsequent widening of channels led to the loss of thousands of acres of farmland; destruction of roads, dams, and canals; and ultimately the abandonment of several communities. Figure 2 shows the striking example of Kanab, UT, where a ~30 m deep arroyo now runs along the town's western edge.

For almost a century, geologists have debated the cause of historic arroyo cutting. Most hypotheses fit into one of three categories: (1) Intensive grazing and floodplain alteration associated with Anglo settlement led to increased runoff during storms, causing more erosive floods; (2) Arroyo cutting was the result of climate change. A wide range of climatic mechanisms have been suggested, ranging from fluctuations in groundwater levels to episodes of catastrophic flooding; and (3) Arroyo cutting and filling is an inherent behavior of semiarid drainage systems, wherein pulses of incision followed by widening and eventually aggradation migrate upstream in response to local slope anomalies. This last hypothesis is known as the 'complex response' hypothesis.

In reality, each of the above hypotheses likely played some role in arroyo cutting. Despite the complex interactions of these possible driving mechanisms, the regional synchronicity of historic arroyo cutting has led many recent workers to conclude that the dominant driving mechanism must be one that operates across a whole region rather than on individual watersheds. As a result, much attention has been focused on the various climatic drivers proposed in hypothesis (2).

Cutbanks along modern arroyos provide 'windows' into the hydrologic history (paleohydrology) of a stream. Alluvial deposits and stratigraphic relations exposed in these windows reveal that many cycles of arroyo cutting and filling have occurred throughout the Holocene (~10,000 BC-present). Evidence of these cycles lies in the form of aggradational sequences overlying and truncated by paleochannels (e.g. Figure 3). Usually, the aggradational "packages" represent the filling of an arroyo with sediment, and the paleochannels represent periods of arroyo cutting. Geologists initially relied on the relation of these aggradational packages to cultural artifacts of known age in order to establish their ages. Radiocarbon dating played a major role where no cultural features could be associated with alluvial deposits. Now, geologists are using optically-stimulated luminescence (OSL) dating where no cultural features or organic material can be found. All of the above tools can be used to constrain the timing of past arroyo cycles in order to establish their relation to hydrological and environmental changes.

Such chronostratigraphic studies have identified at least one other arroyo cutting event that was synchronously manifested in many drainages of the Southwest. This pre-historic arroyo cutting occurred around 1200 AD. The fact that this event took place in the absence of intensive grazing and floodplain modification suggests that it was driven by climatic changes. Interestingly, the pre-historic arroyo cutting also coincides roughly with the great Puebloan abandonment--when seeming successful, growing Puebloan cultures suddenly disappeared from the southern Colorado Plateau. Was prehistoric arroyo cutting related to this major cultural transition? It certainly seems plausible, as archeological evidence suggests that these burgeoning cultures relied on floodwater farming. If arroyos rapidly cut into the floodplains they were farming, irrigation would have become very difficult.

These two major arroyo cutting events bound a period of channel aggradation from around 1300-1880 AD. Valley-fills of this age have been correlated across the Southwest (Figure 4). Hack (1942) dubbed this alluvial fill the 'Naha' alluvium. It generally fills arroyos that were cut into an older alluvial fill known as the 'Tsegi' alluvium, which encompasses several aggradational sequences that occurred before 1200 AD. Ongoing research is focused on identifying the timing of these older arroyo cutting-and-filling cycles. Some studies have identified upwards of 10 alluvial fills that predate the "Naha' alluvium, though existing age control is limited.

If arroyo cutting events are climate-driven, what specific mechanism(s) are at play? Many have suggested that episodes of frequent, high-magnitude flooding were the causal mechanism. How can we test this hypothesis? One way would be to examine the flood record for a stream for which an arroyo cut-and-fill record is known. Because stream gages have existed for only a short period of time, geologists use paleoflood hydrology to characterize pre-instrumental floods. Evidence of floods can be depositional (e.g. flood deposits, driftwood) or erosional (e.g. truncated alluvial fans, scour lines). Such evidence acts as a proxy for flood stage, which, combined with detailed surveying, can be used to calculate the paleodischarge. Additionally, the same geochronological tools described above can be used to determine the age of the flood. These tools allow construction of the flood history of a stream.

If the reconstructed flood history for a stream suggests that arroyo cutting events coincide with episodes of frequent, high-magnitude flooding, it would suggest that that these episodes are the primary drivers of prehistoric and historic arroyo cutting events. If not, then geologists must come up with alternative explanations for these regionally synchronous channel changes.

« Constraining the timing of soil formation in linear dunes: A case study from the Strzelecki and Tirari Deserts, central Australia       Glacier Fluctuations Since the Last Glacial Maximum in Southwest Alaska »