Hide
Figure 1. Location of the Cooper Creek catchment, and the large anabranching system in SW Queensland known as the channel country. Average annual rainfall isohyets for the catchment are also shown Details

Hide
Figure 2. Aerial view of the channel country of Cooper Creek. Multiplpe channels are spread across this floodplain, which is in places ~60km wide. When flow ceases, water remains in the enlarged channel segments, and become billabongs, or waterholes, which are important sources of water during the dry season. Details 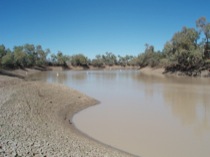 Hide
Figure 3. A typical billabong, or waterhole, in the channel country of Cooper Creek. This enlarged channel segment is ~7-8m deep at bankfull, and retains water long after flow has ceased. These are important aquatic habitats, especially during the dry season Details

Hide
Figure 4. Groundwater salinity in the sandly alluvial aquifers of Cooper Creek are stronly influenced by their proximity to Billabongs. Details

Much on the centre of Australia is an arid or semi-arid landscape, and the low average annual rainfalls make it difficult for the rivers to run and the lakes to fill. Some of the rivers that drain the centre of the continent however, have their headwaters within the reach of the summer monsoon, which has the ability to deliver substantial rainfall to these rivers, and sometimes to the centre of the continent. These large rain and flooding events are also critical to the ecology of the arid zone, which has adapted to the 'boom and bust' nature of resource availability.

The summer rains that feed the headwaters of these rivers are subject to large scale atmospheric 'forcings', such as the El Nino Southern Oscillation and the Indian Ocean Dipole, which results in substantial variation in monsoonal rainfall. As a result, the large rivers which drain into the centre of the continent, such as Cooper Creek, have some of the highest discharge variability in the world. This in turn has led to the development of a muddy multiple channel-floodplain (anabranching) river system, which typically have very low slopes over very large distances (Figure 1 & 2).

A unique feature of this anabranching system, are the series of billabongs, or waterholes, which are enlarged channel segments along the main course of the river (Figure 3). Billabongs typically occur at the confluence of two smaller channels, but are unique because they do not reach their maximum width/depth ratio until much further downstream, and then a short distance later, the channel abruptly terminates. Channel termination typically occurs in rivers when a clear slope advantage cannot be found, or alternatively due to a downstream decline in discharge. However, many billabongs initiate and terminate along the course of Cooper Creek, which suggests the overall slope of the system is not declining, and that discharge remains sufficient to maintain and indeed initiate new billabongs along its length, all without any significant tributary contribution. How then do Billabongs form? The answer it seems lies in the unique hydrology of the system.

We know that over ~400km of its length (between Windorah and Nappa Merrie), Cooper Creek experiences, on average, transmission losses (e.g. evaporation, floodplain routing, groundwater seepage) in the order of 75%. This is perhaps not surprising given the distance or the arid climatic setting. However, an analysis of the long-term longitudinal chemical trends reveals that the concentration of dissolved salts does not increase with increasing chloride concentrations. If evaporation were responsible for flow transmission losses over this reach, then we should find the opposite, chloride should increase with increasing dissolved salt concentrations. If evaporation does not play a major role, where then does all this water go? Let us consider the sedimentology and stratigraphy of the system.

Cooper Creek transports mud as both suspended and bed load (in the form of mud aggregates), and has done so for most of the Holocene and possible late Pleistocene. These deposits have formed a thick mud floodplain, beneath which lies older, almost homogenous coarse to medium quartz sands deposited when Cooper Creek sustained much higher discharges during the Quaternary (Nanson et al., 2008). If a channel has sufficient stream power, it can scour the mud base of the channel, and expose the clean sands and allowing discharge of stream water into the underlying water table. Once the floodwaters cease, the mud carried in suspension settles to the base of the channel once more, thus sealing the channel and isolating it from the water table. This mechanism allows for local reductions in channel discharge which may explain the abrupt termination of some billabongs. But is this plausible?

Groundwater investigations reveal the water table is ~10-12m beneath the floodplain, and ~2-3m beneath the maximum bankfull depth of the channels, thus water retained in the billabongs following flow cessation is 'perched' above the local aquifer. Given the thickness of the floodplain mud, it is unlikely that floodwaters can recharge through the floodplain, even if large soil desiccation cracks exist. This is further supported by the salinity of the regional floodplain groundwater, which in places approaches that of seawater, indicating much of this groundwater has not been recharged with freshwater in quite some time. If however, we look at groundwater below and adjacent to the billabongs where their depth is greatest, we find remarkably fresh groundwater with very similar chemistry to the surface waters (Figure 4). This confirms that during large flood events, the muddy channel base can be scoured, and freshwater recharged into the shallow groundwater system, which in turn develops freshwater lenses that sit above and adjacent to much saltier, regional groundwater. These processes may be important in other large alluvial rivers with highly variably discharge, and has implications for the water resources of the local populations.