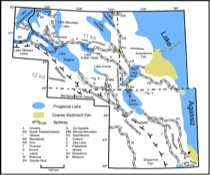 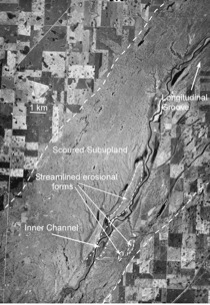 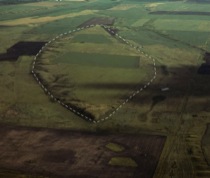 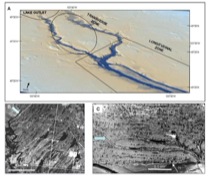 Proglacial Lake outbursts along the southern margins of the Laurentide Ice Sheet
As the Laurentide Ice Sheet retreated northward through the Great Plains and midwest area of North America, meltwater drainage initially occurred southward toward the Gulf of Mexico through the Mississippi Valley and its tributaries. As the margin receded north of the Mississippi drainage divide toward the isostatically depressed Hudson Bay lowland (which was lowered because of the enormous weight of the ice sheet upon the crust), vast amounts of meltwater ponded in many short- to long-lived lakes. Glacial Lake Agassiz was the largest and best-known of these lakes, but numerous smaller lakes formed in the prairie regions of the U.S. and Canada (Fig. 1). In addition to isostatic depression of the crust by the ice sheet, reasons for these proglacial lakes include regional slope of the land surface towards the north, and the formation of temporary dams of ice and sediment.

Most of these lakes were unstable resulting in their sudden and catastrophic drainage. The volumes of water released were huge, on the scale of some of the present-day Great Lakes, and eroded glacial sediments and weakly resistant bedrock predominant in the region. The events themselves are called outbursts and channels eroded by the floods are known as glacial-lake spillways. Studies of the landforms and sediments of many spillways have illustrated the magnitude and processes, both erosional and depositional, which characterized these events (Kehew et al., 2009). Outburst floods in the Great Plains are broadly similar in process and resulting landforms to the megafloods that carved the channelel scabland of eastern Washington and surrounding areas (Baker, 2009 and references therein).

Triggers for the outburst floods included failure of ice or debris dams at some point along the rim of the basin, exposure of a lower outlet by ice retreat, and outburst flows from upstream lakes causing the receiving lake to overtop its basin and cut a new outlet or downcut an existing outlet.

Once a dam was breached, meltwater released catastrophically, producing large-scale channels and other erosional landforms. The substrate materials along the southern margin of the Laurentide Ice Sheet are dominated by unconsolidated glacial drift and poorly lithified Mesozoic and Tertiary sedimentary rocks, which offer little resistance to erosion by high velocity floodwaters. Incision typically continued until a resistant substrate was reached or the catastrophic flow ceased.

Characteristic landforms
The spillway is the most distinctive erosional landform formed by glacial-lake outbursts along the southern margin of the Laurentide Ice Sheet. These deep valleys are really trench-shape channels with steep sides and relatively uniform widths (1-4 km) and depths (25-150 m) (Kehew et al., 2009; Kehew and Lord, 1986, 1987). Most spillways begin and end at glacial lake basins. Spillways can sometimes be divided into two major components: a narrow, deep inner channel and a scoured sub-upland surface (Figs. 2,3) The scoured sub-upland surface represents the first stage of erosion, when no channel of sufficient size was available to the flood and water covered a broad area. As flow continued, erosion became concentrated within a smaller cross sectional area and began to erode the inner channel. Additional ersoional landforms of outbursts include anastomosing channels, streamlined erosional forms, longitudinal grooves, transverse ripple forms, potholes and obstacle scour depressions. Streamlined erosional forms (Fig. 4) achieve the teardrop shape of a lemniscate loop (a streamlined shape similar to the cross section of an airplane wing), which is an equilibrium shape that minimizes erosional drag on the object. Longitudinal grooves are linear scours that represent the action of a stable longitudinal vortex in the flow. Vortices are cells of circulating water that develop in the turbulent floodwater.

Depositional landforms, although scarce, are equally impressive. Within the inner channels of the spillways, erosion was dominant, but occasional bar-like deposits of coarse gravel occur. The extreme size of boulders in these deposits indicate the tremendous competence of the flows. The presence of a sand-size matrix supporting larger clasts suggests that the flow was at times hyperconcentrated (Lord and Kehew, 1987) (Fig. 5). Hyperconcentrated flow developes when the sediment concentration is greater than that of normal stream flow, but less than that of debris flows. Large clasts tend to be separated from each other and surrounded by a matrix in hyrperconcentrated flow rather than being in contact with each other as they are in stream flow.

Where spillways terminate at basins that contained proglacial lakes at the time of formation, outbursts flowing in the spillways inundated the lakes and deposited sediments that can be distinguished from normal meltwater deposits by their thick, coarse-grained, homogenous vertical sections that systematically fine with distance from the inlet (Kehew and Clayton, 1983; Kehew and Lord, 1987; Lord, 1991). Deposition of the flood deposits, mainly well-sorted sands, likely occurred by a mix of low-density and high-density turbidity currents.

Maximum discharges and velocities of glacial-lake outburst floods were immense. Typical estimates for outbursts along the southern margin of the Laurentide Ice Sheet range from 0.2-1.0x106 m3/s, although values as high as 5 x 106 have been suggested for the final drainage of Lake Aggasiz intoHudson Bay (Teller et al., 2002; Clarke et al., 2004). Estimated velocities range between 5 and 12 m/s, although larger values have been suggested for some spillways.


Glacial Lake Souris outburst spillway
One of the best known outbursts in the mid-continent region was the Glacial Lake Regina outburst (Kehew et al., 1986, 1987; Lord and Kehew, 1987) which eroded the Souris Spillway containing a well-defined inner channel, a scoured sub-upland 10-15 km wide, longitudinal grooves, transverse erosional ripple forms, anastomosing channels, and streamlined hills (Figs. 3, 6) (Lord and Schwartz, 2003). The outburst began with the breach of a stagnant or dead ice dam that released about 7.4 x 1010 m3 of water from glacial Lake Regina (Fig. 1) generating a discharge of about 0.5 x 106m/sand velocities from 3 to 12 m/s (Kehew and Clayton, 1983; Lord and Kehew, 1987; Lord and Schwartz, 2003). On the scoured sub-upland, flow obstacles were modified into streamlined hills, and longitudinal vorticies in the flow produced longitudinal grooves. Gradually, flow became concentrated into the inner channel as it was downcut. As erosion of weak substrate progressed, the flow became hyperconcentrated and inner-channel bars are composed of massive, homogenous, matrix-supported boulder gravel. Downstream, the flood inundated Glacial Lake Hind (Fig. 1), depositing thick, well-sorted sand units.