Regional trends in desert dune morphology and orientation: Examples from the Australian deserts 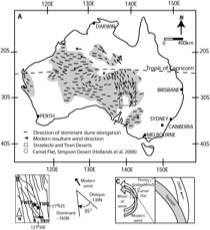 Hide
Figure 1 (A) Linear dune orientations and modern resultant wind directions in Australia, with (B) obliquely oriented dunes compared with the dominant trends and modern wind directions in the northern Tirari Desert. TWD is a dune in the dominant orientation which directly overlies the TWO obliquely oriented dune, and (C) the difference between dune/interpreted palaeowind trend and modern winds at Camel Flat in the Simpson Desert (adapted from Hollands et al., 2006). Details

Hide
Figure 2 Maps, cross sections, stratigraphy and chronology for dominant and oblique linear dune orientations at the TWD and TWO sites in the northern Tirari Desert. TWD is a dune in the dominant orientation which directly overlies the TWO obliquely oriented dune. The rectangular boxes correspond to auger holes taken from the dune crests, from which samples were collected and stratigraphy interpreted. Details

Dunes are the major landforms within the desert regions of the world, owing largely to the dominance of wind over water as a geomorphic agent in the arid zone. Linear dunes, which form parallel to the resultant vector of sand-shifting winds, are the most abundant desert dune forms globally. In Australia, linear dunes occupy approximately one-third of the continental land surface, and form a large continental-scale whorl (Wasson et al., 1988) (Figure 1A).

The shape (morphology) of linear dunes varies significantly within dunefields, a complexity arising from their response to the factors causing their formation. Critical mechanisms include wind regime, sediment availability, physical barriers to migration, and local hydrology. Wind regime influences linear dune orientation. Physical barriers to migration, such as rivers, hills, alluvial fans and active floodplains or groundwater discharge zones, also have the potential to alter the orientation, spacing and level of organisation of a dunefield. Morphologic variability is most visibly manifested in the spacing and density of junctions between dunes, and their orientation. Several models exist for linear dune formation at large scales; for discussion on this topic refer to vignette "Linear dune formation: longitudinal elongation or local wind rifting?". Sediment availability influences dune spacing and size; dune size is sometimes expressed through changes in height, and sometimes by changes in width. For simple linear dunes such as those in the Strzelecki and Tirari Deserts of central Australia (Figure 1), spacing between dunes is a function of sediment supply, dune height is limited and mostly constant, and sediment availability is expressed by spacing and dune width. In simple linear dunefields such as these, spacing can reasonably be used as an indicator of sediment supply, and is related, by extension, to substrate type (Fitzsimmons, 2007; Wasson et al., 1988).

The Strzelecki and Tirari Desert dunefields form part of the most spatially variable section of the Australian continental dune whorl (Figure 1A). The orientation of linear dunes reflects the direction of sand-shifting winds prevailing during their formation. Linear dunes typically form within 30° of the resultant wind vector (Tsoar, 1978). The orientation of dunes in the Strzelecki and Tirari Deserts is oblique to the net direction of the current sand-shifting wind regime. In some places, linear dunes lie in secondary orientations oblique to both the dominant dune trend and the present wind regime as overprinting relationships (Figures 1B, 2). Localised areas of intersecting dune trends also occur in the Simpson Desert to the northeast (Hollands et al., 2006) (Figure 1C). The preservation of multiple dune orientations suggests that linear dunes may be reoriented over time in response to significant changes in wind regime.

The timing of dunefield reorientation may help us to understand when and how this process occurred, since we can compare what took place in the dunefields with proxies for environmental and climatic change elsewhere in the Australian region. Evidence from dunes in the Simpson Desert indicates that the wind whorl has migrated southward since the Last Glacial Maximum (LGM: ~20 ka) by approximately 1-1.5° (Hollands et al., 2006). In the Simpson Desert, linear dunes trending oblique to the modern wind regime formed between 74-14 ka, while linear dunes which reflect the modern wind regime initiated between 14-10 ka. By comparison, in the Strzelecki Desert, dunes in the dominant orientation formed around 34.7-28.6 ka, suggesting that this orientation was established in this region well before the LGM (Fitzsimmons et al., 2007a).

The proposed mechanisms responsible for dune reorientation vary. Periodic strengthening and expansion of the anticyclonic pressure belt, responsible for the anticlockwise wind system which formed the Australian dune whorl, has been suggested, as has equatorward compression of the anticyclone system. The oblique dune orientations at the TW site do not correspond to a geometry approximating a transposed dune whorl, nor are the dunes here LGM in age, which would be expected in the case of a straightforward latitudinal shift in wind regime. It is possible that the northern Strzelecki and Tirari Desert region corresponded to a zone of directionally variable winds in the centre of the anticyclonic system in the past, as is the case for the present day Simpson Desert area further to the north, implying a more southerly or larger anticyclone in the past.

Pre-existing morphology also appears to play a role during periods of reactivation. Dunes in the Strzelecki and Tirari Deserts maintain their original morphology under conditions which would not necessarily be conducive to perpetuating such forms, in a kind of morphologic inertia. Dating of the timing of dune reactivation also points to coeval reactivation of transverse (forming perpendicular to prevailing sand-shifting winds) and linear dunes in the Strzelecki Desert (Fitzsimmons et al., 2007b). It is likely that morphologic inertia also played a role in the coeval reactivation of pre-existing transverse dunes. The relationship between past and present dune orientations is clearly complex, with dune orientations prior to the LGM preserved, and both linear and transverse dunes affected by morphologic inertia following dunefield reorientation.