The Connection Between Hydrology and Glacial Erosion

UTM coordinates and datum: none 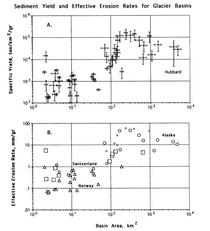 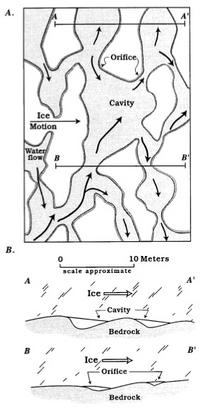 Hide
Idealized subglacial cavity network in plan view (A) and cross section (B). Unshaded areas are regions of ice-rock contact; shaded areas are regions of ice-rock separation (cavities). Flow directions in the cavities are indicated by arrows. Oriﬁces are the most constricted parts of the cavity network and account for most of the energy losses. Fountain and Walder, 1998, originally after Kamb, 1987. 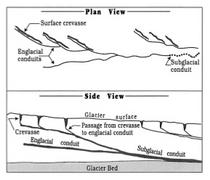 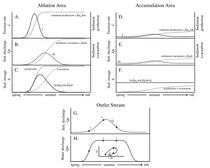 Hide
(A-F) Conceptual model of the expected time series of erosion rate and sediment production (A and D), sediment discharge and evacuation (B and E), and sediment storage (C and F) over the melt season for the ablation (A-C) and accumulation (D-F) areas. Bedrock erosion in the ablation area occurs in early summer, driven by a pulse of sliding. The erosional products appear in the outlet stream as a pulse of sediment discharge in early to midsummer. The temporary subglacial storage of sediment within the ablation area is exhausted by late summer. In the accumulation area, erosion rates are relatively steady because of steady slow sliding but are lower than ablation area rates because of shielding of the bed by stored sediment (F). Evacuation is also lower (E) because the accumulation area is drained by a less efficient hydrologic system; subglacial conduits do not reach this region. If the rate of erosion and evacuation are equivalent, there is no net change of sediment storage (F). (G and H) Sediment and water discharge in the outlet stream. The relationship between sediment discharge and water discharge (inset in H) is dominated by sediment evacuated from the ablation zone and traces a clockwise hysteresis loop over the summer; this is illustrated using three points in time, labeled 1 – 3. Riihimaki et al., 2005.

Bedrock erosion and sediment transport by glaciers strongly influences the long-term evolution of mountain landscapes. Glacial landforms are ubiquitous in high elevation areas. Moreover, modern sediment yields in glaciated versus unglaciated regions suggests that glaciers tend to erode their beds more rapidly than rivers (Fig. 1). However, basin-averaged sediment yields for glaciated basins span more than an order of magnitude, even for basins that are similar in size and have similar lithologies. The underlying causes of this variability in sediment yield, and to what degree it reflects modern bedrock erosion rates, remain topics of debate.

Variations in glacier hydrology may explain part of the large variability in sediment yield from glaciated basins. Water within glaciers can be grouped into three systems (Figs. 2 and 3): 1) englacial pathways within the ice, dominated by cracks and tunnels and influenced by the location of active and inactive crevasses and moulins, 2) cavities in the lee of bumps in the bed, connected to the englacial system above, and whose size and connectivity through orifices grow through sliding and collapse through ice creep, and 3) efficient conduits that serve to drain water from the linked-cavity network. In temperate glaciers, the entire system is driven by surface melting and precipitation, which changes seasonally. The snowpack delays delivery of meltwater to the englacial system.

Hydrology impacts sediment yields in two ways. First, high water pressure beneath the glacier enhances the rate that the ice can slide over its bed. Observations at some glaciers indicate that more rapid sliding results in faster bedrock erosion rates. Because linked cavities are maintained by high water pressure, a glacier hydrologic network dominated by linked cavities is likely to experience enhanced basal sliding and resulting erosion. Second, the ability of water flowing through the glacier system to transport sediment is dictated by the rate of water flowing through the system. In general, subglacial conduits have high capacity and competence to transport sediment due to their large water fluxes and relatively rapid water speeds.

Glacier hydrologic systems that switch from linked-cavity to conduits are likely to produce maximum sediment yields because they experience basal sliding and erosion during the linked-cavity phase, and sediment flushing during the conduit phase (Fig. 4). In some temperate glaciers, this switch occurs seasonally with changes in the amount of meltwater input to the hydrologic system. Conduits tend to form or enlarge near the terminus in the spring, and extend further upglacier as the melt season proceeds. As melt rates slow at the onset of winter, conduits collapse. Seasonal changes in the transport of sediment out of the glacier system should therefore be strongly controlled by the evolution of this subglacial drainage system.