Short snippet of text about symbiosis in the sea. 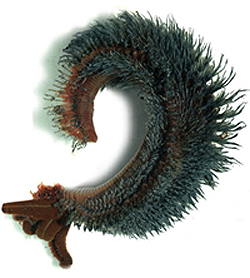 In 1997, nearly 21 years after the discovery of the first hydrothermal vent system, marine biologist Craig Cary and colleagues identified the most heat-tolerant animal on Earth—Alvinella pompejana, the Pompeii worm. Pompeii worms were initially discovered by French researchers in the early 1980's and are described as deep-sea polychaetes that reside in tubes near hydrothermal vents along the seafloor. They can reach up to 5 inches in length and are pale gray with red tentacle-like gills on their heads. Perhaps most fascinating, is that their tail end is often resting in temperatures as high as 176º F, while their feather-like head sticks out of the tubes into water that is a much cooler 72º F. Scientists are attempting to understand how Pompeii worms can withstand such extreme temperatures by studying the bacteria that form a "fleece-like" covering on their backs. Living in a symbiotic relationship, the worms secrete mucous from tiny glands on their backs to feed the bacteria, and in return they are protected by some degree of insulation. The bacteria have also been discovered to be chemolithotrophic, contributing to the ecology of the vent community.

Learn more about the Pompeii worm with this collection of online resources. Back to Top