Challenges to using math in geoscience 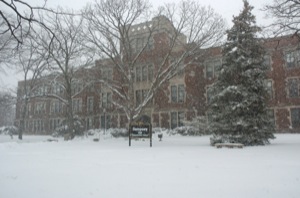 University of Wisconsin Oshkosh is a four-year comprehensive university located in NE Wisconsin and serves about 12,000 students who mostly come from within a 100-150 mile radius; over 50% of our students are first-generation college students. Wisconsin High Schools have standards that require students to take only two years of mathematics (Algebra and Geometry); thus, a large number of these students place into remedial mathematics courses (College Algebra). We perceive that The Math You Need, When You Need Itcan provide a way of "leveling the playing field" for all students in introductory geoscience. In addition, it has helped us to reduce the amount of time that we spend teaching to the "lowest common denominator" by allowing us to have the expectation that students come to lab prepared to do the mathematics needed for that particular exercise.


More about your geoscience course 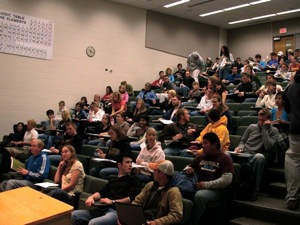 Physical Geology is the first in a sequence of two general education courses designed to satisfy the lab science general education requirement for BS majors. Of the 140-180 students who enroll in Physical Geology each semester, many report that they choose it because it is seen as a mostly descriptive science - "rocks for jocks" or that it seemed like the least scary of the lab sciences. When students are asked to complete basic mathematical problems in the laboratory sections, we often hear the phrase "This is geology, why do I have to do math?". We also have many students who, because of the perception of geology as a descriptive science, are surprised that they need to know basic mathematics to perform science. On the other hand, there are also many students in Physical Geology who are perfectly capable of performing higher level mathematics and find the math we ask them to do menial. The range of abilities has presented many challenges to instructors of introductory geoscience at Oshkosh.


Before we implemented The Math You Need, instructors of Physical Geology addressed the quantitative content covered in the course on an ad hoc basis. Because a variety of instructors teach both the course and the labs, we tried a number of strategies. We have spent valuable class/lab time reviewing mathematics, assigned pre-lab homework (that often had little support attached to it for the math, e.g., a half page worksheet that required students to do unit conversions with little introduction to the mathematics) and used office hours or lab time to help students one-on-one. Prior to implementing The Math You Need, we would spend a significant portion of at least 6 labs going over the basic mathematics.

Which Math You Need Modules will/do you use in your course?

Strategies for successfully implementing The Math You Need


As stated above, we think of this program as giving the instructor and students a base level of mathematics that they can be expected to perform in our labs, thus we require The Math You Need from every student. 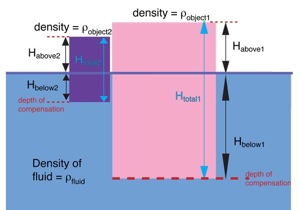 Because students at UWO do not perform tasks unless they see them as benefiting them or increasing their grade, we have always counted module completion as a portion of their lab grade. We also reinforce the reasoning behind using these modules by reminding students often about the support it provides and reinforcing connections between the modules and geoscience in class and lab kdflsdghk. The number of modules used varies from instructor to instructor but we have used Density, Plotting Points, Constructing a Best-Fit Line, Rearranging Equations, and Unit Conversions. Modules are always attached to a given lab with reference to exercises in that lab. Instructors who use The Math You Need administer the pre-test within the first week of classes and then introduce an initial module (usually rearranging equations) to be due before the first lab (in the second week of class). Anecdotally, instructors indicate that the strength of The Math You Need lies in being able to refer back to it and knowing that all of the students are expected to be familiar with the content of each module. Furthermore, students are suggesting that they feel like it helps them with the course itself.

Reflections and Results (after implementing)


In general the use of TMYN has been a success at UW Oshkosh. Over the three semesters that we have used The Math You Need, we have had anywhere from 84-95% of students in our large lecture courses fully engage and participate in the online resources. Instructors feel that the success lies in the fact that they can refer to the modules and students are familiar with the tools provided there. Students have improved scores on quantitative tasks by up to 30 percentage points from the pre-test to the post-module quizzes. There are two aspects of the program that we see as strengths for our students: 1) the use of this across the entire course allows all students to see what is expected of them in terms of math and 2) it gives the instructor some class time back to use for geologic problem solving, instead of mathematics remediation.

We have implemented The Math You Need three times over the past two years and have modified it each time. When we started using The Math You Need, we only allowed students to take the post-module quizzes once and gave them full credit for just taking the quiz. However, in the second and third implementations, we felt that our goal was mastery of the material so that students would come to lab completely prepared to do the mathematics, thus we allowed students to take the quizzes until they were satisfied with their scores (within a time limit). Students seemed to like this and the instructors saw an increase in preparedness for the lab.