Points on x-y plots
can also be called:

How do I plot points on a graph?
Plotting geologic data in x-y space

Why should I plot points? 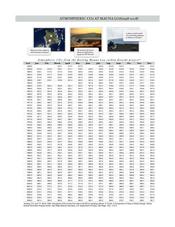 In the geosciences, we deal with large volumes of data, both observational and measured. This may be in the form of climate data, rock chemistry, elevation measurements, seismic data, etc. We generally compile data into tables and when we want to know the relationship of one variable to another, one of the easiest ways to do that is to put that data on a plot. Take the table of data to the right. Just looking at it (you can click on the image to open a bigger version in a new window), can you tell what the general trend in CO2 values has been for the past 50 years? Has the trend changed in the past 10 years? How about the last 5 years of record? Does the data vary from month to month? Are there seasonal cycles? So many questions! And they can all be answered with a simple x-y plot. 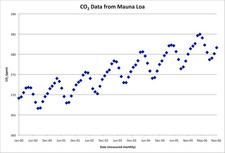 Bivariate (x-y) graphs help us to visualize and categorize large volumes of data without having to sort through cumbersome data tables. Imagine having to look at the Mauna Loa table as pairs of data (each month for 48 years makes 576 pairs of data!) and trying to figure out the relationship of one variable to another! Or, even worse, a table that isn't organized by date or in numerical order...It's much easier to see on a graph that CO2 has generally increased over the 7 years shown here. You can also see distinct seasonal changes where carbon dioxide is high in May and low in October when the data is plotted on a graph! The rate of change seems to be pretty constant over the time period shown here.

Where is graphing used in the geosciences?

Geoscientists use graphs to illustrate all kinds of issues in the science. In introductory geoscience courses, you may be asked to plot data in conjunction with units that deal with:

Show me some more topics

If you are struggling to remember how to plot points, this page is for you! Below you will find some simple steps for plotting points on an x-y graph and links to pages to help you with the next steps.

Any plot or graph that has two axes is an x-y (or bivariate) plot. One axis (generally, the horizontal one) is the "x-axis" and the other (the vertical one) is considered the "y-axis". But, you can use any variable for either one, all you need is a data set that has two sets of related data. Below there is an example of a set of data points for how basalt melting temperatures change deeper in the Earth. 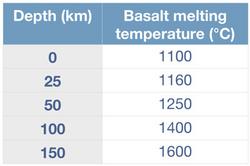 Table showing how melting temperature of basalt changes with depth in the Earth. Modified from Tarbuck et al., 2008, Applications and Investigations in Earth Science, 6th edition,.

When we plot data on a graph, there are several steps that you can follow to make sure that you don't forget anything:

You can download and print a sheet with the steps on it here (Acrobat (PDF) PRIVATE FILE 35kB Sep10 08).

I am ready to PRACTICE!

If you think you have a handle on all of the things listed above click on this bar to try some practice problems with worked answers!