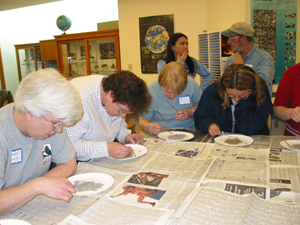 Earth system science courses are distinguished from Earth science courses through their explicit multidisciplinary focus on the connections, interactions and feedbacks between the system components: atmosphere, hydrosphere, lithosphere, biosphere, anthroposphere, and exosphere.

Processes, issues, and themes that operate on global scales serve as foci. The course is united through an emphasis on the following questions:

In the definition of the spheres of the Earth system used here, human activity is singled out from the rest of the biosphere because of the unique spatial and temporal scales manifested in recent and sub recent human impact. The exosphere (space) is also identified because while many of the interactions we study are examined as if they were closed systems, we know that there is a movement of matter and energy between the Earth and space. Earth-space interactions are responsible for global change occurring on millennial time scales. This is covered in more detail by Using an Earth Systems Approach Module, and ESS in a Nutshell both in Starting Point.