What is Earth System Science?

Earth system science embraces chemistry, physics, biology, mathematics and applied sciences in transcending disciplinary boundaries to treat the Earth as an integrated system and seeks a deeper understanding of the physical, chemical, biological and human interactions that determine the past, current and future states of the Earth. Earth system science provides a physical basis for understanding the world in which we live and upon which humankind seeks to achieve sustainability. 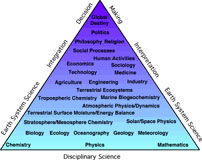 Earth system science builds upon the fundamental disciplines, which form the scientific integrating basis for any discussion of the system as a whole. This representation shows the critical relationship of ESS concepts as a bridge between the disciplines and the increasingly interpretive and integrative endeavors of human social processes. The future of our planet and the destiny of humankind are dependant upon this interdisciplinary pyramid of Earth system processes and phenomena (Johnson and Ruzek, 1999)

Given the concerns that humankind is impacting the Earth's physical climate system, a broader concept of Earth as a system is emerging, including societal dimensions and the recognition that humanity plays an ever increasing role in global change. Within this concept, knowledge from the traditional Earth science disciplines (geology, meteorology and oceanography along with biology) is being gleaned and integrated to form a physical basis for Earth System Science.

Earth System Science fosters synthesis and the consideration of a holistic model in which disciplinary process and action lead to synergistic interdisciplinary relevance. However, the development both conceptually and physically of the Earth system model and its quantitative assessment in the classroom and laboratory is a continuing, formative processes which requires nurturing and commitment to eclectic learning beyond one's discipline. The intersection of disciplinary specialties often provides the most fertile and interesting fields for study, but is easily sidetracked by traditional disciplinary interests. 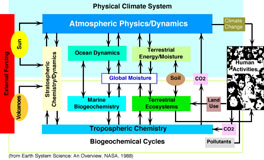 In the mid-1980s NASA began a systems approach to cataloging the elements of the Earth system, their linkages, dependencies and fluxes. This simplified version focuses on the physical elements of the system, but relegates human processes to a simple box. A more complete version, which only begins to hint at the true complexity and interdependencies of the complete system, appears below. (NASA, 1988)