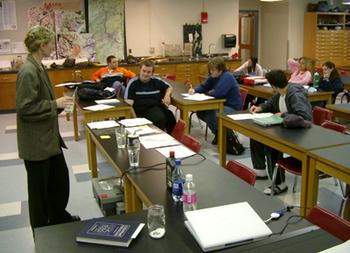 How to set up the water contamination demonstration

Materials: Seven tall, clear, drinking glasses (preferably identical). Seven straws. A long spoon for stirring. Enough rainwater (e.g., collected from a rain spout) to fill one glass (if not readily available, substitute tap water and tell the students it is rainwater). A bottle of salt. A container of sugar. A bottle of motor oil or transmission fluid. A bottle of store-bought bottled water.

Tips on how to use the water contamination demonstration in class 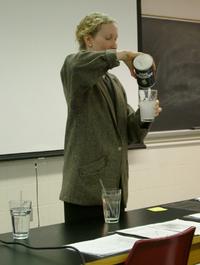 What is pure water? To begin the interactive part of the demonstration, pick up the glass of rainwater and pose the following question: "Is this rainwater pure and safe to drink?" Someone might request that you define the meaning of pure. Explain that pure water contains no substances other than hydrogen and oxygen. Distilled water is pure water. Although students might guess that rainwater is likely to be pure, you can explain that it probably is not. Because water is a solvent, numerous substances are easily dissolved in it. As rainwater falls from thousands of feet above the Earth, it passes through clouds and atmospheric gases containing industrial pollutants and exhaust fumes. Nitrogen and carbon dioxide and numerous other gases are dissolved by water. If you were to set your glass over a heat source, tiny bubbles might rise to the surface as these gases--less soluble at higher temperatures--escape again to the atmosphere. This can be shown if you use a hot plate during the demonstration.

Which water is safest to drink? Pose the following question to students after discussing the 'purity' of rainwater: "Which of these glasses of water is likely to be the safest to drink, which is least safe to drink, why, and how do you know?" These questions are the crux of the demonstration and can be the basis of a discussion and lecture for the remainder of the class period. 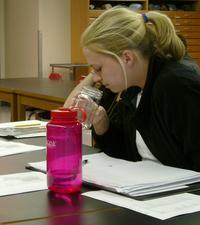 When does an impurity become a contaminant? If the class is small enough, pass around the glasses and encourage students to use their sense of smell (but NOT to drink from any of the glasses)--which one has an offensive odor? They probably would feel safe drinking the rain, bottled, or tap water. All will say with certainty that they would not drink water with even a drop of motor oil, which can be smelled even in such a tiny amount. They might consider drinking the glass with one teaspoon of salt, but would not want to drink the glass with nine times more of the substance, that to which you added 3 tablespoons of salt. Salt is vital to life, as is water, but too much salt can cause illness in human beings, and even cause death. On the other hand, you can point out to them that if it were sugar rather than salt, they might readily add a tablespoon of it to their water, and often do so for example when making a glass of iced tea. As with salt, however, too much sugar might make the drinker feel ill, although it would not be as harmful as too much salt. Explore this dilemma of how to determine how much is too much of something that is safe in certain amounts, but not safe above some level. To make this point even more clearly, you could ask if a glass of water with only a very tiny drop of motor oil would be safe to drink.

To add drama, take a drink from the straw in the glass of low concentration salt water, then pretend to drink from the glass with a higher concentration of salt. Most students will groan or call out not to do it. For even more drama, while drinking from the glass of sugar water, add more and more sugar, taking tiny sips as you do so. As students groan, ask "What is the problem, since sugar is not poisonous, and there is plenty of sugar in sodas that you drink every day?" 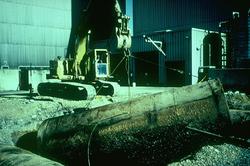 Underground chemical storage tanks are one of the greatest sources of groundwater contaminants. More than two million commercial underground storage tanks are known to exist in the United States, and at least 100,000 are known to be leaking at present. Photo by Kevin Svitaana.
How are contaminants removed from water? Ask students how one would go about removing the various impurities from the different glasses. Removing a salt in solution requires a different strategy than removing an immiscible substance that floats, such as low-density motor oil. An analogy to the motor oil in water is the case of leaking underground storage tanks. The question of how to remove impurities from the glasses can lead to a lecture on cleaning up pollutants from streams and ground water.

Ideas for discussing the water contamination demonstration in class

This detailed discussion of drinking water sources and standards can be incorporated into a post-demonstration lecture.

The Office of Water Quality at the USGS (more info) maintains an excellent database on the quality of the Nation's surface-water and ground-water resources.

Globalsecurity.org provides an excellent summary of the long history of groundwater contamination and clean-up at the Massachusetts Military Reservation (MMR) on Cape Cod. The MMR is located over the Sagamore Lens, a sole source aquifer that provides drinking water for 200,000 year-round and 500,000 seasonal residents of Cape Cod. This site is a an important case study to explain the legacy of groundwater pollution associated with industrial and military activities of the 19th and 20th centuries.

The Natural Resources Defense Council provide fact-filled comparisons of the quality of bottled and tap water.