This page first made public: Oct 3, 2005
This material is replicated on a number of sites as part of the SERC Pedagogic Service Project
Dorothy Merritts, Franklin and Marshall College
(dorothy.merritts@fandm.edu) 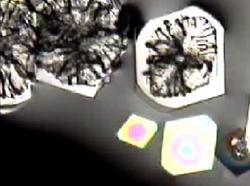 This demonstration uses melted phenyl salicylate (C13H10O3--melting temperature 43°C) to show how crystals nucleate and grow as the temperature of the liquid melt decreases. Salicylate crystals from a chemical supply store are sprinkled on a glass slide and melted on a hot plate. The slide is placed under a microscope and videotaped as crystals form. Seeds of solid salicylate are added to speed and enhance crystal growth. A quicktime movie of the demonstration can be shown repeatedly, and the instructor can go back and forth in the movie, pointing out features such as the squirting of remaining melt between colliding crystals.The demonstration can be completed in several minutes.

How to set up the demonstration

To use the demonstration in class, you can reproduce the original experiment, or show video footage of the experiment ( PRIVATE FILE 1MB Mar31 05). If you do the original demonstration, you must get all materials in advance, and might have to order the salicylate, so allow at least a week to get all items together. The video footage that we have prepared is a much simpler alternative that requires no set-up time. We have extracted the best video footage from ~15 minutes of crystal growth, and reduced the entire footage to ~one minute.
Materials and Equipment: Procedure:
Sprinkle a small amount of salicylate crystals on a glass slide and heat just until they begin to melt (~43°C) on a hot plate. If the slide is placed on several large metal washers on the hot plate, it will be easier to pick up with forceps. The slide will retain enough heat to complete the melting process after it is lifted from the hot plate. Be careful not to overheat the sample, as it will evaporate and take longer to cool sufficiently for recrystallization. Place the slide on the stage of the microprojector (or microscope with television system) and observe recrystallization under magnification.

You can prepare two samples, cool them at different rates, and compare them to each other. To increase the cooling rate, you can briefly place the slide with melt on a cold surface (e.g., ice block). Whereas crystallization can be observed easily on the slide that is cooled slowly, you might not have time to observe the more rapidly chilled sample before crystallization is complete. Distinct differences in the final crystalline mosaic will be apparent under the microscope nevertheless.

Tips on using the demonstration in class

We used to do this demonstration at Franklin and Marshall College during a laboratory exercise, but over the years I began using it during the lecture as a demonstration to explain crystallization. I soon realized that a video of the demonstration was more effective than the actual demonstration, for the following reaons:

When using the actual demonstration, be prepared to move the slide around to watch different crystals as they grow. Tell the students simply to watch, and you will comment on what they observed after the demonstration is over. When using the video, let it run through one time, then ask for comments or questions and go back in the footage to repeat segments that best help to answer the questions.

Ideas for discussing the crystallization demonstration in class

After doing the demonstration, it is helpful to guide the students in a discussion (or lecture) to explain what happened and to relate the demonstration to geologic processes. Ideas that can be discussed in a post-demonstration debriefing, including the ways in which minerals form by crystallization and the differences between minerals that cool rapidly and slowly, are summarized in Follow-up discussion topics.

NASA Quest Observation of Crystal Growth is a complete exercise using salicylate and other substances to observe and study crystal nucleation and growth. This site contains sample exercise sheets to accompany the experiments.