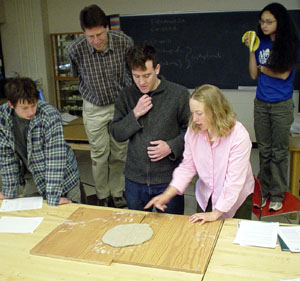 Assigning roles to students is one way to encourage positive interdependence, interaction, and group processing, which are among the five key elements of working in groups. Usually roles are responsibilities on top of the project itself. Choose roles that will help students overcome communication difficulties to get the project done and done well. Common problems for students facing group projects include:

Sometimes, it is a good idea to pick formal roles and to give them to the students; at others, it is best to give students a list of suggested roles and let them sort out their group's internal dynamics themselves. One thing you will want to do is make sure that the roles rotate among the group members. You might want to randomly assign the roles to group members or randomly determine an order for students to pick their role for the activity. This kind of randomization will help avoid rigid group structures and expectation effects. It also allows different individuals to develop and utilize different competencies. Random procedures also combat potential prejudices associated with roles - for example, teachers want to avoid allowing males to serve as leaders, while females serve as the "secretaries." Finally, random procedures also create a non-threatening means for students to share personal information and to develop closer relationships.

Appropriate roles will depend on group size and the nature of the cooperative learning task. The lists of roles described below are intended to be representative but not exhaustive.