These student materials complement the Changing Biosphere Instructor Materials. If you would like your students to have access to the student materials, we suggest you either point them at the Student Version which omits the framing pages with information designed for faculty (and this box). Or you can download these pages in several formats that you can include in your course website or local Learning Managment System. Learn more about using, modifying, and sharing InTeGrate teaching materials.

The Biodiversity Crisis -- Are Humans Causing a Sixth Mass Extinction?

Industrial development and population growth have driven our species to exploit ever more of the planet's resources. As a result, human activities are having a profound impact on Earth's biodiversity. Biological diversity, or biodiversity, refers to the variety of life on Earth. 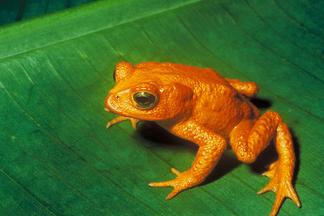 ×
The golden toad of Costa Rica was last seen in 1989 and is believed to be extinct.

Provenance: From Wikimedia Commons. By Charles H. Smith, vergrößert von Aglarech derivative work: Purpy Pupple [Public domain]
Reuse: This item is in the public domain and maybe reused freely without restriction.
Biodiversity is characterized in many different ways including: the number of species on Earth or within an area (species diversity), the genetic variation within a species (genetic diversity), and the different habitats available (ecosystem diversity).

In the last 500 years, since the time of European exploration and colonization of the Americas and Caribbean by Columbus and others, humans have been responsible for the extinction of more than 800 species of animals and plants. Nearly 17,000 more are known to be threatened with extinction. Examples of recent human-caused extinctions include the dodo, golden toad, great auk, passenger pigeon, Pyrenean ibex, St. Helena Olive, Steller's sea cow, Tasmanian tiger, and Yangtze River dolphin. The number and pace of recent extinctions have led some scientists to call this a biodiversity crisis comparable to past mass extinction events like the one that killed off dinosaurs 65 million years ago. This current biodiversity crisis is often called "the sixth mass extinction." 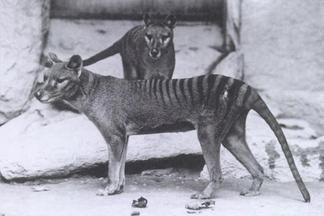 ×
The Tasmanian tiger, or Thylacine, was found in Australia (including the island of Tasmania) and New Guinea before its extinction in the 1930s.

Provenance: Baker; E.J. Keller. Report of the Smithsonian Institution. 1904. [Public domain], via Wikimedia Commons
Reuse: This item is in the public domain and maybe reused freely without restriction.

Species extinctions are only one of many ways that a biodiversity crisis can be characterized. Human activities have also led to changes in where species are found (range shifts), changes in the composition of ecological communities, and changes in the timing of life events like flowering, breeding, and migration. Furthermore, these changes impact the ways species interact with each other and their environment (ecosystem processes) by changing primary productivity, decomposition rates, and nutrient cycling. Ecosystem services that benefit humans such as regulation of the water cycle, water quality, climate regulation, pest control, and pollination are also affected. Ultimately, dramatic changes in ecosystems caused by the loss of biodiversity create a positive feedback cycle, further changing the ecosystems and increasing the risk of additional extinctions.

What can the Geologic Record tell us about Mass Extinctions?

The fossil record documents huge changes in life on our planet, including the evolution and extinction of species. These events, in turn, provide critical context for evaluating the impact of humans on biodiversity. All species eventually go extinct. Of the approximately four billion species that have lived on this planet, about 99% are now extinct. Extinctions are normally balanced by the appearance of new species via evolution. Extinction rates, however, have not been consistent throughout the history of life on Earth and at times have risen much higher than normal. The number of mass extinctions in the fossil record depends on the quantity and quality of fossil data available to paleontologists and their standards for what constitutes an unusually high extinction rate.

The five most severe mass extinctions in the fossil record include:

Different factors are thought to have caused these mass extinctions including asteroid impacts, volcanism, changing climate, sea level fluctuations, and shifts in atmospheric and oceanic chemistry. Many of the proposed causes are interrelated because a change in one of Earth's systems often leads to changes in additional systems. For example, increased volcanism adds the greenhouse gas carbon dioxide (CO2) to the atmosphere, which can in turn lead to climatic changes, higher sea levels, changes in ocean pH, and increased weathering rates. Interacting stressors and feedbacks may amplify the magnitude of an extinction event, leading to dramatic losses in biodiversity across many different groups of organisms.

What is Causing the Current Extinctions?

Unlike past mass extinctions, the current extinctions are being caused by human activities. Human impacts on biodiversity stem from overhunting and overfishing, habitat loss and degradation, climate change, and the facilitation of species invasions.

Starting about 50,000 years ago, humans began playing a role in extinctions though overhunting as our species spread to new areas of the globe. Whenever humans arrived on a new continent or island, the extinction of large (>45 kg) vertebrate species, known as megafauna, followed within several thousand years.

More recently, habitat loss has become the biggest threat to biodiversity. As humans change any natural habitat to meet our needs (agriculture, raising livestock, harvesting timber, building roads and cities, etc.), we negatively impact diverse groups of species that depend on those habitats. For example, when habitat is converted to agriculture or pasture or suburbs, some species may increase in abundance (such as crops or weedy species that respond to disturbed soils), while others will decline or even go extinct3.

Even where natural habitat remains, it may be fragmented into smaller patches that cannot support as many species. Remaining patches not only contain few resources, but are surrounded by other types of habitat, making it difficult or impossible for species to migrate to other areas. Fragmented habitats also have more edge areas with different microclimates. For example, the edges of forested fragments tend to be drier, windier, and receive more sunlight than areas in the center.

Climate change may overtake habitat loss as the biggest threat to biodiversity over the next few decades. Increased concentrations of carbon dioxide, methane, and other greenhouse gases in the atmosphere from fossil fuel burning are causing rapid changes in climate. These climatic changes are in turn impacting biodiversity by causing rapid changes (physical and biological) to habitats. 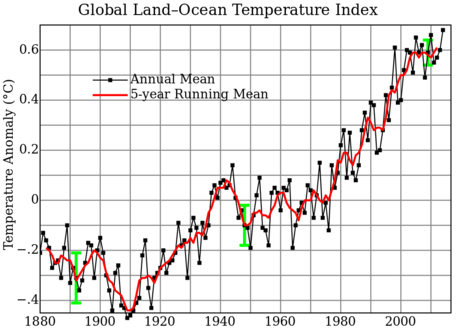 Provenance: By NASA Goddard Institute for Space Studies (http://data.giss.nasa.gov/gistemp/graphs/ ) [Public domain], via Wikimedia Commons
Reuse: This item is in the public domain and maybe reused freely without restriction.

The global average of combined land and ocean surface temperatures increased 0.85°C between 1880 and 2012, and each of the most recent three decades registered successively warmer temperatures than any prior decade since 18504. Unlike temperature increases, precipitation changes are spatially variable, with some areas seeing increases and others decreases. Extreme events such as heat waves, floods, storms, and droughts are increasing due to climate change and threaten biodiversity further. Oceans are affected by sea level rise and the uptake of CO2, which has led to a 26% increase in ocean acidity4. Species that cannot either tolerate the new climatic conditions, shift their ranges, or adapt their physiology or behavior are most at risk for extinction due to these climate changes.

As humanity has become more mobile, we have often introduced (accidentally or intentionally) exotic species to new locales. If these species are able to spread beyond their sites of introduction across the landscape, we call them invasive species. Invasive species may out-compete or prey on native species, leading to decreased abundance of native species. Invasive plants frequently become dominant species, which in turn may alter ecological community composition and structure, nutrient cycles, and fire regimes. In addition to introducing plants and animals, humans introduce diseases for which native species may have no immunity. Examples include avian malaria, which has led to the extinction of multiple native birds in Hawaii, and the fungal pathogen chytridiomycosis that is lethal to many amphibians and is spreading in the Americas.

Frequently, species are subject to more than one of the above stressors, which often interact in complex ways that we are only beginning to understand. For example, fragmented habitats make it more difficult for species to migrate in response to climate change and also have more edge habitat where weedy and/or invasive species are likely to be found. Because many of the individual stressors are expected to intensify in the future, interactions and feedbacks among these drivers are likely to increase future extinctions without efforts to relieve the pressures on species.

So, Are We in the Midst of a Sixth Mass Extinction?

Determining whether we are in fact in the midst of a sixth extinction is a difficult task due to the incomplete nature of both the fossil and modern data. The fossil record is patchy because only some species with hard parts that fossilize well are preserved to tell us about past extinction trends. For modern species, we do not even know how many species exist. Scientists have identified and named around 1.8 million species, a small fraction of the estimated 5 to 15 million on the planet.

Despite these limitations, efforts have been made to compare past extinctions to today's using various methods such as comparing current extinction rates to either background or mass extinction rates from the fossil record, assessing percentages of species lost today for well-studied groups, or modeling techniques based on biological relationships between species numbers and area or long-term extinction trends in well-known groups1.

Extinction rates are based on the number of extinctions divided by the time period over which they occurred. Extinction magnitudes are based on the percentage of known taxa that have gone extinct. Although calculations vary, there is wide agreement that extinction rates and magnitudes are higher than should be expected from the fossil record, including a recent estimate that the current extinction rate is up to 1000 times the background rate5. Even a conservative rate for vertebrate species loss over the last century is up to 100 times higher than the fossil record2. Calculations also suggest that although we may not be there yet, if rates increased to the point at which all threatened species became extinct within the century, we would reach a sixth mass extinction event with a magnitude comparable to past mass extinctions within ~240 to 540 years1.

Although it is already too late for some species, the path forward depends on efforts by humans to reduce pressures on species. This will require increased scientific understanding of our species' impacts on biodiversity, informed citizens, and creative efforts aimed at conservation and reducing activities that threaten biodiversity.