Another environmental concern regarding shale gas development is induced seismicity. In this section of the module, you will learn how to tell if a seismic event in Pennsylvania is caused by mining activity, or if it is a natural earthquake or one induced by oil and gas activity. The exercises will help you understand what is done after detecting and locating a new seismic event to determine the cause of the seismic event.

Students will be asked to think critically, analyze data, and synthesize information
Student will learn how disposed brine might impact the environmental regarding seismicity

Students will learn how to use Google Earth

Seismic events in Pennsylvania have three main sources. Natural earthquakes occur in many areas of the state, and if they are large enough, they can be detected by seismometers – instruments that detect earth shaking. Blasting in mines and quarries can also cause ground shaking that is similar to the ground shaking from an earthquake. And, in addition, some earthquakes might occur that are caused by hydraulic fracking or from the injection of waste fluids into deep storage wells. These earthquakes are known as induced earthquakes. A combination of factors is needed to induce earthquakes. These include the rate and total volume of water injected, the presence of faults capable of shifting, stresses that are large enough to produce earthquakes, and pathways for the fluid pressure to travel from the injection point to the faults (https://earthquake.usgs.gov/research/induced).

Blasting events are fairly simple to distinguish from earthquakes. The United State's Geological Survey (USGS) lists several criteria that can be used to identify mining blasts from earthquakes (http://earthquake.usgs.gov/earthquakes/eqarchives/mineblast/evidence.php). These criteria include locations with respect to mines and quarries, time of the event (i.e., during working hours), characteristics of the recorded waves, and the extent to which people feel the event.

In contrast, induced earthquakes generate data that looks similar to natural earthquakes. To tell if an earthquake has been induced, we must look at where the earthquake occurred with respect to fracking and wastewater disposal wells and also its timing.

This module enables participants to investigate the different types of seismic events experienced in Pennsylvania. Figures illustrating the waveform (seismogram) differences between blasting events and earthquakes can be seen below (Figures 1 and 2). Of particular interest is a higher-amplitude lower-frequency wave that is often generated by blasting in coalmines and quarries. The higher-amplitude lower-frequency wave, the time of the event, and the location of the event with respect to nearby mines are the most important factors that can be used to determine if an event is caused by a blast. 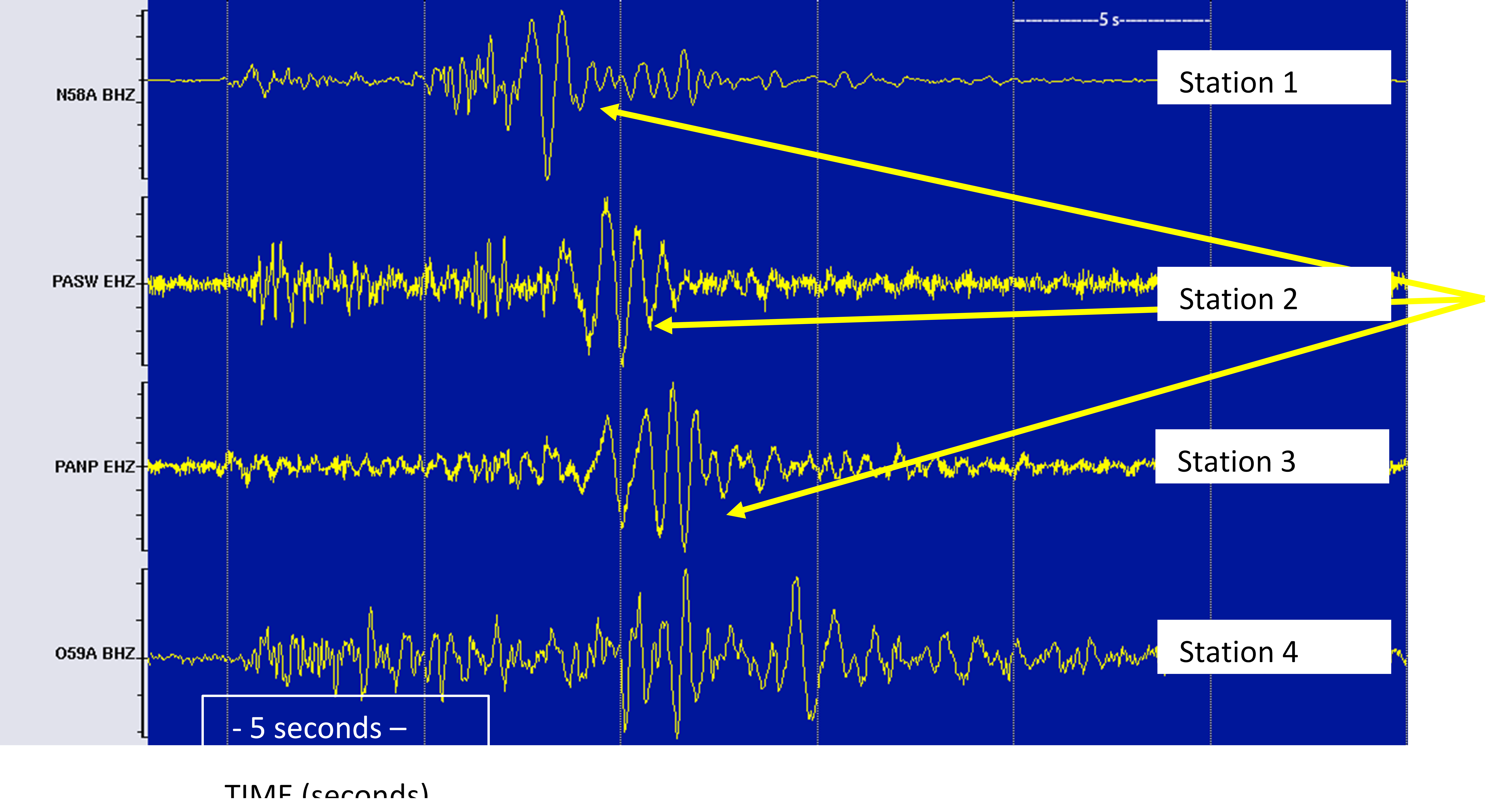 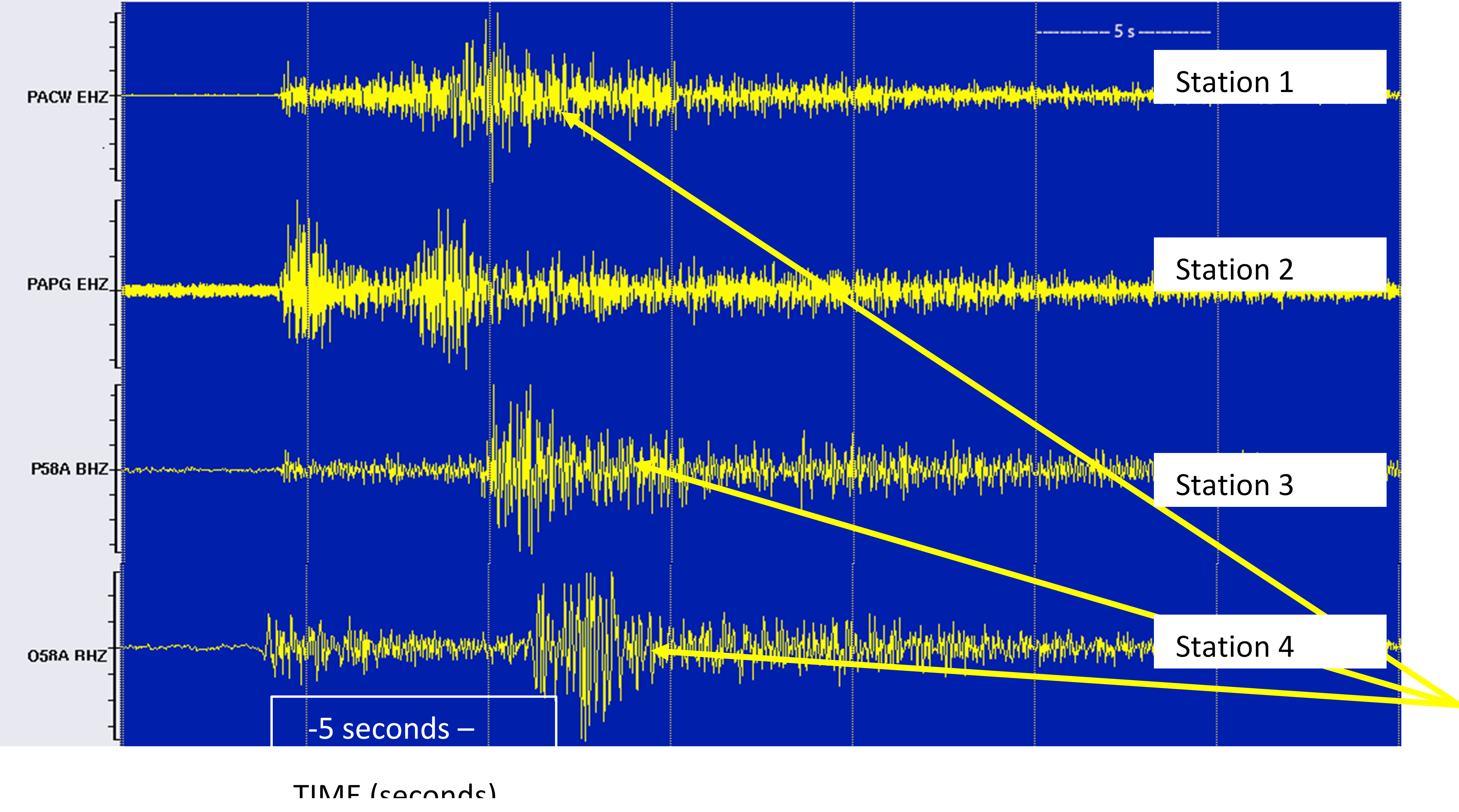 Figure 2: Selected seismograms illustrating an earthquake. Seismograms are from four stations near the event and filtered from 1-10 Hz. Note the higher-amplitude higher-frequency signal marked with arrows characteristic of an earthquake.

In the next 3 exercises, you will first examine data from a mine blast and then analyze data from two seismic events to determine if they are mine blasts or earthquakes. The data come from a study of seismicity in Pennsylvania conducted between 2013 and 2015 by The Pennsylvania State University and the PA Department of Conservation and Natural Resources (DCNR).

Exercise I: Thomas Mine cluster:

Click on the link highlighted below. When the dialog pop ups asking to save or open the file press 'open'. This should open the file in Google Earth. 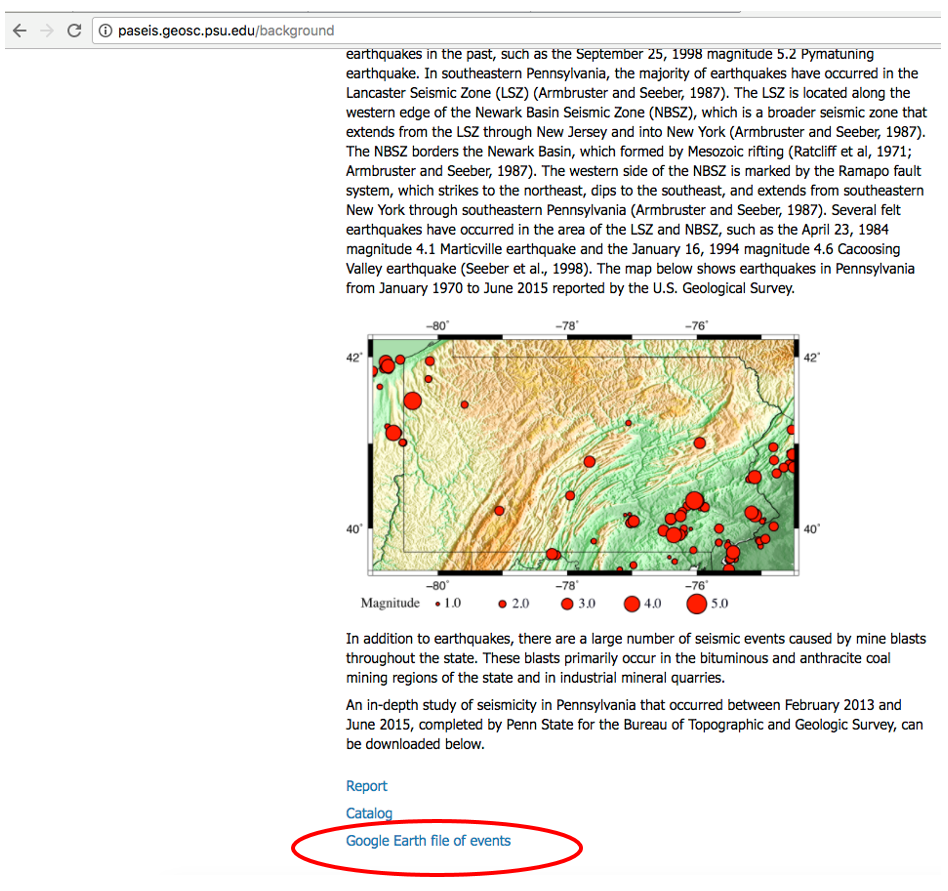 Figure 3: Screen shot of webpage that shows where to get the kmz file

This file shows locations of seismic events recorded between February 2013 and June 2015. Feel free to look around the events. Clicking on an event's marker (red circle) will pop up a window with event information, including date, time, magnitude, number of recording stations, and some information about the uncertainty in the location. You can move around the map by using the left mouse button and you can zoom in or out using the scroll wheel on the mouse. Alternatively, you can use the controls on the right side of Google Earth. 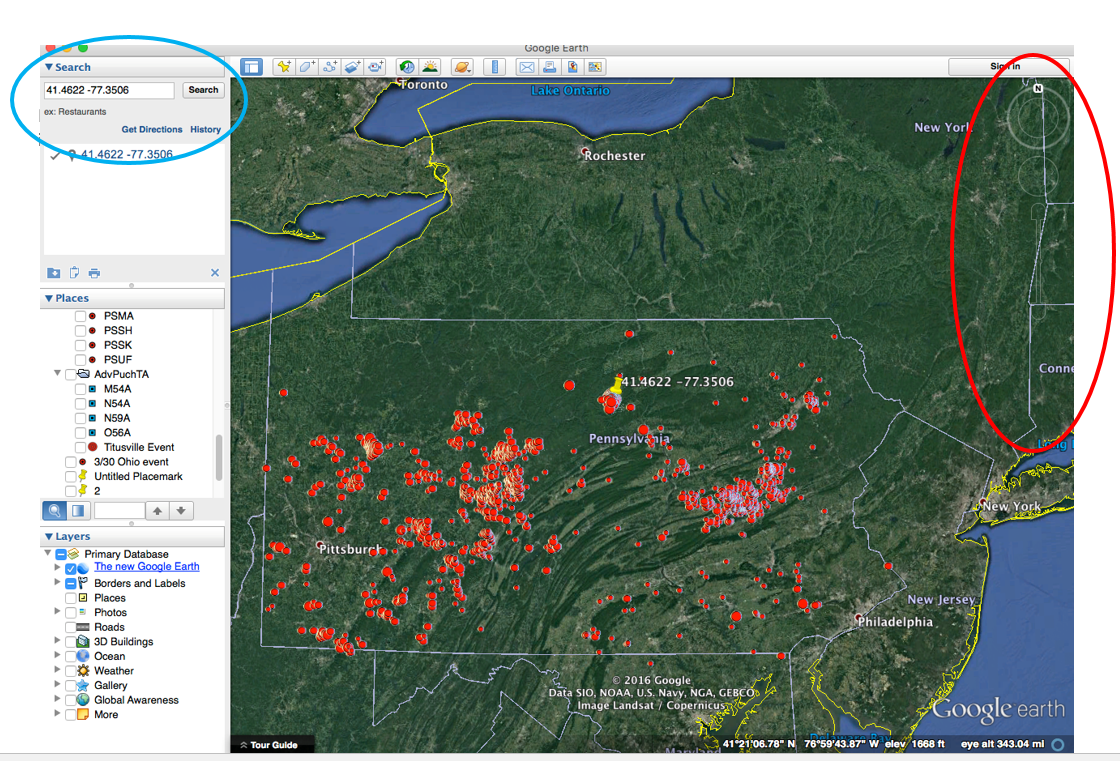 Use the search box in Google Earth to zoom (use the scroll wheel or the navigation menu to zoom) in to the following coordinates.

You will be able to see the Thomas Coal Mine in the satellite imagery. There is a cluster of seismic events in the general area of the mine. These events were fairly simple to distinguish as blasting events due to the proximity to the mine and the waveform characteristics of the events. In addition, most of the events in this cluster occurred between 14:00 and 20:00 UTC time (9am – 3pm EST). You can click the markers on the map to see the time of events, magnitude, etc (Figure 5). Some of the seismograms from one of the events are illustrated below (Figure 6). Notice the higher-amplitude lower-frequency waves and similarity to the blasting waveforms shown in Figure 1. . You may also notice that many of the events do not fall directly on the mine in the imagery. This is due to uncertainty in the seismic event location. 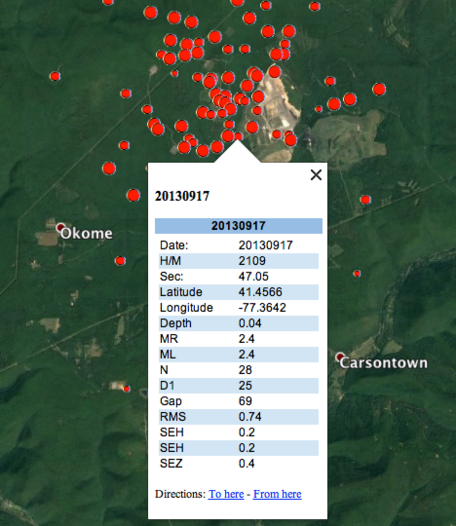 Provenance: Tao Wen, Syracuse University
Reuse: This item is offered under a Creative Commons Attribution-NonCommercial-ShareAlike license http://creativecommons.org/licenses/by-nc-sa/3.0/ You may reuse this item for non-commercial purposes as long as you provide attribution and offer any derivative works under a similar license.

Note: This pop-up shows a lot of information related to the seismic event. Of particular importance in this module are the following:

Latitude: The latitude of the location in degrees

Longitude: The longitude of the location in degrees

Depth: The depth of the event in kilometers

ML: Magnitude of the event


Note: Magnitude is a measure of the seismic event size. There are many types of magnitude scales. It is most common to use the Local magnitude (ML) scale for small events with magnitudes less than about 4. 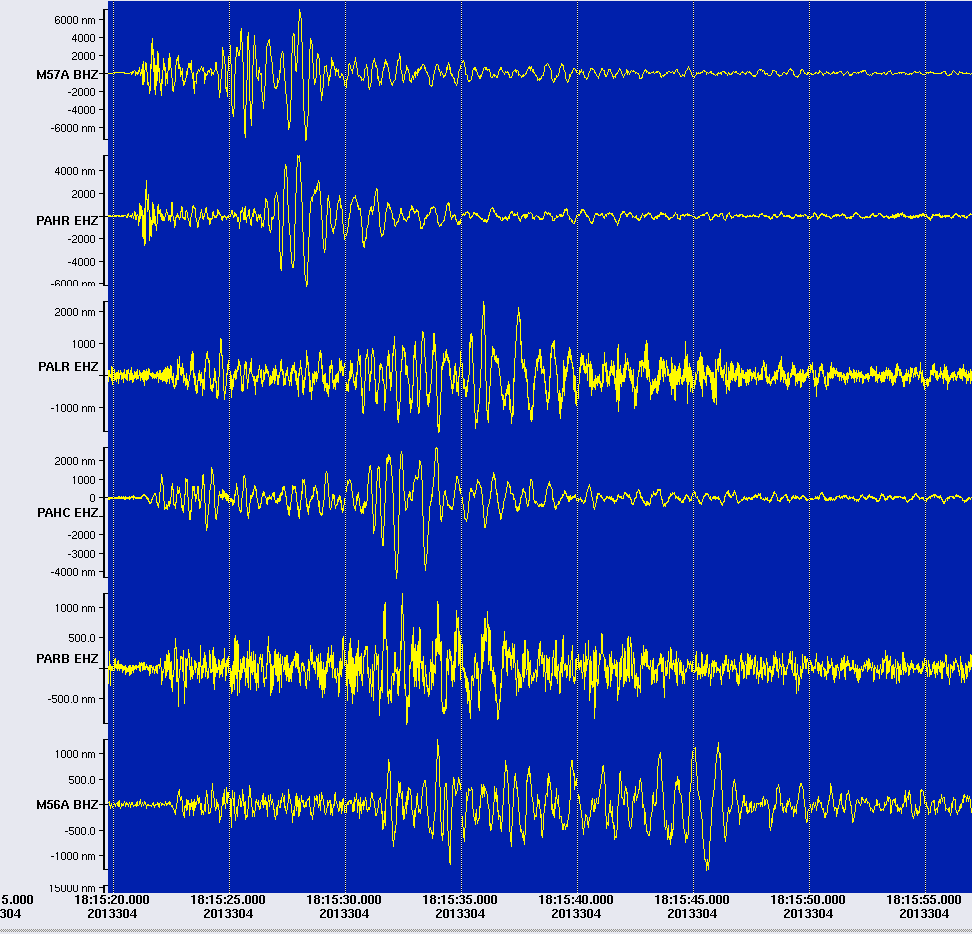 Figure 6: October 31, 2013 magnitude 2.45 event from the Williamsport cluster. Seismograms are shown from the six nearest stations. 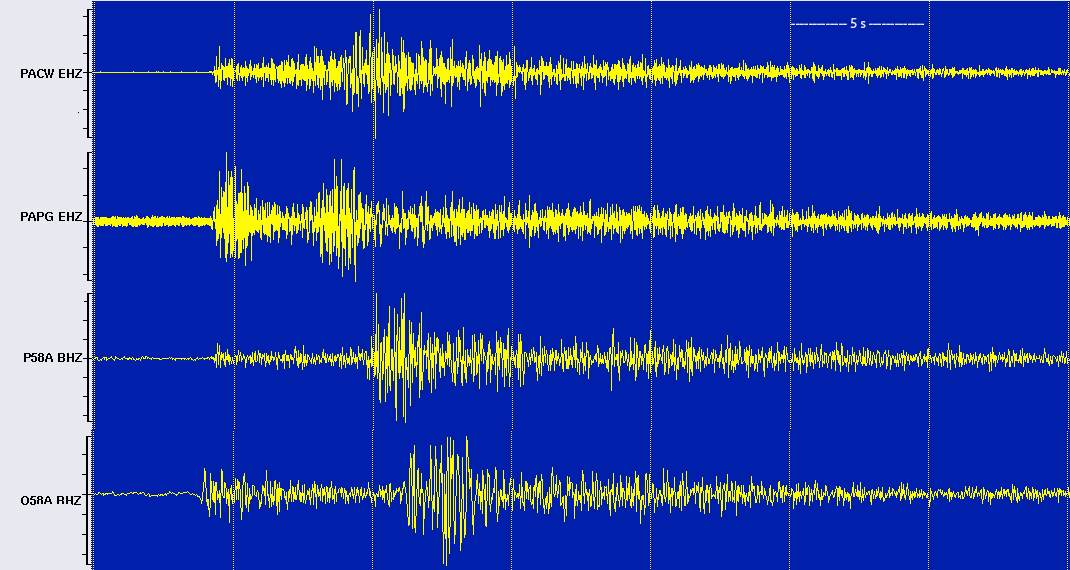 Examine the selected waveforms above and the area around the event in Google Earth. Do you think this event is an earthquake or a blast?

Zoom to the event using Google Earth. Do you see any mines nearby (i.e, within 5-7 km)? You can use the ruler tool in Google Earth to find distances. To use the ruler tool, click the icon near the top center of the window. This will open the ruler box. Be sure the 'line' tab is highlighted and change the units of 'map length' to 'kilometers'. You can then move the cursor to the event and click once to establish a starting point. Now when you move the mouse a line will be drawn and the ruler dialog box will display the distance. Zoom or pan the map view as needed to see the surrounding area. 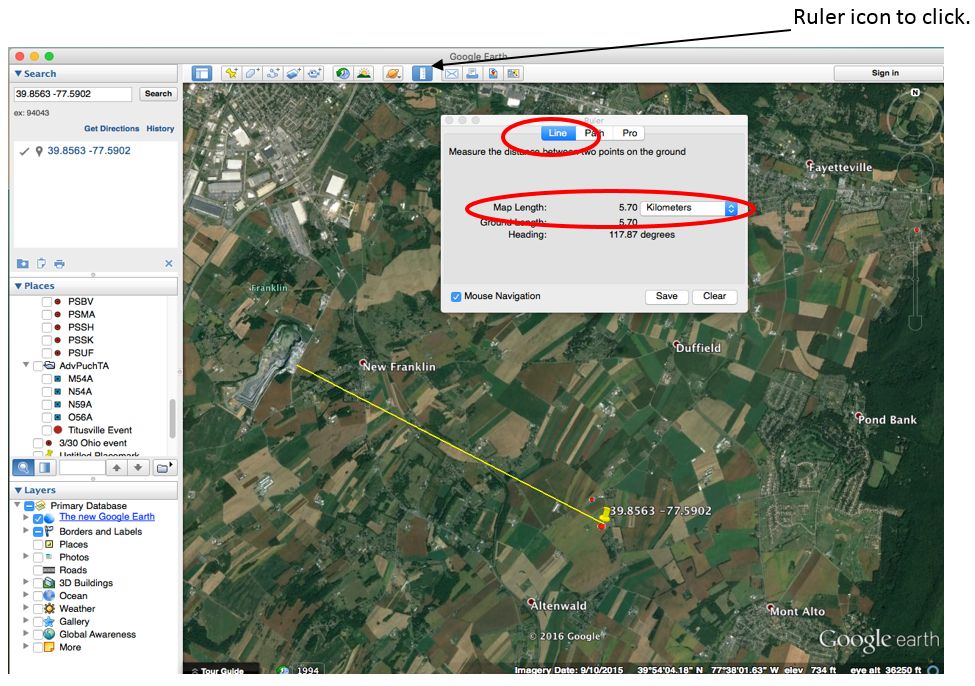 Use the information outlined above to determine whether this event is an earthquake or a mine blast. 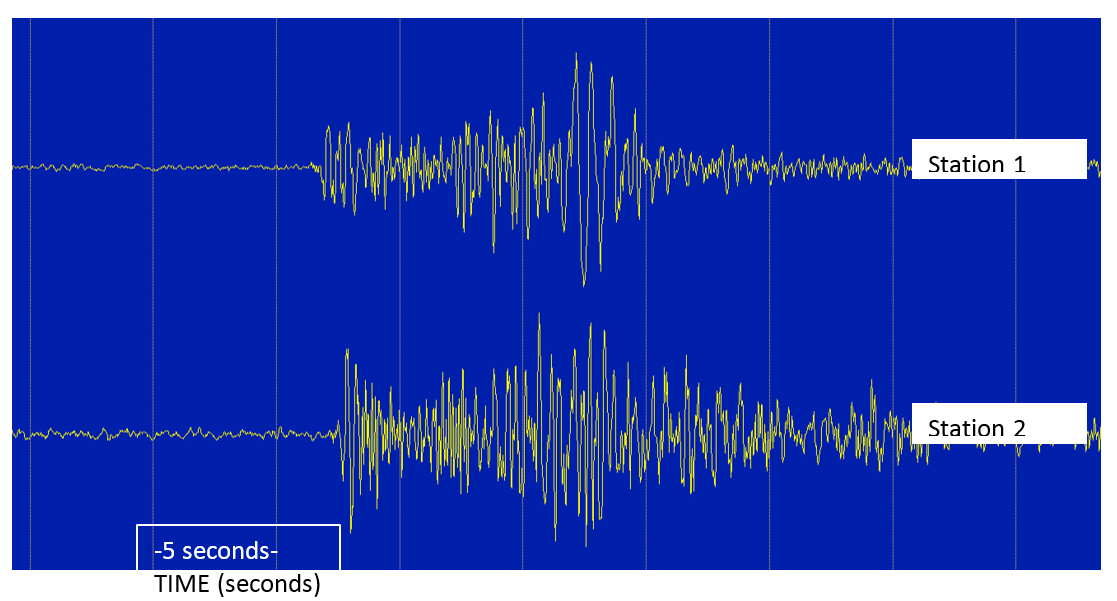 Are there any mines nearby? What time was the event? Does the signal more closely resemble that of a blast or an earthquake (as shown above in Figure 1)?

Answer: This event occurred at 10:18 am EST, is located near a mine, and has waveforms that closely resemble the blasting waveforms shown in Figure 1. This event is most likely a blast.

Additional information about seismicity in Pennsylvania:

1,544 seismic events are shown on the Google Earth map that occurred between February 2013 and June 2015. 1,530 of these events were determined to be related to mining activity. The remaining 14 events were carefully analyzed to determine if any of them were the result of gas drilling or wastewater disposal activity. There are about 6 or 7 wastewater disposal wells in the state. Two new disposal wells were recently permitted, and several others are in the review process. It was determined that none of the 14 non-mining events were related to gas drilling activity or wastewater disposal. Therefore, it was concluded that they were all natural earthquakes. A report on seismicity in Pennsylvania during the February 2013 to June 2015 period can be downloaded from:

In August 2016 construction of a network (PASEIS) of 30 seismic stations for monitoring seismicity in Pennsylvania was completed. The network was funded by DCNR and DEP and is operated by Penn State. Seismicity is routinely monitored using data from this network and several other seismic stations in Pennsylvania operated by other organizations. The event information is posted on the PASEIS website: