Errors in Spatial Thinking: When students go wrong, what are they thinking and how can we help them?

Over the years, we've each observed students make a wide variety of interesting mistakes in spatial thinking. In some cases, it's easy to understand how they arrive at their misunderstanding. In other cases, their errors are perplexing, especially at first glance. 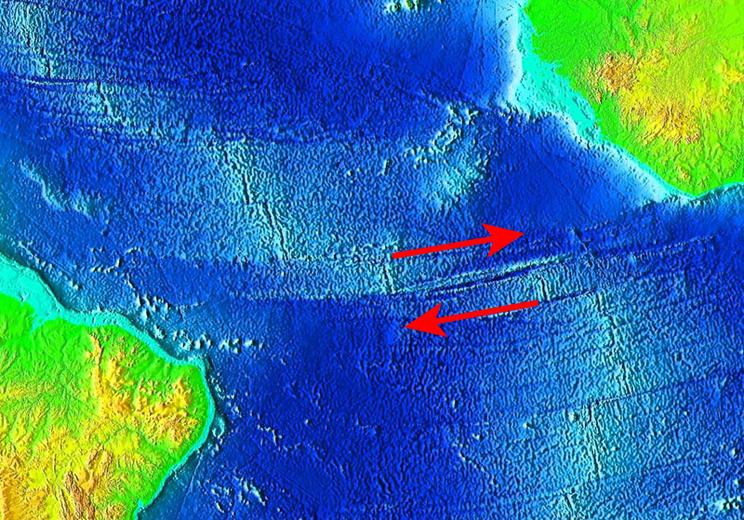 ×
Figure 1. Portion of the Mid-Atlantic Ridge system, with red arrows showing the relative motion of the tectonic plates. Because both plates are moving away from the mid-ocean ridge, the transform fault segment between the arrows is a right-lateral fault. However, if one were to interpret this fault segment as offsetting a pre-existing feature, it would appear to be left-lateral.

Some spatial thinking errors are the result of spatial patterns that are visually misleading. For example (Figure 1), the apparent offset of mid-ocean ridges along transform faults can lead a novice to an incorrect inference about the relative motion of the tectonic plates adjacent to the faults. The misconception may rest on an implicit assumption that the offset ridges were once aligned and did not form in an offset position. Such an implicit assumption suggests that common orientation is sufficient to visually group the offset ridges and the grouping may in turn lead to the inference that the unit was originally formed as single line and subsequently broken into two. This interpretation is consistent with experience with common objects. 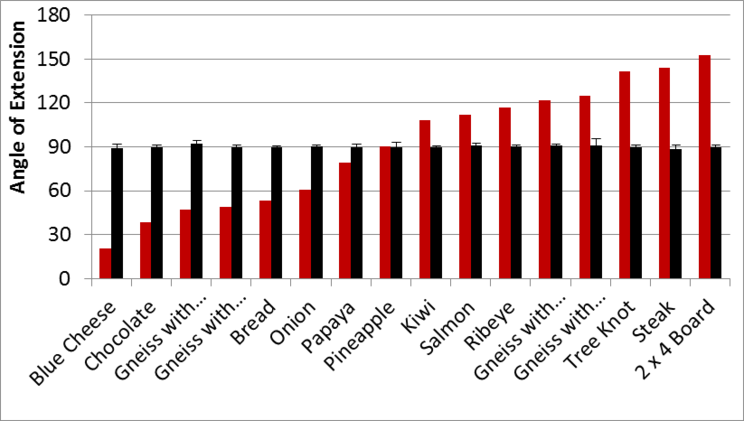 Another set of spatial thinking errors arise from the assumption that surface features go straight into solid objects. We know, both from personal experiences and from controlled laboratory experiments, that novices make this assumption even in cases where they are likely to have seen examples that contradict it (Figure 2). Carol suspects that people make this assumption simply because it is cognitively much easier than visualizing other possibilities. That is, if surface features go straight in, we don't have to visualize 3D structures at all; they look just like what we see on the surface. Tim offers the hypothesis that this error reflects a visual process that normally serves to visually bind surfaces with differing orientation into a single object. This visual process then makes a systematic error when confronted with separate objects embedded in opaque objects.

×
Figure 3. Example item from the Geologic Block Cross-sectioning Test. Seventeen percent of undergraduate geology students chose "B" on this item (N = 71). This answer is intended to be an attractive foil to people who see the patterns on the block as "wrapping paper."

While this may seem incredible to those of us who routinely visualize complex 3D patterns or structures, we know that this student is not alone. Kali and Orion, in their study of Israeli high school students' understanding of geological diagrams (1996), identified some errors as evidence of "non-penetrative" thinking. We have seen small, but significant, numbers of U.S. college undergraduates make the same kinds of errors on our Geologic Block Cross-sectioning Test (Figure 3). These errors suggest that the students see the patterns in these diagrams of 3D blocks as "wrapping paper," rather than as indicators of 3D structures. Further evidence for this interpretation is when students only put color on the surface outline of a cross section, as if the Earth was literally an empty box.

Addressing these errors in our teaching

Each of these errors is revealing to the cognitive scientist seeking to understand how the mind makes sense of the world, and represents a significant challenge for the educator. How we go about helping our students to understand and correct their errors in spatial thinking depends on what kinds of errors they are making. In the case of misinterpreting the apparent offset of mid-ocean ridges along transform faults, for example, the solution is to help the student to understand how mid-oceanic spreading centers and transform faults develop. In particular, spreading centers and transform faults develop coevally, rather than sequentially. If students are thinking penetratively, but making incorrect assumptions when they do so – for example, that surface features go straight in – it is likely to be helpful to show them multiple examples that contradict those assumptions, while addressing their assumptions explicitly. If so, perhaps these students could be helped by a simple rule: "Slow down and find more information about three-dimensional orientation (Implicit: do not try to estimate three-dimensional structures by looking solely at a two-dimensional view)". If students are making non-penetrative thinking errors, it may be necessary to teach them, explicitly, about how 3D objects are represented in 2D diagrams. This approach, however, requires teaching that emphasizes the three-dimensionality of objects, including the surface of the Earth, (volume-based thinking) wherein map and cross-section views are simply "cuts" through that volume. We do not, at present, teach geology classes in this manner.

We would like to invite our readers to contribute their own most common spatial thinking errors in the classroom. What methods have you used to help address these errors?


Comment? Start the discussion about Errors in Spatial Thinking: When students go wrong, what are they thinking and how can we help them?