Linking Time and Space in Geology: The Sedimentary Processes of Transgression and Regression

In geology, space and time are inexorably linked (Kastens & Manduca, 2012; Manduca & Kastens, 2012). The relationship of rock layers vertically and laterally is indicative of large-scale changes in the environment. An outcrop consisting of several horizontal sedimentary rock layers represent a vertical time-series of geologic events. The textures of each sedimentary layer tells us the environment that was present at that location when the layer formed. Geologists use these textures to define the rock layer as a facies. If the environment changes, a new layer of sediment possessing a different texture will be laid on top of the existing layer. Through this process a set of facies tells us a historical record of environmental changes. 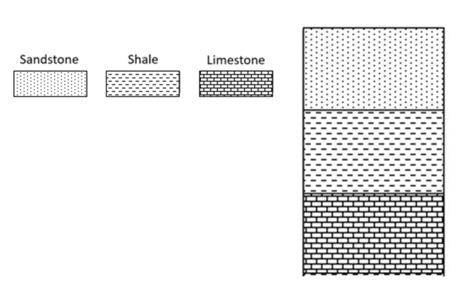 ×
Figure 1. A sedimentary outcrop consisting of limestone, shale and sandstone indicates that sea level was falling at this particular location while the sediments were being deposited.
For example, Figure 1 shows a sequence of limestone, shale, and sandstone. Limestone forms in a deep marine environment from precipitation of calcium carbonate. Shale is made of fine clay particles, and therefore indicates deposition in relatively still water. In contrast, sandstone is made of slightly larger grains and therefore deposition of sand can happen in water that is moving slowly. It is common to see sandstone in a beach environment, where the waves and tides move sand back and forth over time. What can we say about sea level change when we find an outcrop with the sequence of rocks in Figure 1? If the lowest (and oldest) layer has a texture implying deposition in deep water and the highest (and youngest) layer has a texture implying deposition in shallow water, we might infer that this sequence of rocks shows a lowering of sea level of over time. This example demonstrates how the vertical position of sedimentary rocks indicate global environmental changes.

The lateral position of sedimentary rocks relative to one another can also indicate global environmental changes. Figure 2 shows the lateral position of a typical depositional marine environment. This two-dimensional diagram is a simplified depiction of the position of sea level and the depositional facies associated with various water depth environments. What would happen if sea level were to rise? We would see the sandstone shift to the left as the water gets deeper and floods the shore. The deepening water will lead an overall shift in the facies to the left, such that the limestone will progressively be deposited on top of the existing shale rock and the shale facies will be deposited on top of the existing sandstone rock. The lateral transition of sedimentary facies over time helps geologists build meaning from vertical outcroppings of sedimentary rock and reconstruct the regional and global geologic processes of Earth's past. It is through this process of observation and inference about geologic objects and process that time and space become integrated in geology.

Geologist interpret these geological changes in sea level on a variety of scales to help interpret the whole large-scale changes that have been observed throughout geologic history. Geologist start with first understanding the small-scale aspects of one rock type. To do this, hand samples (samples of the rock layer that are small enough to be held in one's hand) are used. Here geologists make interpretations about the individual grains such as size, mineral composition, and shape (Heinz and Aigner, 2003). These characteristics are unique to specific environments and can inform on transport processes that brought the grains to those environments.

Regionally, geologists look at outcrops (areas where the rock layers are exposed at the surface of the earth) and core samples (drilled samples that represent large vertical extensions of rock layers) to understand the regional scale associations between rock layers. At this scale geologists can interpret single to multiple periods of sea level rise and fall. Aspects of the rock such as the rock type, the position of sedimentary structures, and sequencing of the rocks tell geologists about overall changes in the environment in an area (Heinz and Aigner, 2003).

Geologists can also look at sea level changes on a global scale. To do this, geologists look at major tectonic changes in the world. Opening and closing of geologic basins and the orientation of the continents can cause rocks that typically form in a tropical environment to be found at the top of mountains. These sedimentary relationships build connections between lateral plate motion and vertical tectonic uplift or subsidence. From these spatial relationships, geologist can interpret global changes in sedimentary environments.

When geologists and their students look at an outcrop, they may have substantial differences in their assumptions about the relationship between the rocks and the time they represent. Experts may have a sense that a conglomerate, or sedimentary rock of mixed size grains, may be deposited during a geologically-instantaneous flooding event, while a shale, composed of clay particles, may take thousands of years to accumulate in a quiet lagoon environment. In contrast, their students may assume that the rocks in the idealized outcrop of Figure 1 took an equal amount of time to form because they are the same thickness (Cheek, 2013). It appears this conceptual understanding can be improved with a targeted intervention (Cheek, 2013), but students struggle to understand the time scale on which many geologic events occur.

Drawing from Montagnero's (1996) model of diachronic thinking, Dodick and Orion (2003) discuss how students must engage in Temporal Organization to put geologic strata in order, then build Interstate Linkages to relate geologic strata based on cause and effect. Finally, all of the information must be integrated in Dynamic Synthesis which links the pieces as a whole process of change. This model is useful for thinking about how students build a systems-level conceptions of depositional processes. Yet, students' mental models will likely be fraught with errors in temporal reasoning if they do not understand depositional rates. Further, this type of thinking does not take into account other spatial errors associated with the integration of space and time required to understand depositional systems. 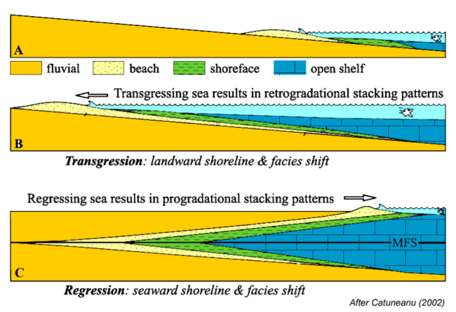 ×
Figure 3. Transgression and regression, as depicted in most lower level textbooks, represent sedimentary deposition as a process where time may be drawn as a horizontal line across the diagram. This diagram assumes that there is an endless, continuous sediment source concurrent with changing sea level. (Catuneanu, 2002).

As students progress to higher level geology tasks, it becomes increasingly important that they are able to integrate temporal and spatial components of a problem. Early on, these tasks relate to integrating a process with an outcrop (Figure 1 and 2). In advanced undergraduate and graduate coursework, students are introduced to sequence stratigraphy. This may be their first real geologic example where the simple stratigraphic rules, or Steno's Laws, become more nuanced. Steno's Law of Original Horizontality posits that sediments are typically deposited into flat layers. For example, in Figure 3, sea level transgression (or rise) and regression (or fall) will lead to a shift in sedimentary facies onshore and offshore. But this diagram is a bit mis-leading because it assumes that there's an endless sediment supply coming into the basin from the continent, which is typically not the case. More commonly, the sediment source fluctuates as relative sea level fluctuates, at times sediment supply out paces sea level rise and vice versa (Figure 4a). The depositional basin will fill with sediments and the shoreline will migrate. 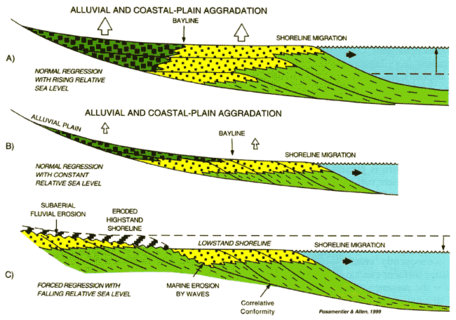 ×
Figure 4. Deposition in a marine environment typically displays more complex geometry, like that depicted here, where the sedimentary base either (a) fills as sea level rises, (b) fills as sea level remains the same, or (c) shifts as sea level falls. (Mitchum, 1977)
As a result, the geometry becomes quiet complex as there are several variables interacting (i.e. relative sea level, sediment source, subsidence and uplift). The important point is that in Figure 4, a horizontal line does not accurately represent time. Instead a chronostratigraphic (equal time line) would be curved following the sedimentary layers as they are draped on top of one another. At this new level of complexity, students must be able to decipher time and space simultaneously because the simplistic rules (Steno's laws) do not apply quite the way they were led to believe in their earlier coursework.

In summary, how do we help students with this complex linking of time and space? Where should it be introduced in a typical undergraduate or graduate geology curriculum? Will students' spatial ability be a hindrance when it comes time to decipher sequence stratigraphy? Are there other cognitive processes at play when people deal with complex spatial information? Post a comment and let us know your thoughts.

Cheek, K. A. (2013). How geoscience novices reason about temporal duration: the role of spatial thinking and large numbers. Journal of Geoscience Education, 61(3), 334-348.

Linking Time and Space in Geology: The Sedimentary Processes of Transgression and Regression -- Discussion