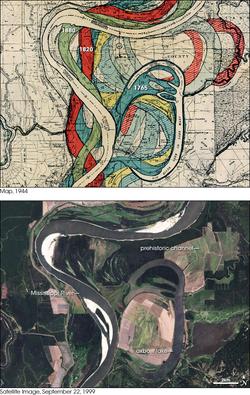 Hide
(Top) Area just north of the Atchafalaya River showing the modern Mississippi River course superimposed on channels from 1880 (green), 1820 (red), and 1765 (blue). (Bottom) A satellite image from 1999 shows the current course of the river and the old oxbow lake. Image source: NASA
Rivers are dynamic, constantly changing over both space and time. Rivers also change the landscape through which they flow. Moving water erodes rock, soil, and vegetation, carries and deposits sediment, and carves out new channels and pathways through land. Changing rivers can impact land use, local ecology, industry, and quality of life. Maps like the one on the right, can tell stories of the rich and complex history of a river. Despite man-made changes to the landscape, glimpses of the past remain.

Scientists use a variety of techniques to monitor and map rivers from the air and space. You have already read about Zhong Lu's InSAR (Interferometric Synthetic Aperture Radar) technique for mapping land subsidence in the Mississippi delta. Wayne Wright, the lead investigator for NASA's Experimental Advanced Airborne Research Lidar (EAARL) project, and Asbury Sallenger, Jr. of the USGS, have been using a technique known as lidar (light detection and ranging), to study rivers. Lidar is similar to radar, but uses shorter wavelength electromagnetic radiation (ultraviolet, visible, and infrared) to trace out land (and water) topography. Although they have primarily used lidar for tracking coastal storm damage, Wright and Sallenger have proven that it can also be used to map river bottoms. Because EAARL is designed to measure all sorts of terrain and flies on a dedicated airplane, it is ready to go at almost any time, which makes it a valuable tool for studying changes that occur on shorter timescales.

Scientists have also begun mapping how underground reservoirs of fresh water are changing with time, by "weighing" Earth's fresh water from space. NASA's twin Gravity Recovery And Climate Experiment (GRACE) satellites respond to changes in Earth's gravitational field that signal shifts in the movement of water across and under Earth's surface. GRACE's technique is best suited for large areas and longer time intervals. According to NASA hydrologist Matt Rodell, "Water storage changes in the whole Mississippi River Basin, for example, should be no problem for GRACE. It's a large area, and there are large changes in water storage. The Salt Lake Basin, on the other hand, is too small and dry for GRACE to be able to detect changes in that region."

All of these techniques provide scientists with a better view of rivers and water storage that will help improve our ability to predict, plan for, and respond to routine changes in river flow and shape, as well as more extreme events, like floods and drought.