Week 1: From the Outside Looking In —
Changing Our Perspective of Earth 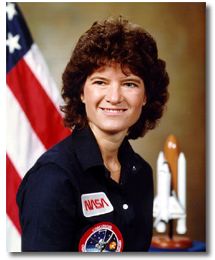 Image source: NASA
We all know Sally Ride as the first American woman in space. Dr. Ride found her way to NASA in 1978 by answering a newspaper advertisement seeking applicants for the space program. During her time at NASA, she was the ground-based Capsule Communicator for two shuttle missions before flying twice on board the Space Shuttle Challenger in 1983 and 1984. When the 1986 Challenger accident occurred, Ride headed the Operations subcommittee of the Presidential Commission investigating the tragedy.


Dr. Ride has been a professor of physics at the University of San Diego since 1989 as well as an active promoter of science education and outreach. In 1995, Ride initiated the KidSat program (now called EarthKAM (Earth Knowledge Acquired by Middle school students). This NASA education program enables students, teachers, and the public to learn about Earth from a space-based perspective, through images taken by middle school students operating a camera on board the International Space Station. Dr. Ride has also written five children's science books and is now president and CEO of her own company, Sally Ride Science which is dedicated to supporting kids' interests in science, math and technology, with a special focus on girls.


Though long retired from her career as a NASA astronaut, Dr. Ride continues to be passionate about science, education, and what people can learn about Earth by observing it from space. In this video, Astronaut Sally Ride on Our Changing Climate, she shares her thoughts about how remote sensing has revolutionized what we know about Earth and how it changes over time.