Why should I download reduced size images from NEO?

Full size NEO images can be up to 3600x1800 pixels in size for global images. For speed and efficiency for other applications (classroom presentations, making animations or montages, etc.), we recommend resizing NEO images before downloading them. When you resize an image, the values will automatically adjust so that the aspect ratio of the downloaded image will be the same as that of the original data. To resize, select a fixed resolution in degrees: 0.1, 0.25, 0.5, or 1.0. In the 'Download Options' box, you can also choose to display your image in color or grayscale, and set the file type for downloading the image. Click on the question mark next to the 'Download Options' title to learn more about image sizes, color options, and file formats.

Sometimes NEO runs slowly or not at all. What can I do?

NEO can be a bit fussy at times, but we think it's too good of a tool to abandon for a little inconsistency in performance. We suggest having a backup plan. Try downloading images ahead of time to keep in a folder or on a CD just in case the NEO website is misbehaving when you want to use it with your students.


If I want to download multiple images from NEO, is there a more efficient way to do it than grabbing them one at a time?

Unfortunately, the answer is no. Downloading individual images can be painfully time consuming, but it is necessary. If you need a motivation boost, take a look back at some of the great animations people posted in Week 3. Totally worth it, right?


Besides monthly datasets, what else can I get from NEO?

On the right-hand side of the screen, just below 'Download Options,' you can find a list of matching datasets (with different temporal resolution) that are available through NEO. You can also use the 'Set Parameters' box in the upper right corner to refine your search by selecting coverage and/or date range parameters. Click on the question mark next to the 'Set Parameters' title to learn more about these options.

What does the "global" setting in the ImageJ 'Set Scale' box do?

When setting a scale in ImageJ, you may have noticed a "global" checkbox in the 'Set Scale' box. If you check this box, the scale you set for the current image will be applied to all subsequent images you open in ImageJ until you uncheck the box or set a new scale. This feature is useful if you plan to work with a large number of images that you know have the same scale.

Should I be worried about measurement errors when measuring large distances in ImageJ?

There's no one answer to this question, except "it depends." You should be cautious with ALL scientific measurements. The accuracy of measurements in ImageJ depends on the accuracy of the instrument, the spatial resolution, the overall size of the scene (including any distortions), the skill of the user, and many other factors. Done correctly and consistently, ImageJ measurements are generally pretty trustworthy. (How's that for a very scientific explanation?) It is most important to recognize and understand the sources of error and state them in your analysis.

Can you use ImageJ to slow down (or set) the speed of an animated GIF?

Apparently you can, but the results may be inconsistent. The GIF file format includes a frame rate specification. In ImageJ, this is the speed you set in the Animation Options dialog box. Of course, the maximum animation speed will depend on the software that's displaying the GIF, the speed of the computer, the size of the image, the number of frames in the animation, etc.

An example from Larry: Using ImageJ, I saved a 32-slice, 360x430 pixel stack at 50 frames per second (fps) as an animated GIF. In ImageJ, it animates at about 52 fps. When I opened it into Safari (Mac web browser), it ran at about 10 fps. In Firefox, it ran at close to the full 50 fps. When I pasted it into a PowerPoint presentation, it ran at about 25 fps. When I set the speed of the file to 5 fps, it played at about that speed in all applications.

Bottom Line—it can be done by setting the animation speed in ImageJ before saving as an animated GIF, but the maximum rate will vary.

Is ImageJ software recognized and used within the scientific community?

Yes. ImageJ was developed at NIH (National Institutes of Health) and is used by a wide range of scientists, from astronomers to zoologists. Fortunately, ImageJ has many easy to use features and is freely available, which also makes it a great tool for education and general image/photo processing tasks.


Where can I get a netcdf plug-in for ImageJ?

Get the netcdf plug-in for ImageJ here.

This is a rather complicated topic, so explore now at your own risk. We may explore this during the summer workshops if there is interest. As a teaser, here's a comparison of a GIF and a netcdf image from Giovanni. The latter isn't as pretty looking, but look at the type of pixel values we can get out of it (and use for analysis). Given enough time, I (Larry) could probably develop some sort of color table that would look better. This is a problem with very rich datasets— the numbers are all there, but it's difficult to visually display all of the data at once. (Note: there are several steps to get from the raw netcdf file to what you see on the right.)

Show me the GIF and netcdf images 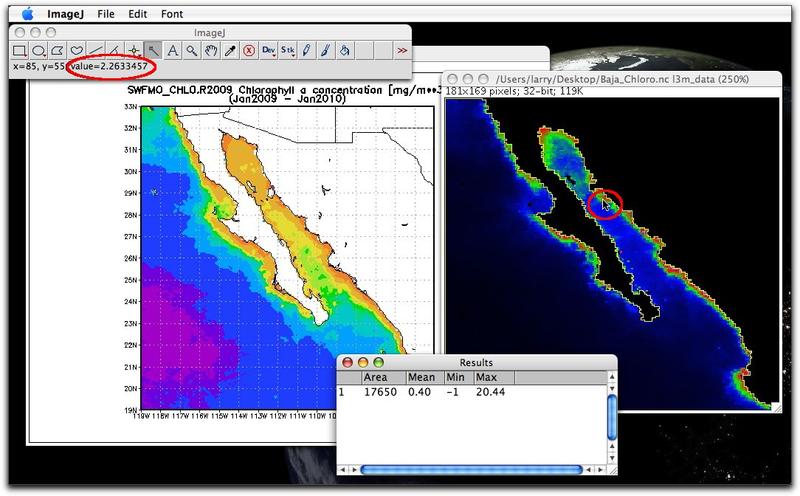 Why did the color bar in my Giovanni images go crazy when I made them into an animation in ImageJ?

When you save a Giovanni animation as separate GIF image files and open and stack them in ImageJ, all of the images get the lookup table of the first image. (A stack can only have one lookup table.) The rest of the slices then have the wrong color assignments. The technique described in the movie below, gets around this problem by copying and pasting the pixel colors into ImageJ in RGB format, so like colors are coded the same in every image.

Show me the video

I had a hard time understanding some of the Giovanni data set descriptions. Where can I find this information at a reading level that is appropriate for both me and my students?

Although Giovanni is tool that can be used for educational purposes, at its core, it is a scientific research tool and documentation can be rather technical in places. To find simpler explanations of the data, we suggest taking a look at NEO. Many of the data sets that are available in Giovanni are also available in NEO (though not all). Select the data set you want to learn more about using the tabs at the bottom of the NEO map. Then click on the 'About this dataset' link located below the dataset title. Use the more/less detail buttons to increase or decrease the reading level.

What is the difference between TIFF, JPEG, GIF, etc.?

Check out Digital File Types Explained for information about different image file types and how to choose the best one to suit your needs.

Is Google Earth considered to be a trustworthy source?

Probably. When using Google Earth, you may notice image sources near the bottom of the window. You may also notice, that many of these sources appear to be government agencies like USGS or NASA, which we would probably all agree are pretty reliable sources. However, in addition to using data collected by airplane and satellite, Google Earth also gets some its data from more unusual sources like hot air balloons, model airplanes, and even kites.

Larry had a great suggestion for testing Google Earth's accuracy with your students. Take a physical measurement of something outside your school. Then, use Google Earth to zoom in on your school and use the Google Earth measuring tool measure the same feature. Compare the two measurements to see how closely they match up.

Will I be able to access course materials after the course ends?

Yes! The week-by-week course materials will stay just where they are indefinitely. After the course ends, your discussion threads will move to a new location, but they will be archived somewhere and we will let you know how/where you can access them when the time comes.

When will we get more information about the optional graduate credit and summer workshop?