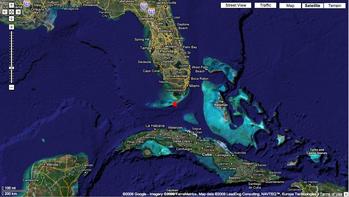 The Florida Keys Reef Tract is the third largest living coral barrier reef system in the world behind the Great Barrier Reef in Australia and the Mesoamerican Barrier Reef System off the coasts of Mexico, Belize, Guatemala, and Honduras. It is also the only extensive reef system in the continental United States. Several state parks and sanctuaries were established in different parts of the Florida Keys to protect coral reefs starting in 1960. In 1990, the Florida Keys National Marine Sanctuary was established, incorporating the preexisting Key Largo and Looe Key sanctuaries. The Florida Keys NMS currently protects 9947 km2 of coastal and ocean waters through several protective measures, including prohibiting oil exploration, mining, or activities altering the seafloor, restricting large shipping traffic, and restricting anchoring on, touching, and collecting coral.

In this part of the lab, you will examine data from the Florida Keys to determine if and how bleaching has affected this reef. You will then compare data from several other coral reef sites.

In 2018, a research study, publishing their findings in the journal Science, stated that the number of years between severe bleaching events had diminished steadily in the four decades between 1980 and 2016. In the early 1980s, the rate of severe bleaching events was once every 25 to 30 years but had become once every 6 years by 2016. The study looked at 100 reefs in 54 countries and used both published research and direct observations. This article Severe Coral Reef Bleaching Now 'Five Times More Frequent' Than 40 Years Ago is based on the findings. Your teacher may ask you to read this article.

1. Look at the Bleaching Alert data for the Florida Keys from 1985 to 2016 and take note of the different alert levels during that time.

2. Compare the bleaching alert data for two more of the following sites that you learned about in Lab 5:

5: Looking at the Florida Keys, does the data demonstrate an increase in frequency of severe bleaching events over the four decades between 1985 and 2016? Why or why not?

6: What two other sites did you compare? Did these two sites also show an increase in frequency of severe bleaching events between 1985 and 2016? Why or why not?

7: Do the Coral Reef Watch virtual stations do an adequate job of indicating all possible global bleaching events? Explain.