Scientists monitor coral health in a variety of ways. Sometimes they are able to take direct measurements, but at other times they must rely on remote measurements taken by satellites or on indicators such as ocean temperature or the presence of algal bloomsalgal blooms: the rapid excessive growth of algae, generally caused by high nutrient levels. Algal blooms can result in decreased oxygen in a body of water when the algae die, threatening the health of local marine life..

As you learned in Lab 4, the habitat of coral reefs is limited by several environmental factors. Climate change is currently altering those factors. 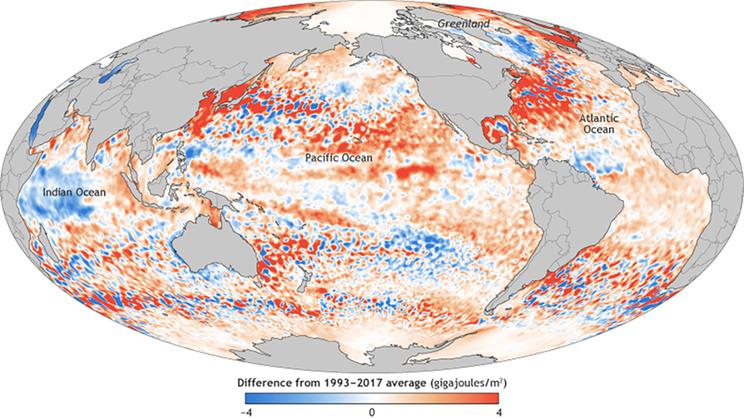 1. Examine the map showing the departure of ocean heat content from the average. Then, click here to Read more about Ocean Heat Content and answer the questions below.

What are some ways that measurements of ocean heat have been taken?

Show me the answers

What are some ways the heat energy moves from the ocean back into the Earth system?

Show me the answers

Hide
By melting ice shelves, water evaporation, and direct heating of the atmosphere.

As ocean temperatures rise, the sea level also rises. This is in part due to the thermal nature of water, which expands as it warms. It is also due to the addition of previously frozen, land-based sources of melt water, such as glaciers and ice shelves. 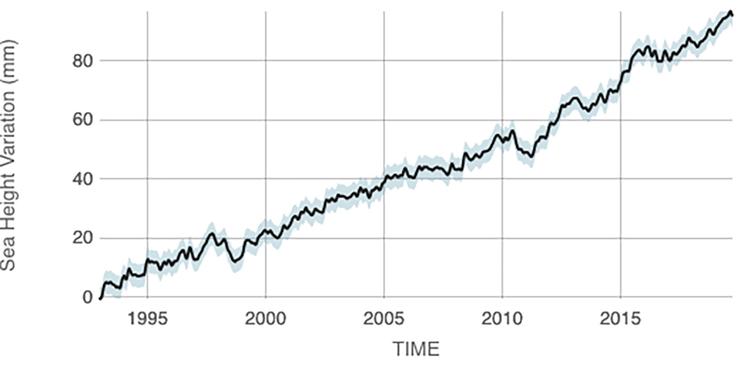 What is one of the effects of sea level rise on corals?

Hide
Increased issues with sedimentation; this can result from shoreline erosion but also increased turbidity.

The rise of global temperatures due to increased levels of greenhouse gases—namely carbon dioxide— in the atmosphere is a major concern around the world. But did you know that as the amount of CO2 in the atmosphere increases, the amount of CO2 in the oceans rises as well? In fact, estimates indicate that the oceans have absorbed as much as 50% of all CO2 released into the atmosphere by human activity since 1750. What does this mean for ocean life and coral reefs in particular?

1. Explore what happens to the ocean when CO2 content increases.

Show me materials needed for this experiment

2. Pour the bromothymol blue solution into the beaker. Observe the color of the solution. 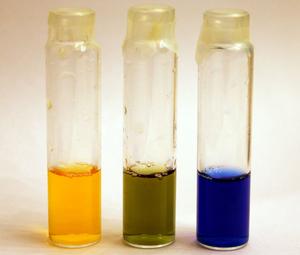 3. Take a drinking straw and place it into the solution.

4. Exhale through the straw into the solution. BE CAREFUL NOT TO INHALE ANY OF THE SOLUTION!

5. Keep blowing into the solution until you see a change in color.

What happened to the bromothymol blue solution when you added carbon dioxide?

7: Based on what you observed in the experiment, what effect do you think increased carbon dioxide levels have on the ocean? What consequences might this have for coral reefs?

6. Look at the image below showing the ocean's involvement in Earth's carbon cycle.

Based on the diagram, what is the net annual carbon intake of the oceans?

Hide
2 billion metric tons
8. Read the NOAA article Ocean Acidification: The Other Carbon Dioxide Problem to learn more about how rising amounts of carbon dioxide in the oceans are predicted to affect coral reefs.

Show me past and projected ocean pH levels

How have the oceans minimized some of the impacts of global warming?

Hide
By absorbing 525 billion tons of carbon dioxide from the atmosphere.

This short video is an illustration from a paper titled "Risks to coral reefs from ocean carbonate chemistry changes in recent earth system model projections" published in Environmental Research Letters in 2013. The researchers looked at projections of aragonite saturation in the oceans created by earth systems models (part of the CMIP5 project) and based on a business-as-usual carbon emissions scenario known as "RCP 8.5". This video displays the expected saturation for the successive years 1860-2100 for the first 30 seconds, then shows aragonite saturation as it compares to atmospheric concentrations of CO2 in Parts per million (ppm); the comparison of years to saturation levels repeats at 0:45. Coral reefs are marked in white on the global map.

What are the projected impacts of ocean acidification on coral reefs and other marine organisms?

Hide
When CO2 reacts with seawater, the pH of seawater is reduced, as is the availability of carbonate ions, which are important for the formation of the calcium carbonate shells of a number of marine organisms such as corals, marine plankton, and shellfish.

The change in ocean chemistry brought about by CO2 acidification poses more of a threat to coral reefs than simply diminishing the amount of carbonate ions available for reef formation. The higher acidity of seawater can also be damaging to existing reef structures. Think back to Part 3A when you added vinegar (an acid) to the calcium carbonate precipitate. A similar, though slightly less exaggerated, result will happen to corals—as acidity rises, coral reefs and other calcifying ocean organisms will actually begin to dissolve!

Emerging impacts of our acidifying oceans

Oceans Are Warming Faster Than Predicted

Deeply Invested: Coral Reefs and the Future of Florida 6:00