As you might suspect, ocean chemistry also plays a role in determining where coral reefs are found throughout the ocean. Both the amount of salt (salinity) and the the aragonite saturation (availability of calcium carbonate) in the ocean influence coral's ability to grow and thrive.

The water in the oceans is essentially a weak solution of almost everything. More than 70 chemical elements have been identified in sea water, generally in very small amounts. The most abundant salts in the ocean are chlorine, sodium, magnesium, sulfur, calcium, and potassium. Ocean salinity is affected by multiple factors including ice melt, inflow of river water, evaporation, precipitation, wind, wave motion, and ocean currents.

Examine the salinity map below. Click anywhere on the image to open a larger view in a new window. Click on the image again to further enlarge the image.

Answer the following question to check your understanding of the salinity map.

The map below shows the current state of aragonite (calcium carbonate) saturation in the world's oceans. Saturation is the point at which a solution can dissolve no more of a particular substance and additional amounts of that substance will appear as a precipitate. However, you can sometimes get more solute to dissolve if you change the conditions (e.g. increase the temperature of the solution). This type of solution is called supersaturated. Saturation level is represented by the Greek letter omega (Ω). When Ω = 1, the solution is saturated, and when Ω >1, the solution is supersaturated, meaning that there is more calcium carbonate dissolved in the water than is possible under normal conditions. The higher Ω is, the more likely precipitation (i.e., reef formation) is to take place. 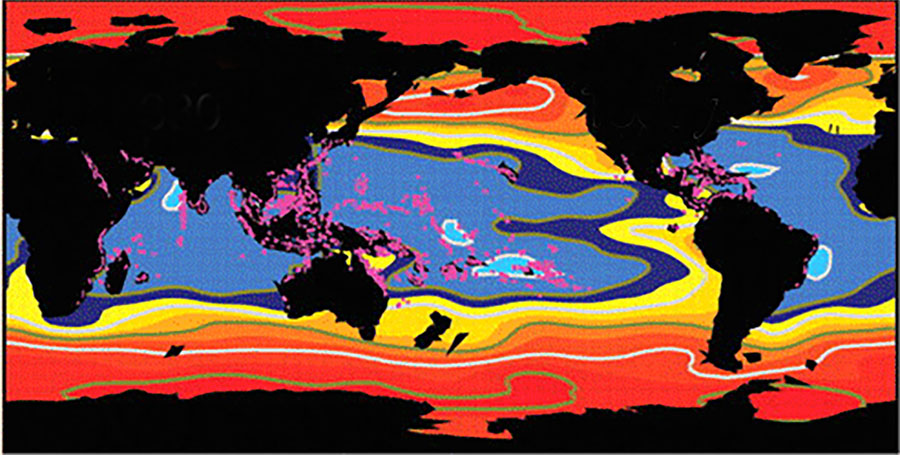 Show me how to interpret the scale

Answer the following questions to check your understanding of the aragonite saturation map.

6: Which of the ocean characteristics covered in this lab (temperature, depth, salinity, and aragonite saturation) do you think coral reefs are most sensitive to? Justify your answer.