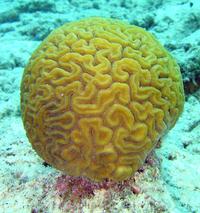 Animal, vegetable, or mineral? What exactly is coral? While corals might look more like rocks or plants, they are actually made up of tiny invertebrate animals, called polypscoral polyp: a small individual coral animal with a tube-shaped body and a mouth surrounded by tentacles., that are related to sea anemones and jellyfish. In total, there are more than 4,000 different coral species of various shapes, sizes, and colors.