Earth system science is the study of processes that move energy and materials among the pedosphere, hydrosphere, biosphere, and atmosphere.

Visualization of the Earth system as a set of four overlapping, interacting spheres. Click image to enlarge.

Hide
Image credits: Jennifer Loomis, TERC/Biosphere image provided by ORBIMAGE © Orbital Imaging Corporation. Processing by NASA Goddard Space Flight Center. Image source: Exploring Earth
Earth system science integrates a variety of other Earth sciences: geology, hydrology, chemistry, botany & zoology, and meteorology. The full Earth system is made up of four overlapping, interacting "spheres."
Keep reading to learn more about each of the four spheres and how they are connected to one another. 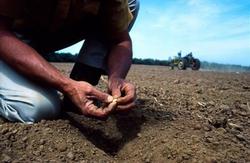 Image source: Planet Green
Soils make up a thin layer, called the pedosphere, that covers many of Earth's land surfaces. Although soil only accounts for about 10% of Earth's surface, it is a precious natural resource that deeply affects every other part of the ecosystem. Soils hold nutrients and water for plants and animals, filter and cleanse water, and affect the amount of water that returns to the atmosphere to form rain. The foods we eat and most of the materials we use for paper, buildings, and clothing are dependent on soils. Understanding soil helps us figure out where to build our houses, roads, buildings, and playgrounds.

Important functions of soil include: 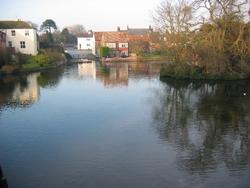 Image credit: Stephen Horncastle. Image source: Wikimedia Commons
Nearly three quarters of our planet is covered by water. All bodies of water including oceans, lakes, rivers, streams, and groundwatergroundwater: water beneath the earth's surface in underground streams and aquifers. Water in the ground is stored in the spaces between rock particles (no, there are no underground rivers or lakes). Groundwater slowly moves underground, generally at a downward angle (because of gravity), and may eventually seep into streams, lakes, and oceans. are part of the hydrosphere. The hydrosphere plays several very important roles in the Earth system. Water is essential for life. Many plants and animals call water their home, but all plants and animals need water to survive. People also use water every day for things like industry and transportation, recreation, and making electricity.

Oceans, which contain over 97% of Earth's water, help regulate global climate by absorbing large amounts of solar energy and circulating heat from the equator toward the poles through currents. Surface ocean currents are also affected by winds in the atmosphere. Energy from the wind gets transferred to the top layers of the ocean and helps circulate ocean water. Water is constantly moving between the hydrosphere, pedosphere, and atmosphere through plant transpiration (evaporation of water from plant leaves). 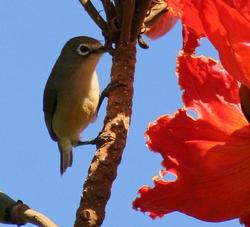 Bridled White-eye looking for bugs on this tree of brightly colored flowers. Image source: Wikimedia Commons
The biosphere includes all living things. Life on Earth exists in even the most unexpected places including inside rocks on and below the Earth's surface, beneath oceans and polar ice, and even floating in the air. Earth's unique weather and climate make it "just right" for life. The existence of life is what sets Earth apart from other planets in our solar system.

The biosphere also impacts climate. Plants use energy from the sun to undergo photosynthesis, a process that removes carbon dioxide from the atmosphere and adds oxygen. Animals (and humans) breathe in oxygen and exhale carbon dioxide. Human activities like burning fossil fuels or forests, also add greenhouse gases like carbon dioxide to the atmosphere. These gases can trap heat and keep it from escaping into space, thus contributing to an overall warming of the planet.

Connections between the biosphere and the hydrosphere and pedosphere are also extremely important. All living things need water to survive. Many plants rely on soil for valuable nutrients, and in turn, people and animals rely on those plants for food. 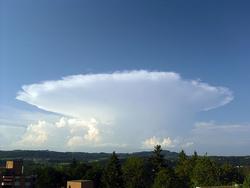 Photographer: Simon Eugster. Image source: Wikimedia Commons
The atmosphere is more than just the air we breathe. It also includes wind, clouds, and precipitation. This thin layer of gas that envelops Earth, traps heat to keep us warm; protects us from harmful radiation; drives ocean currents that distribute heat and help regulate climate; brings rain to thirsty crops; and much more.

The atmosphere also includes aerosols, which are tiny particles suspended in the air. Typical examples of aerosols include the salt in sea spray, smoke from fires, smog, and dust. Aerosols can have negative impacts on human health. Changes in air quality due to increased concentrations of aerosols can worsen heart and lung diseases like asthma and bronchitis. Aerosols sometimes collect or get deposited in soil and bodies of water, which can lead to acidification and extensive ecosystem damage. The presence of aerosols in the atmosphere can also influence Earth's radiative balance and climate by scattering incoming sunlight, destroying ozone in the stratosphere, and increasing cloud formation.

1: Name something from each of the four spheres of the Earth system (pedosphere, hydrosphere, biosphere, atmosphere) that you interact with every day.

2: How do those things impact your life?