When Albert Wegener first proposed the idea of continental drift, many scientists viewed him as the laughingstock of his day. Except for the "coincidental" fit of a few coastlines and some interesting fossil distributions, most members of the scientific community could not accept that continents moved, because they saw no evidence of motion. Today, Global Positioning System (GPS) technologies are providing direct evidence of plate motion. High-precision GPS data document tectonic motion, and these data are being used to refine models and create visualizations that convey our current understanding of plate tectonics.

Most plates move less than a millimeter per day; this movement is imperceptible to human senses. However, this daily motion translates to 1-10 centimeters of movement over a year, and that yearly motion translates to 10-50 kilometers of movement over a million years. This slow but relentless motion eventually results in soaring mountains, rumbling earthquakes, and exploding volcanoes.

One place where plates have been moving for millions of years is the Pacific Northwest, where the Juan de Fuca plate dives under the North American plate in a process known as subduction. The region is called the Cascadia Subduction Zone (CSZ). Processes associated with the CSZ have generated the scenic landscape for which the Pacific Northwest is known, including the rugged Cascades and Coast Range Mountains. The subduction zone is also responsible for large earthquakes, volcanic eruptions, and occasional tsunamis. 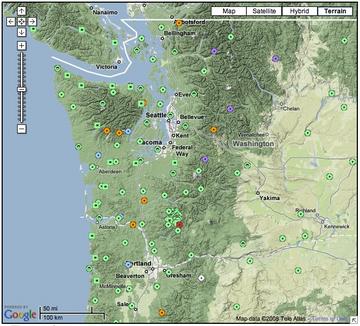 The Plate Boundary Observatory (PBO) collects location data from a network of continuous high-precision GPS units that are coupled to bedrock across the CSZ. GPS technology has matured to the point that it can be used to detect the very small daily motion of tectonic plates. When they were initially used for geodesy, GPS location data were collected only once per year. With motion averaged over an entire year, the details of events that happened on shorter time scales simply didn't show up. With the increased temporal resolution of the PBO network, we can examine fine details of short- and long-term geologic processes.

PBO data enable users to uncover the detailed movement and deformation of the "rigid" tectonic plates near the CSZ. Small differences in the motions of GPS stations can reveal locked portions of the subduction zone where stress is building and the earthquake danger rising. GPS stations can also detect surface bulging due to upwelling magma, perhaps giving early warning of important changes taking place under restless volcanos.

The precision of these data has also facilitated discovery of a newly recognized phenomenon called Episodic Tremor and Slip (ETS). Until recently, motion on a subduction zone fault was assumed to be constant in direction and speed between the time of major earthquakes. Scientists believed that accumulating tectonic pressure along a fault would continue to steadily deform the crustal rocks around the fault until an earthquake occurred, rupturing the fault and releasing the pressure. Now, GPS data have revealed a more interesting and complicated story. At regular intervals, GPS stations on the northern Cascadia margin have exhibited transient motions of 5 or 6 millimeters within a couple of weeks, implying deep fault slip of several centimeters. These transient motions are directed seaward, opposite to the direction of long-term squeezing of the coastal margin. Over the same time period, sensitive seismometers have recorded tremor-like signals that accompany these episodes of deep slip. While earthquakes usually last just seconds or minutes, this slow release of pulsing seismic energy occurs over the entire one or two weeks of slip. The total amount of seismic energy released in these events is large, on average equalling that of a magnitude 6.6 earthquake.

The significance of ETS events is currently being debated, but consensus is arising that they represent a fairly rapid release of some of the subduction zone's stored stress. This release can cause a transfer of stress to shallower faults. Some researchers are exploring how these events might aid them in the prediction of the next large earthquake in the region. As a result, ETS represents an important new observation of unexpected behavior on a subduction zone—one that wouldn't have been made without high-resolution GPS data.

In this chapter, you examine GPS data to explore plate motion and its relation to regional geology. Specifically, find the annual velocity vector of one or more PBO stations in the Pacific Northwest and plot them on a map. By compiling a map showing velocity vectors for several GPS stations, you can determine the general motion of the North American plate and explore the smaller-scale differences of motion in the region.