Case Study: When is Dinner Served? Predicting the Spring Phytoplankton Bloom in the Gulf of Maine 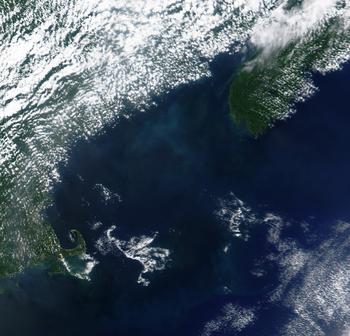 Phytoplankton bloom in Gulf of Maine, July, 2002. The bloom is 20 to 25 meters thick and contains nearly half a million tons of calcite. Image Source: NASA MODIS.

To a fish, nothing beats phytoplankton. Small fish eat the microscopic plants for energy and nutrients. In turn, bigger fish eat the smaller fish. Even larger fish (and humans!) eventually eat the bigger fish. As phytoplankton are at the base of this food chain, it is not an exaggeration to state that phytoplankton sustain almost all life in Earth's oceans. (Bacteria in some deep sea ecosystems provide an additional source of food for marine life, but that process is not addressed in this chapter.)

Like all plants, phytoplankton need sunlight, carbon dioxide, water, and nutrients to grow. Because sunlight is most readily available near the surface of the sea, that's where phytoplankton develop. Phytoplankton contain chlorophyll-a, a pigment that gives the microscopic plants a greenish color. Depending on the phytoplankton species and their abundance in a region, the color of the ocean surface where they are growing actually changes color, ranging from green to brown to red. When these colors appear, the phytoplankton are said to be in "bloom." The blooms, which are essentially dense concentrations of chlorophyll, can be detected in satellite images. Scientists study these images to monitor the ocean's biological productivity. Commercial fishermen and whale watching boats also access these images; where phytoplankton are blooming, dinner is served! Schools of juvenile fish, sand lance, mature fish, and whales may also be found in these areas.

Phytoplankton and the Carbon Cycle

In this chapter, you will gain an understanding of the critical role phytoplankton play in the marine food chain by predicting the timing of the spring phytoplankton bloom in the Gulf of Maine. You will access historical buoy data on water temperature, salinity, and density-variables that influence the timing of the spring bloom. These data are available from buoy monitoring stations in the Northeastern Regional Association of Coastal and Ocean Observing System (NERACOOS). You will graph these data and interpret them to predict when the bloom should occur. You will compare your predicted bloom date to the actual date by examining chlorophyll data. Finally, you will acquire MODIS (Moderate Resolution Imaging Spectroradiometer) satellite images of this region from the University of New Hampshire's Coastal Observing Center to see the phytoplankton bloom as viewed from 640 kilometers (400 miles) above Earth.