Case Study: Why Should We Care if There is a Hole in the Ozone Layer?

What is the Ozone Hole? 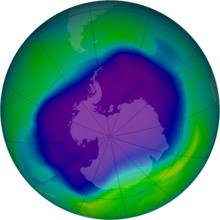 The "ozone hole" is an area where the amount of ozone in the upper atmosphere is much lower than normal. Measurements from satellite-based instruments show that this area of very low ozone concentration has developed over Antarctica every year since about 1975. Generally, the hole begins to appear when the Southern Hemisphere starts to warm up in spring (late September) and disappears during the hot days of summer (mid-December). The effects of the ozone hole aren't limited to Antarctica though... Every year as the hole "fills in," the ozone-depleted air drifts over populated places in Australia, New Zealand, and southern South America (esp. Chile).

The most immediate danger the ozone hole poses for humans is that with less ozone in the atmosphere, more ultraviolet (UV) energy reaches Earth's surface. UV energy, sometimes referred to as UV rays, can damage the eyes and skin of humans and other animals. For instance, data from Australia and New Zealand show that skin-reddening UV levels appear to be rising by about 10% per decade. Because exposure to high UV levels is a public health concern, newspaper, TV, radio, and internet warnings are issued telling the public to cover up or stay inside during midday hours on days when ozone concentrations are low and UV levels are exceptionally high.

The two most common problems associated with high UV exposure are skin cancer and cataracts. Cataracts are a condition where the lens of the eye clouds over, blocking light from entering it, resulting in partial or complete blindness. Among the 12 to 15 million people worldwide who are blind from cataracts, the World Health Organization estimates that "up to 20% of these cases ... may be caused or enhanced by sun exposure." These reports certainly make a good case for using an effective sunscreen on your skin and protecting your eyes with UV-blocking sunglasses. For more information about how UV affects humans, you can download the Practical Guide to the Global UV Index (429 KB pdf). (This link will open in a new browser window or download.)

In this chapter you will download images showing the concentration of ozone over the Southern Hemisphere, and learn to identify the Antarctic Ozone Hole in them. You'll analyze images of the hole during its maximum month, October, to see if and how it has changed over the past eight years. Using image analysis software, you'll highlight and measure the area of the hole each year, then export your results to a spreadsheet application and produce a graph of your measurements.