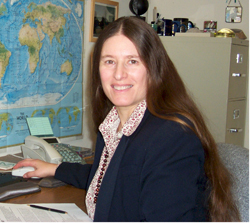 Dr. Tamara Shapiro Ledley conducted a research program in Earth system science with an emphasis on the polar regions at Rice University for 15 years, and has authored over 30 scientific papers. The focus of her research has been to understand the role of sea ice and continental ice sheets in shaping global climate conditions. Using energy balance models she has examined the impact of sea ice on the exchange of energy between the ocean and the atmosphere, and the implications of changes in the sea ice cover for local and global climate. Using energy balance and dynamic ice flow models she has examined the mechanisms that produce the growth and decay of ice sheets that define the ice age cycles on 100,000 year time scales.

Dr. Ledley has also been involved in Earth system science education activities that include developing museum exhibits that bring near real time images of the Earth to the public, directing teacher training programs in the Earth sciences, developing Earth system science learning activities for the GLOBE program, and developing scientific research programs for the participation of students. Most recently she has been involved in a number of projects that focus on the national digital library efforts and the facilitation of the use of Earth science data in educational contexts. Dr. Ledley has received NSF National Science Digital Library (NSDL, www.nsdl.org) grants to develop the Earth Exploration Toolbook (EET, serc.carleton.edu/eet) which is a digital library resource that provides step-by-step instructions for the use of an Earth science dataset and data analysis tool by teachers in the classroom; and to run innovative professional development workshops focused on specific datasets and analysis tools in the EET. She has also received NSF grants to lead the Digital Library for Earth System Education (DLESE, www.dlese.org) Data Services (www.dlese.org/people/info_dataservices.html) and Enhancing the Use of Data in Education projects which focus on bridging the communication gap scientific and educational communities; and the Tools for Data Analysis in the Middle School Classroom project which facilitates middle school teachers learning and adapting IT educational resources that feature Earth science data for use in the classroom. In addition, she is currently chair of the Standing Committee for Education, and has served as Vice-President for the Federation of Earth Science Information Partners (ESIP Federation, www.esipfed.org), an organization of over 90 organizations whose mission is to bring the wealth of archived Earth science data beyond the scientific community to the broader community. She is also a member of the Board of Trustees of the Foundation of Earth Science for the ESIP Federation

Climate Change and Greenhouse Gases Eos Vol. 80, No. 39, September 28, 1999, p. 453. This is an article supporting the 1998 American Geophysical Union position statement on Global Climate Change.
Correction: In the second paragraph of the section "Predicted Climate Change from Increased Greenhouse Gases" the last sentence states "...predict an equilibrium temperature increase of 2.0 +- 0.6C for simulations using double the current level of atmospheric CO2." Those numbers are actually those for the temperature change at the time of doubling. The equilbrium response as stated by Kattenberg et al. is 3.2 +-0.7C.
Note: AGU updates policy statements at least every 4 years. The position statement referred to in this article has been replaced by the updated statement: Human Impacts on Climate 2007. The original position statement "Climate Change and Greenhouse Gases" was publised in Eos, 80 (5), 49, 1999.