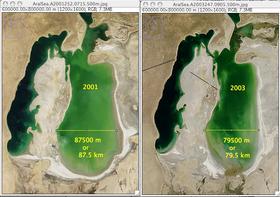 Example Output
Distances across the widest portion of the Aral Sea in September of 2001 and 2003. Click on image for a larger view.

The technique, tool, and datasets are appropriate for use by students in grades 7-14.

People often have trouble interpreting features in satellite images because they are unfamiliar with the scale at which they are viewing the features. The ability to measure these features and see the results in real-world units gives students a way to check their actual size, assisting them in the task of interpreting what those features are.

This technique can be also be used to quantify the study of satellite images. For images that show change over time, the amount of area that changed between successive satellite images can be measured, graphed, and analyzed. Because the dates of the satellite images are known, rates of change can also be calculated.

Satellite images are composed of a rectangular array of pixels, or picture elements. Each pixel represents a single measurement made by a satellite instrument, and each measurement corresponds to a specific amount of area on Earth's surface or in the atmosphere. Though we are limited to measuring across pixels on a satellite image, knowing exactly how much area is represented by each pixel allows the image analysis program to convert from pixels to real-world units. To set the spatial calibration or scale of an image, students enter the desired units of measure and a conversion factor that indicates the distance on the ground represented by each pixel in the image.

More About the Aral Sea

The following links may be of interest to teachers and students:

Teaching Resources
The following files may be used in class to save time downloading and stacking images. This completed spreadsheet file can be used as a sample, or as a way to assess student work for the optional section described in Part 3, Step 4. Note: student results may vary depending on where they selected a region to measure.