The Aral Sea in central Asia is drying up. Though it was once the fourth largest freshwater lake in the world, it has shrunk dramatically since 1960. This time-lapse movie shows its location and makes it appear as if it is shrinking as quickly as a puddle after a summer rain. Individual frames show the lake in 1973, 1987, and 2000. 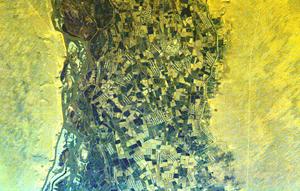 This image from the Space Shuttle shows a rich agricultural area along the Amu Darya River, just south of the Aral Sea. The thin river cuts through one of the world's most desolate desert regions, yet its 15 km-wide floodplain is covered with water-intensive crops like cotton and rice (click the image to see a larger view in a new window). To sustain these crops, irrigation projects remove water from the river and deliver it across the floodplain. Water from the river used to flow into the Aral Sea, but now it is all used up for agriculture before it reaches the lake.

Until quite recently, the Aral Sea was similar to North America's Great Lakes—it was a huge body of fresh water, filled by rivers that brought rain and snow melt to it from distant mountains. Since 1960 though, rivers that once flowed into the lake have been diverted to irrigate crops. With the decrease in the amount of water flowing into the lake, evaporation has became the dominant process. As fresh water evaporates from the lake and is not replenished, the amount of dissolved minerals (salts) in the water increases and the area of land covered by the water decreases.

The environmental changes in the lake and surrounding region have been dramatic and difficult. The change in water chemistry (increased salinity) wiped out huge populations of fish. The decline of the fish populations, in turn, wiped out the commercial fishing industry on the lake. Today, fishing boats sit in the desert many kilometers from the water's edge. The lakebed sediments (fine-grained sand and dirt) that are now exposed on the desert floor can be picked up by wind quite easily, contributing to large dust storms in the region. For further information, search for articles on the Aral Sea at NASA Earth Observatory World of Change or view the Earthshots article on the topic. You can obtain further information on the science behind these studies by consulting the lists of references that accompany these articles.

You may also want to view this 10-minute video from LiveEarthDotOrg available on YouTube.

Note: Here is the link in case you cannot view the video on this screen. http://www.youtube.com/watch?v=NC5UIEx83fo

In this chapter, you'll examine satellite images of the Aral Sea and make measurements to quantify how its size has changed. You'll download satellite images of the region then set a scale and measure the distance across the sea in 2001 and in 2010. On another set of images, you'll highlight areas that represent water and measure them to see how the area covered by the sea changed from 1973 to 2000.