Both stations are at sea level and both are near the ocean.

If you have trouble importing data into Excel or creating the worksheet pages and graphs, then download and use the KeyWest-GSOD.xls ( 4.4MB Jan17 11) file.

Monthly average GHCN temperature data for Key West is freely available from the NCDC portal, and can be downloaded in the same manner as the Barrow GHCN data. In the interest of time, the KeyWest_GHCN_1.xls (Excel 82kB Nov7 12) file is provided here for your convenience. Repeat the process used in Part 3 for Barrow, Alaska to graph the average annual temperature for Key West from 1948 to 2011, in degrees Fahrenheit.

Recall that the increasing temperature trend in Barrow was found using the linear fit line's slope. It was calculated by multiplying the slope of the line by the total number of years along the x-axis. This value from Part 3, Step 4, was 3.3 degrees F from 1946 to 2004.

Hide
The slope of the trendline represents the average change in temperature (in degrees F) per year. 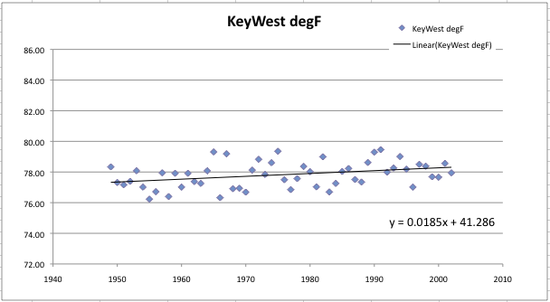 If you have trouble creating the worksheet pages, annual_average temperatures or graphs, then download and use the Key_WestGHCN_Part4_final.xls (Excel 151kB Nov7 12) file to complete the above graphing steps.

The map below shows the general trend that average surface temperatures are increasing faster in colder areas than in warmer areas. In the future, this could mean less land- and sea-ice in polar regions and less mountain snow, which becomes water for reservoirs in dry areas like Colorado and southern California. Predicted consequences of long-term climate change include the likelihood that plants that need a seasonal change will need to migrate to colder latitudes, or to higher elevations where there are mountains to "climb." In addition, scientists are concerned about the ocean becoming less salty with the melt of polar ice and that change this could affect ocean circulation, fish and other marine life. There is also concern about global sea level rise due to melting land ice. 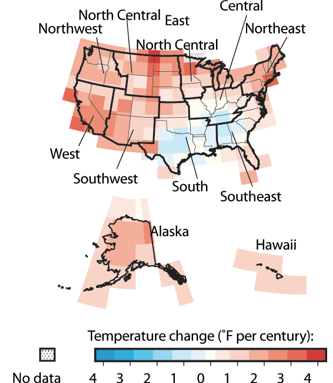 Scientists have modeled what the next hundred years of climate change may entail, and while it is generally characterized by rising temperatures, human behavior may influence how dramatic the changes may be. Assumptions based on population growth, emissions of carbon dioxide from automobiles and power plants, and many other factors contribute to what the IPCC calls "scenarios." A range of predictions result from scenarios that limit carbon dioxide emissions to current levels, to those that assume emissions increasing as they were in the year 2000. The two scenarios are identified below as "low growth" and "high growth." In either case, dramatic temperature increases are projected. 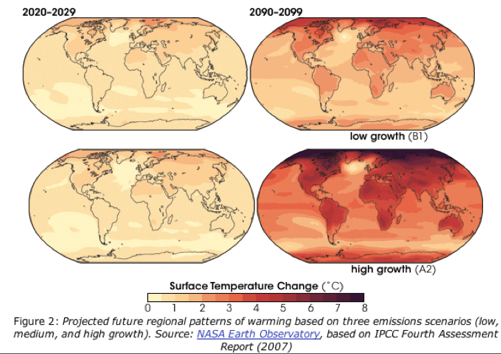